This page complements the IOT page.

For this, we used a WiFi module produced by Roving Networks. We used an mbed with an ARM Cortex-M0 processor for low power consumption, as our demo was fully wireless. We used standard sensors in mbed kits so we could utilize the libraries already written for them. Note that the hardware is irrelevant; any device with an internet connection and the right capabilities could replicate this demo. 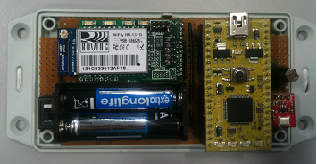