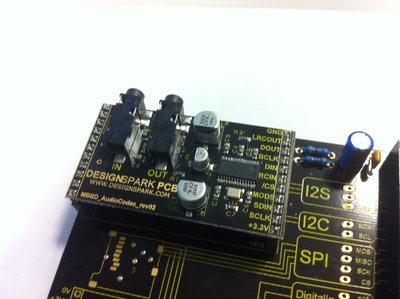 This page provides information and some examples for the use of the RS Audio Codec sub board, based on TI's TLV320 chip. This chip provides a high quality audio link out and in to the mbed with IO including: an amplified stereo headphone out, an stereo line out, a stereo line in and an pre-amped mono microphone input. Such a capable chip opens up a lot of options for high quality audio on mbed.

Using the WAVPlayer test exmaple, here are two example WAVs that the program will read from USB drive

If using a breadboard, the wiring is shown below.

This program doesn't need a flash drive or any files:

A test program for the TLV320, Generates some sine waves.

Both programs use the TLV320 library and the I2S library:

A well tested I2S library where the send and recieve parts are seperate instances.

A WAV library was written to make the process of playing wave files easier: