The MultiConnect® Dragonfly Nano offers developers an FCC and carrier certified solution that makes connecting sensors and other edge-of-network devices quick and easy.

The MultiConnect® Dragonfly™ Nano cellular SoMs are complete, ready-to-integrate processing and communications devices that offer developers the functionality of a SoM with the convenience of an onboard cellular radio all in one compact design. With its integrated Cortex M4 processor, developers can host their application and have access to a full suite of interfaces for connecting sensors or other remote assets. 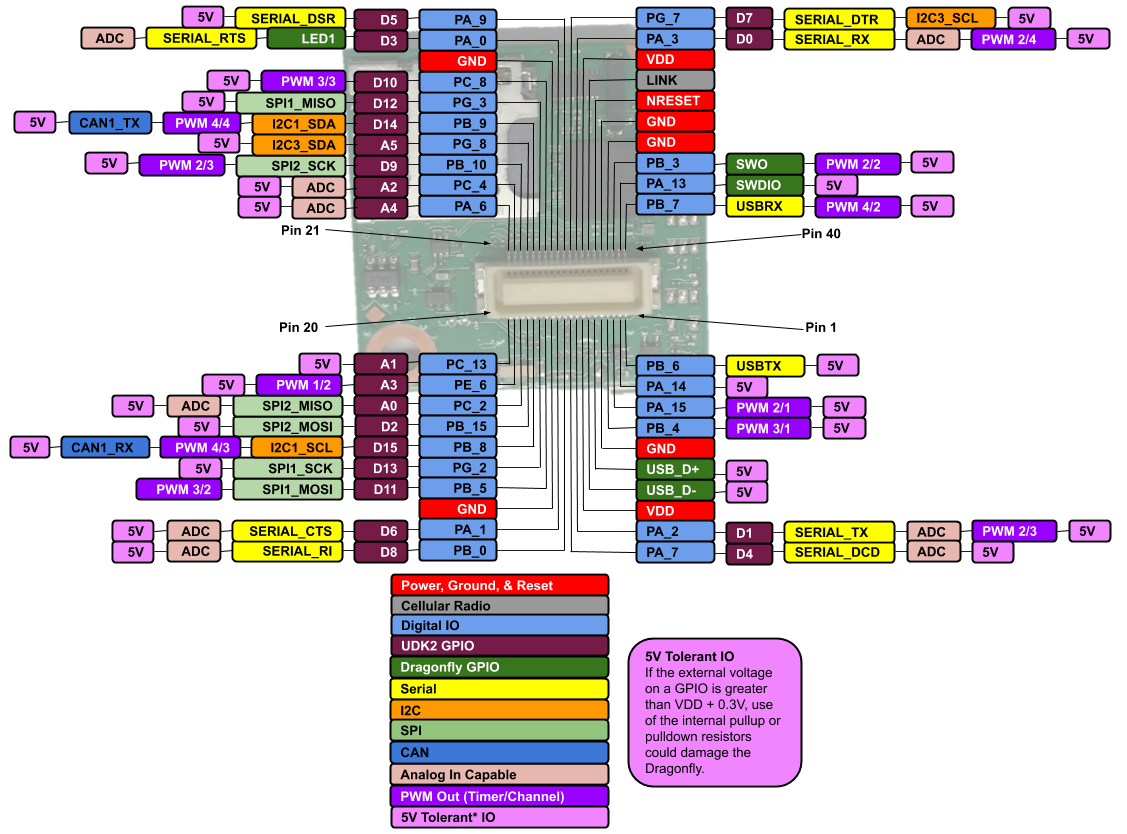 1. You will need a UDK2 Developer Kit¶ 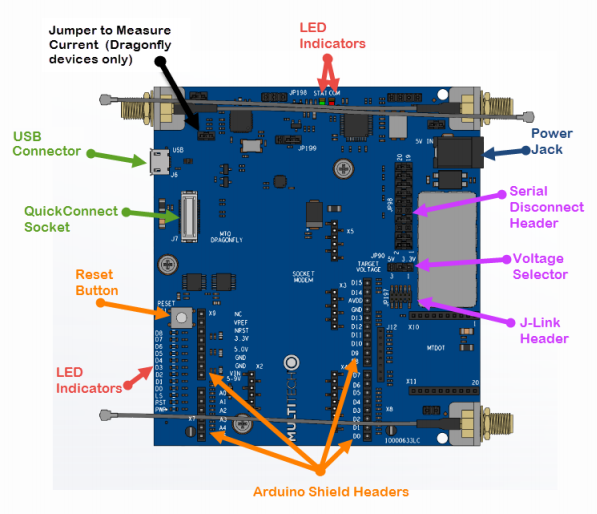 If you develop with mbed studio see 'Limitations & Issues' below.

Example programs can be used to quickly get up and running with Dragonfly Nano. Please read through the documentation included with the example applications.

At the time of this writing, the Official mbed cellular example calls for mbed-os vs 6.5. There are a couple pending mbed-os pull requests on github that should be available in the next mbed release.

1. mbed Studio does not recognize the Dragonfly Nano

1. Change the device ID the UDK reports to the PC

2. Change the device ID the PC associates with ID 0310, use the mock command on the mbed-cli command line

Mbed queries the cellular radio PDP context looking for a PDP type and APN match. You might need to adjust the PDP type that mbed accepts for this platform. In the file mbed-os/connectivity/drivers/cellular/MultiTech/DragonflyNano/PPP/SARA4_PPP.cpp, there are settings for PROPERTY_IPVx_STACK. In our testing, we have found that enabling only IPV4V6 works for all the SIM cards we have tested. If you have experiencing connectivity problems, you may want to enable IPV4 or IPV6. If you suspect such a problem it is suggest to enable debug messages.

To aid with debugging

For more information see the notes below section 6.3.1 of the STM32L471QG Data Sheet.

1. Change the device ID the UDK reports to the PC

2. Change the device ID the PC associates with ID 0310, use the mock command on the mbed-cli command line

The Dragonfly Nano ships from the factory pre-loaded with AT pass through firmware. This firmware implements serial passthrough providing AT command access to the cellular radio via the UDK 2.0 developer board or directly through the USB connector on the Dragonfly Nano

If you would like to use a bootloader with your application, there is one available for the Dragonfly Nano found here. The bootloader stores the new image for upgrade and the old image as a back up in the on board flash memory during firmware upgrade. The on board flash memory is 2MB. The STM32L471 flash space is 1MB. So the back up file consumes half the flash space. The flash file system used on the flash part consumes several hundred KB of space. So the new image is limited to the remaining flash space. If other files are placed in flash, there will be even less space available.

To compile a program for this board using Mbed CLI, use mts_dragonfly_l471qg as the target name.