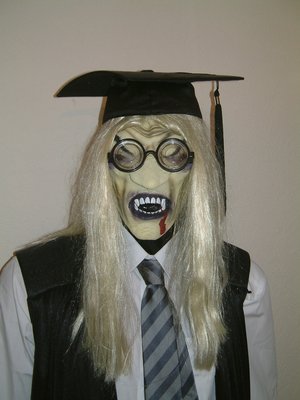 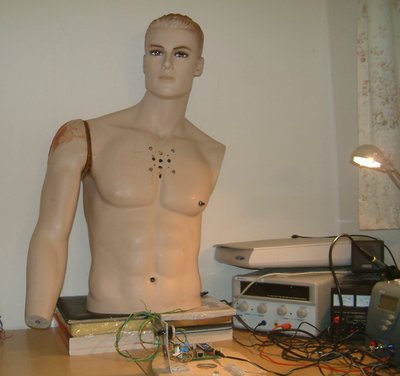 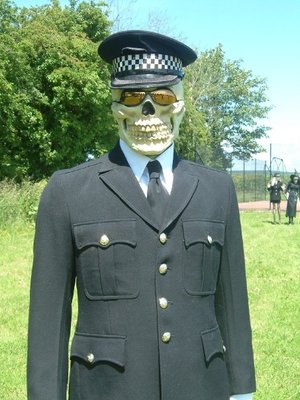 This project has evolved from a classic MCU design using an STR912 ARM9 based micro controller to an mbed design. The primary reason for the migration to mbed was a ready to go local file system which allowed for easier uploading of new audio files to the robot. The upgrading of firmware was also easier as the both the audio files and the firmware can now both be upgraded via the USB interface.

The male mannequin was a German produced mannequin made by Loutoff and available to purchase from Ebay. The mannequin cost about £70 and was chosen as it looked like there was a degree of freedom in the shoulder which could be motorized with a little redesigning. The plan was to produce a motorized arm that could be raised and lowered at will. The hand at the end of the arm could be used to hold a variety of object including walking sticks, radar guns and water pistols.

The software, after boot up, can be controlled via an external virtual RS232 connection via the USB interface. By plugging in the USB into the mbed module a virtual comm port is created. By using a terminal emulator such as windows hyper terminal or MTTTY and by setting the correct baud rate, the user can effectively communicate with the robot. The user can play specific sound samples, copy across sound samples from the virtual file system to the serial flash and can activate the motorized arm. The virtual com port allows the user to exercise all the features of the robot before the USB port is disconnected and the robot becomes autonomous.

When autonomous the robot periodically with play a tune from its selection of sound samples and sometimes move the arm. It is up to the user to control the behavior of the robot with his own software. For example you might want it to do something when the external PIR sensor detects an event or perform in a certain way after a specified length of time. I have dressed mannequin in various outfits and changed the software accordingly to get the correct response.

For example a traffic officer would want to raise his arm (with a speed camera in his hand) in response to an external event detected on the PIR detector. You might want him to say 'Please drive closely through the village' as he raises his arm.

A classical school master may want to raise his arm, with a cane in it, if he detects some one has thrown an object at him. He might want to say 'Who threw that, hands on heads everyone... it's your own time you're wasting' etc.

In your own application for a motorized parking post (for example), you could have a wireless key fob input trigger (instead of a PIR) which could announce 'please be careful of the moving post'. Other application include door entry systems, door chimes, motorized locks, motorized valve and sun tracking devices to name a few.

All of the electronics was built on the standard low cost prototyping board which Hitex has specifically made for the mbed module. These are available to purchase from RS.

The circuit diagrams for all project are available here: /media/uploads/DavidGilesHitex/mbed_robot.pdf

The wave files need to be 8 or 16 bit but can be mono or stereo. The sample rate can be different for each .wav file as the mbed software adapts to the sample rate dynamically.