Once you have created a prototype of your product, you may want to be able to use the developed code on a target MCU (NXP LPC) in situ in your end-application board.

This page documents the development of a LPC bootloader program which makes the following process possible:

Chris Styles already experimented with bootloading NXP chips in Prototype to Hardware. This carries out the desired process, but makes use of the Flash Magic flash utility. This requires the user to convert the binary file into hex and then put it through the flash utility. Hence, the process could be streamlined by allowing binary files to be directly loaded, which is now possible using this bootloader program.

In order to use the program, compile the program you want to bootload onto another chip and drop it into the mbed's filesystem flash with the suffix .LPC (in place of the standard pin names (PinName7, LED1 etc.), you can access any of the LPCs pins in the format shown in the compiler image above of P(Bank number)_(Pin number), for example P1_18).

Then drop the program below onto the mbed, and reset the mbed to flash it to the chip. Simple! (With some chips, you will need to alter the baud rate first, as 230400 is not supported by some LPC chips.)

Table of the LPC chips confirmed it works with (please add to):

I started off by leafing through the UM10360 datasheet, which contains the information on the current evolution of the mbed (LPC1768). As always, you should start by reading from the very beginning (of page 615). This chapter looks at the flash memory interface and documents the In-System Programming (ISP) which is the serial communication path used for this bootloader. From reading through it, you gauge what is required:

I used a Keil MCB1760 evaluation board as a 'breakout board' for my chip to bootload to (LPC1768 as well). This allowed easy access to the pins I required access to without any pixie soldering and conveniently gives me LEDs to flash to let me know when my work has been done. Well, that was easy. The MCB1760 had the ISP entry pin, P2.10, already pulled high, so I was lazy and just put in place a pushbutton connected to ground in order to pull the pin low when ISP bootloader mode entry was required. Now onto the software...

I developed the code on the mbed's online compiler and debugged the serial communications using a USBee SX with its accompanying USBee Suite software and drivers.
(If trying to replicate the debugging setup, ensure you set up an asynchronous (8-N-1) connection decoding into ASCII unless you're fluent in binary.)

I started off the code writing by looking at the section entitled 'Communicating with the LPC1768' in the Prototype to Hardware page. The communication with the LPC occurs via ASCII strings. I began by ensuring I could replicate the communication, so I opened up TeraTerm and began typing away.

Now all the necessary handshaking had been done. I could send it various letters as detailed in UM10360 to get such information as ID code and part number etc. but I was now happy that the hardware was set up correctly and I could confidently start putting pen to paper or finger to keyboard.

The code I used to set up the communication was very simple:

Next I turned my attention to the UU-encoding formula, documented very well on it's own Wikipedia page. It essentially consists of breaking down a file into ASCII lines of maximum length 45 raw bytes, performing a relatively simple operation on them turning them into 60 UU-encoded bytes, and then sticking a checksum (number of raw bytes sent + 0x20) at the beginning of the line and a carriage return(CR) and/or line return(LR) at the end.

I now turn to Wikipedia to explain the basic encoding operation involved in full:

The mechanism of UU-encoding repeats the following for every 3 bytes:

Note that if the source is not divisible by 3 the last 4-byte section will contain padding bytes to make it cleanly divisible. These bytes are subtracted from the line's <length character> so that the decoder does not append unwanted null characters to the file.

The encoding process is demonstrated by this table, which shows the derivation of the above encoding for "Cat".

So armed with my UU-encoding knowledge, I wrote a small program to carry out the conversion and explicitly show the process going on. Note the if statements at the bottom replacing any 0x00s with 0x60s. This is something I didn't discover on the first day and so I kept on getting slight discrepancies between my conversion and that provided by the online UU-Encoder I was using to check my output.

Type in 'Cat' and see for yourself that it agrees with the gods of Wikipedia.

Initially, I could only communicate successfully with the mbed by sending commands to it at a 9600 baud rate. It turned out that this was as a result of the echo which the chip automatically has switched on when reset. To tackle this, I introduced a previously developed SerialBuffered class into my program to extend the FIFOs present on the mbed and switched off the echo as soon as handshaking had been achieved (sending the command 'A 0(+CR)'). After carrying out these adjustments, I could take it all the way up to 230400 baud, which is the limit described in the LPC1768 handbook. I tried higher, but apparently and annoyingly, they're right :(

There is a small peculiarity in the process with which you carry out the encoding of the first block of data to be sent to the chip. This first block requires the 8th DWORD (a DWORD is a chunk of data consisting of 32 bits/4 bytes), to be the two's complement of the sum of the first 7 DWORDs. This is carried out by inverting all the bits in the 8th DWORD and adding 1 to it.

The code below is a slightly adapted version of the respective function in the final program at the end of this page. It carries out the summing, the two's complement creation (taking into account both little-endian and big-endian) and writes the altered first chunk of data to a temporary file called 'delete.bin'. Then this file can be opened, encoded and sent to the chip before reopening the original file and continuing from where it stopped before.

The overview of the communication protocol as given in the user manual is as follows:

These two paragraphs are vital to understanding the communication protocol and are fairly self-explanatory apart from the last bit. When the data fits in less than 20 UU-encoded lines, then the check-sum should be the sum of the raw bytes sent since the previous checksum was sent. The description given is too ambiguous and it would be nice to see a graphical explanation.

So for the bulk of the program from information gleaned from the user manual, the pseudo-code description (with example ASCII string commands+CR) is:

Each block of 1KB of encoded data consists of one normal block of 20 UU-encoded lines (45x20=900 bytes long) plus a smaller block of 124 bytes to make it up to the correct size. So I needed to include a case for when this smaller block needed to be sent. All I do differently is send the checksum earlier and pad any unrequired bytes in the last 3 to be UUencoded with 0x00s. The chip will read the 124 bytes, bringing the overall total it has received up to 1024 and then expect a checksum to be sent, so little has to be altered.

Then all that needs to be thought about is how to deal with reaching the end of the file. I had a counter that knew when the end was coming up and adjusted the copy to flash and write to RAM commands to specify that less data will be sent and then send the last few bytes.

Including the adjustment to the copy to flash and write to RAM commands brought up a few problems, and made the code a bit more complex, so in the end I decided upon sending only in 1KB blocks, but simply padding the rest of the 1KB which wasn't needed with 0x00s. The sacrifice I made to the speed of the program is a maximum of 1s, so I think I'll be able to sleep at night. 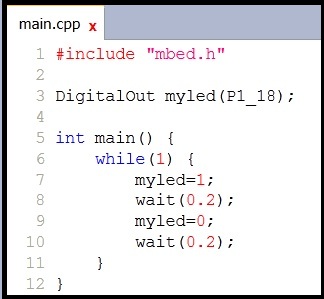 If anyone takes a keen interest in this project and uses it with different chip types, please add the confirmed successful chip types at the top of this page, where I've started off a table. In that way it can develop as a resource and the utility can be developed further, making it even more useful. I'm now heading back to university, but managed to get very close to hooking up a LPC1343 and a LPC1114 chip to the utility; just trying to iron out an odd bug, which lookw hardware-based, where all the command codes have been successful, but partway through sending the first 1KB block, the chips start sending back the code I sent to them...

If anything needs explaining, then feel free to comment below and I'll try to get round to answering any queries that crop up.