There has been a lot of questions in the forum about just how easy it would be to move forward from an mbed Microcontroller to actually use the target MCU (NXP LPC1768), avoiding the need to design in £30+ modules

Before showing just how easy it can be, there are a couple of points to make clear:

The purpose is to show you how you can get your binary into the LPC1768 on your own PCB, and what other things you can do.

The first thing to do is write a (very) simple program that prints "hello world!" to hyperterminal, and flashes an LED forever. I'll do this on an mbed module first, and then attempt to port it to an LPC1768 on an custom PCB.

I'm driving both ends of the LED as I have a PCB for an LPC1768 that i can port the binary to as an experiment, and doing the double ended driving is the simplest way.

Here is the code :

Here is the result :

I have a PCB that my brother has spun for an mbed project (programmable access controller). I have put down an LPC1768 and just enough passive to get it running. We'll now see the steps to go through to get the binary that was developed on the mbed prototype running on this LPC1768.

There are two ways to get a binary into the LPC1768; JTAG and the In System Programming (ISP) over a UART using the LPC1768s built-in serial bootloader.

The JTAG method is what you will find on a lot of development boards. It offers many additional features (debug, semihosting, etc) as well as just the ability to load the binary image. Using the JTAG port requires a JTAG "wiggler" to drive the JTAG interface, and some software that knows how to communicate over JTAG and load the binary.

The other method is ISP using the LCP1768 bootlaoder, which relies on a simple strategy:

Life is too short to craft your own way to transferring data by talking to the LPC1768's built in bootloader. Thankfully there are some great apps out there which will do it for you. For the purpose of this example I am using Flash Magic:

The first stop is to get the LPC1768 on the custom PCB into ISP mode, and communicate with it.

To bridge control the pins, and bridge the bootloader serial port to my PC, I will use my mbed as a serial passthrough and to drive the ISP and nReset pins. I'll refer to this arrangement as mbedISP.

Below is a wiring table of the four pins to go from the mbed to the LPC1768. the two devices must also share a common ground.

Now to try it out:

I should be able to type in ISP commands from the LPC1768 manual listed above, and get the expected response. I'll start simple by sending the "?" character which is for autobaud detection - the LPC1768 should reply "Synchronized".

First attempt, and it works better than I'd hoped for. I sent the "?", and immediately got "Synchronized".

I followed the manual, so sent back "Synchronized", recieved "OK", sent back "OK", and I was then free to play.

I kept it simple, I run commands J (to get the part ID) and K (to get the booloader version.

I can now communicate with the LPC1768 in bootloader mode, so it is now time to see if I can use FlashMagic to do the comms for me.

I have flash magic installed, it is a nice looking tool, but the first thing I notice is that it only support .HEX files, whereas the mbed compiler only generates .BIN files.

One quick google later, and a rather useful page appears about a BIN2HEX utility.

BIN2HEX does not work on 64-bit versions on windows.

I download the zipfile, extract it into C:\prototype then copy the binary I made earlier "prototype.bin". The first thing I notice is that when I try to convert this, it says it can't open the file, even though I autocompleted the file name. I think this has something to dowith 8.3 files names, so I rename my binary to "ptype.bin" and it works a treat. 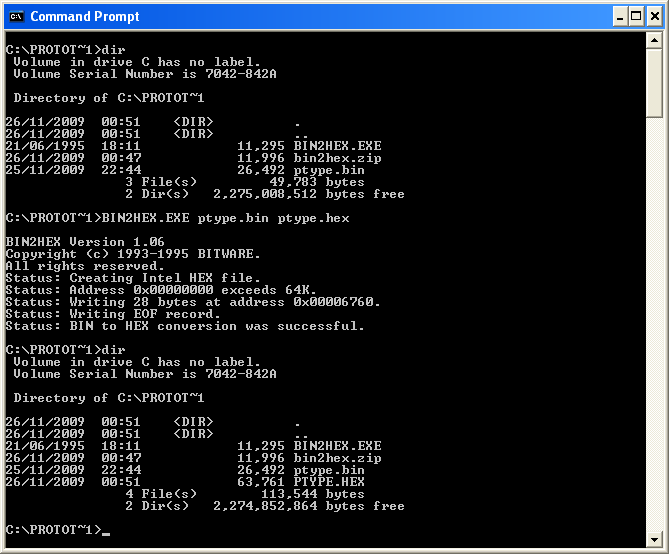 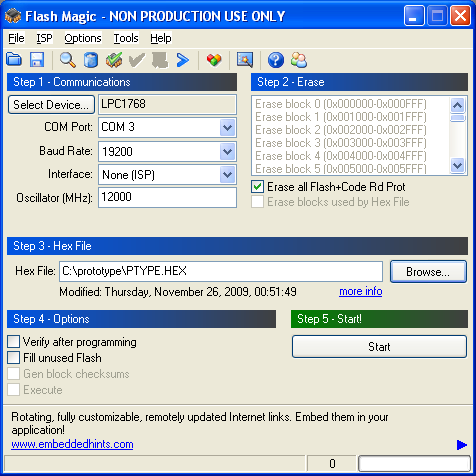 Flash Magic loads and there are a few things to configure, namely :

Before I try and download the binary, I notice there are some options, like read Device ID, so as a test i'll try that first. Bingo. It works! : 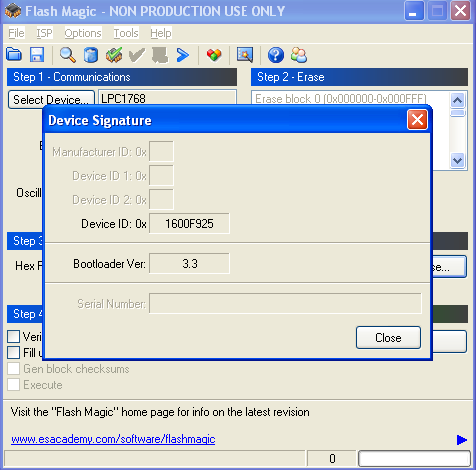 The interesting thing here is that it reports the bootloader version I got earlier and the Device ID as a hex number (0x1600f925). before I got 369162533 as a decimal... which happen to match.

Great, I am clearly communicating happily with the LPC1768 from Flash Magic.

It is complaining that the device signature does not match the expected. On closer inspection, it looks like I have actually soldered down an LPC2368 not an LPC1768 - the danger of having two almost identical parts to hand. No worries though. I go back to the compiler, and rebuild "prototype.bin", this time selecting the LPC2368 target - You've got to love the way you can choose which architecture to build your binary for with a dropdown menu. Instead of saving it to my mbed, I put it in "c\prototype" saving it as "ptype.bin", go back to my Command Prompt ("DOS", for the over 25's), and re-run BIN2HEX.

I reset the mbedISP so that it again awaiting the first character, and go back to Flash Magic, select the target as LPC2368 and try again.

Hurrah! Flash Magic runs through cleanly with no reported problems. I insert the LED into the two adjacent holes that connect to LPC1768 pins 74,75 (DIP pins p24,p26)....

The next thing you'll have noticed is that when prototyping we relied on the USB serial port for printing "Hello world". On the mbed microcontroller, when you print to USB, what you are actually doing is printing to UART0; this connects to the "mbed Interface" which routes it over USB. Now we are on a custom PCB, we dont have the interface to do that, but what we now have is printf coming out on the UART we're using for bootload. This means that any printfs in your prototype code now come out of your LPC1768 UART0, into the mbed ISP and get routed over it's USB serial. In short, you still have printf debug over USB :-)

So while playing with it, I have noticed a few things that are annoying, or could work better. The mbedISP controlling ISP and nReset seemed like a good idea, but it really isnt, for a few reasons;

This is the code and setup for mbedISP 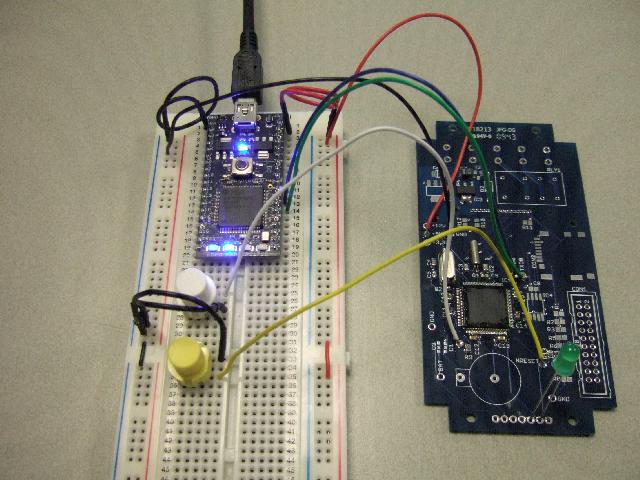 This is all working very nicely. Now if have access to the nReset and ISP, I can reset the LPC1768 as much as I want, and put it into ISP as I want.

The only think to look at now is the speed - it takes forever to download (45 seconds). So if I now chage my prototype program to set the serial port to say 115,200bps and set the mbedISP to do run both serial ports at this speed, we might be able to reduce the programming time, and make printf faster.

Wheesh... Downloading in about 6 seconds

Hardware convention To connect to an LPC1768 on a custom PCB we need to connect to:

I think we should assume that the target system must provide it's own power. This is a safe way to do it as then we dont have to make any assumptions about it's voltage or current consumption.

I have had a quick look around for a standard ISP pin header (I thought there was a 2x3 one at some point). If not I'd like to propose that anyone wishing to expose an ISP interface does so with a 1x5 0.1" header with the following pinout:

That way, it would be easy to make a little programming breakout board to post up on BatchPCB.

I think this experiment has proven that it is fairly straight forward to program an LPC1768 (or LPC2368, as it turns out) via ISP when it is on your own PCB.

I hope this page will serve as a good reference of how to go about this, please leave comments and feedback, and i'll tweek this page up as needed.

In the mean time, there are some useful resources :