The Mbed Online Compiler is now deprecated and we encourage you to switch over to our latest online IDE: Keil Studio Cloud.

API documentation is a quick and concise reference containing what you need to know to use a library or work with a program. It details functions, classes, return types, and more.

In mbed, API documentation for programs and libraries is fully supported both within the Compiler and in the code listings on the public site.

Browsing API documentation from within the mbed Compiler¶ 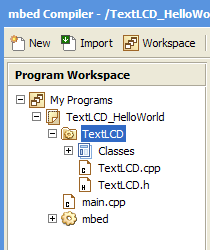 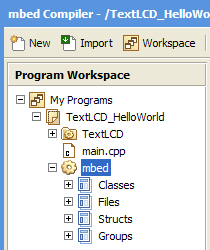 Each documentation group contains only the documented definitions for that group as follows:

Classes, methods, functions, etc which exist in the source code but aren't documented won't appear in the documentation.

The documentation preview contains references presented as standard links (default in blue) that point to sub-sections of the document or point to other documents, and which once activated would open inside the mbed Compiler.

The documentation groups and individual documents do not exist in your workspace. They are meta navigation items that reflect the API documentation as present in the library home page, and as such they cannot be moved, deleted, renamed, etc.

How to add documentation to your own programs and libraries¶

The documentation is created out of comment blocks in your code, usually located above declarations and definitions. Let's take the following example:

It's also possible to use single line comments starting with /// or //!.

It requires almost no effort to translate scattered comments in code into well formatted documentation descriptions!

Second important thing about the documentation process is the documentation markup to describe parameters and return values, but also to notes, groups, code examples and more. Doxygen accepts reserved words prefixed with \ or @, where some of the commonly used are:

Here is an example of advanced documentation:

To generate documentation for the example above, you have to click the "Update Docs" menu item in the "Compile" dropdown like shown on this image. Once generated the navigation tree would refresh and the formatted documentation would look like on the image below (click to enlarge). 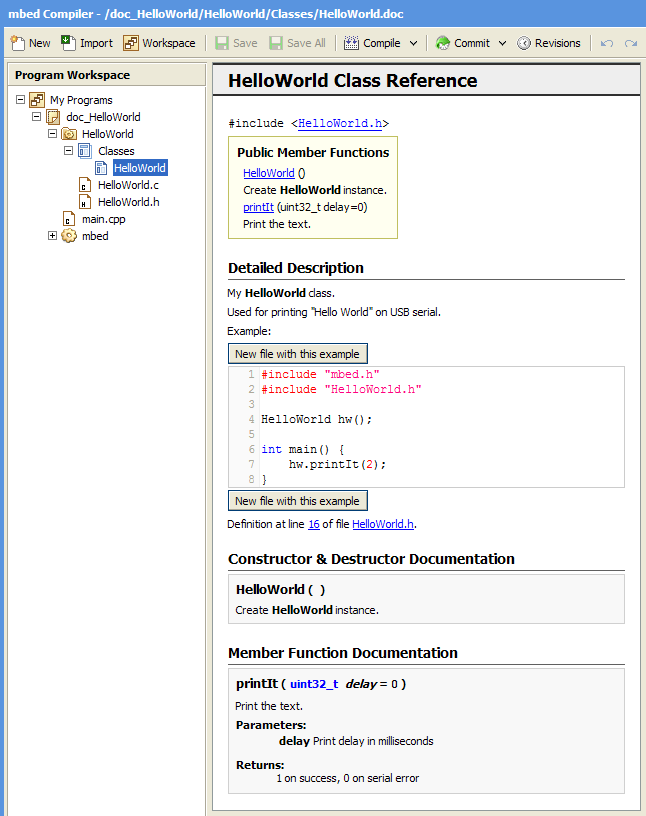 Congratulations! You now know how to document a library.

These are done using the library macro and the URLs of the documentation you wish to pull in:

Each public documentation page has a handy Embed code box which you can copy and paste into your wikipage.

Note the difference URL above with 'tip' and the one with a mercurial revision hash. Linking to documentation with a 'tip' URL will mean that the page will always show the latest documentation for your library.

Last but not least, few notes about Doxygen as being the core of the documentation generation in the mbed ecosystem:

There is so much more to be said about API documentation that isn't covered by this guide. How it improves direct and indirect collaborative development of complex programs and libraries. How the documentation preview can improved even further with groups, brief descriptions, etc. No doubt that documenting a code is an added effort on top of the code development. But if that extra effort could enable everyone to efficiently utilize the code and its features, then may be that effort is as important as the code itself.