So after a good session during the day, it was time to step up to the big stage in the Main Marquee.

Chris presented a more in-depth talk about the Internet of Things, 3G Mobile and even included live coding demos. Even with dodgy Wi-Fi, the talk went well and had some good questions from the audience. Well done Chris!

Ashley, who we shared the session with, gave a full teardown of the SMS printer and a VGA Camera prototype, that captured images and posted them online over 3G using HTTP. Excellent applications for the 3G Dongle.

Throughout the day there were a mostly sessions about mobile app and web development - so it was awesome to see that people were so interested in embedded development as well - especially after they saw the online compiler and APIs. We got lots of great feedback, and positive comments and mbed. 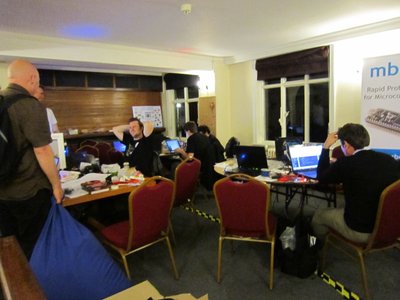 So at nightfall, as with any overnight hacking event, the fun begins! We had all of our hacking stations setup, and constant stream of people interested in building something. Hoping to have some impressive mbed prototypes submitted for tomorrows competition.