This article is about an outdated version of Mbed OS. More information about memory optimization can be found in the following blog posts: Reducing memory usage by tuning RTOS configuration, Reducing memory usage with a custom printf and newlib-nano and Where did my flash go? Visualizing linker statistics. Mbed OS also supports runtime memory tracing and runtime memory statistics.

Three months ago we released mbed OS 5, the latest version of our operating system for microcontrollers. While we added a lot of new features - including an RTOS - we also saw a bigger than expected increase in flash and RAM usage, two things that are scarce on embedded devices. Reason for Vincent Coubard, Senior Software Engineer on the mbed team, to dig through the .map files and see how we can decrease memory usage in mbed OS.

First, we need some baseline numbers. When compiling blinky - a simple program that just flashes an LED - on mbed 2.0, we see about 5K static RAM, and around 38K flash used (compiled with GCC 4.9.3 on the FRDM-K64F):

When we compile the same program on mbed OS 5.1.2 we see a large increase in both RAM and flash usage, to almost 13K static RAM, and about 57K flash:

To see where that memory went we can first look at how memory usage is split between different modules:

Most of this is normal; we're loading the hardware abstraction layer and the RTOS, but we also see features/frameworks. That is weird, as that is where our test tools live. We happen to build one of our test harnesses into every binary. What a waste! By eliminating this module we save about 1K of RAM and a whopping 8K of flash:

The next target would be the Misc module with around 28K of flash used. When we look at a visual representation of the memory map for our program, we see the UART driver and various functions related to printf being compiled in. That is suspicious, given that we are not using either in our program. 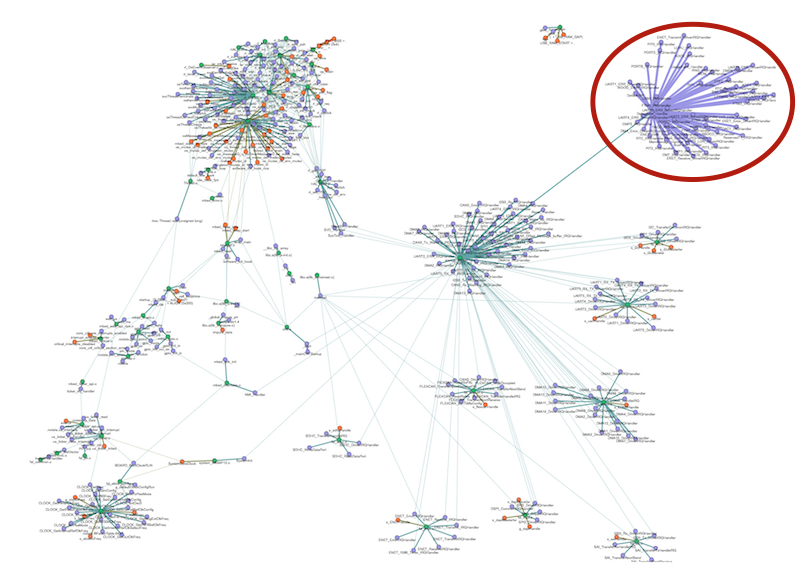 Visualization of our memory map showing the UART and printf functions in the top right corner.

We found that this was related to how we do traces and assertions in some of our modules, always redirecting error messages to printf. Whenever someone uses a single printf we need to compile in both the library and the UART driver (for serial communication). That is a huge overhead for something that is not actually used. While traces and assertions are very useful during development and in debug builds, we want them completely removed in release builds.

To disable this feature you need to set the NDEBUG macro and the following configuration parameter in your mbed_app.json file:

Some more information can be found in this comment.

Note: Different compilers, different results; when compiling with ARMCC the printf and UART libraries only cost 14K of flash.

No need for destruction

We can also take advantage of the fact that we run our programs only on embedded targets. When you run a C++ application on a desktop computer, the runtime constructs every global C++ object before main is called. It also registers a handle to destroy these objects when the program ends. This is injected by the compiler and has some implications for the application:

When we run an application on an embedded device we don't need handlers to destroy objects when the program exits, because the application will never end. By removing the registration of destructors on application startup, and by eliminating the code to destruct objects when exit() is called, we can shave off another 2.5K of RAM and an additional 8K of flash:

Together these three optimizations gave us a huge decrease of both static RAM (47%) and flash (2.69x less) usage. Compared with mbed 2.0 we use 3K more RAM - which is mainly due to the inclusion of mbed RTOS - but we use only half the flash. We'll continue to make improvements on this in the near future. All patches have landed and are included in mbed OS 5.2.

1 answer
How did you visually represent the memory map?