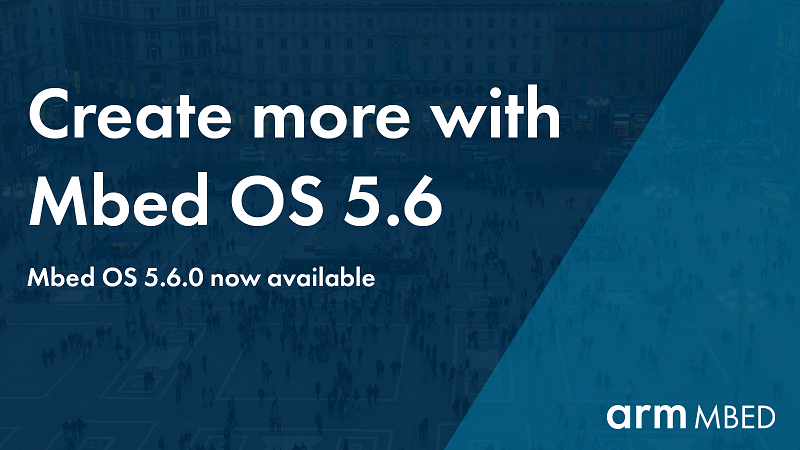 The Arm Mbed OS 5.6.0 release helps to further simplify the Internet of Things (IoT) and embedded product development with the addition of several new features, such as tickless RTOS scheduler support to enable long periods of low-power sleep and IPv6 support to cellular stack to provide enhanced web connectivity. The release also adds several new drivers and platform APIs, support for IAR Embedded Workbench v8.1, and hardware security enhancements. In addition, this release contains many minor fixes and enhancements, as well as brings support for 93 target development boards. In the release note below, we summarize some of the key updates to Mbed OS as a part of Mbed OS 5.6.0 release.

One additional change you may have noticed is developer.mbed.org is now os.mbed.com. We have updated our URL for consistency across the website. The community should experience no significant changes or issues due to this change, as all redirects are in place.

Power consumption is one of the most important design requirement for IoT devices. Meeting the power budget is becoming very challenging as the systems today include more sensors, faster responses and more connectivity. Mbed OS introduces the Tickless RTOS Scheduler to help achieve the design of low power systems.

Integration with Mbed OS: The Tickless RTOS Scheduler is integrated in the native OS and based on the low power ticker. The Tickless RTOS Scheduler is already integrated in the Ticker API available at https://os.mbed.com/docs/v5.6/reference/ticker.html . The specifications are released to help other boards support the implementation of the low power timer and Tickless scheduler. We are working with Mbed silicon partners to enable support for Tickless Scheduler on all Mbed Enabled boards.

Connected devices are growing at a fast pace, and according to Gartner, there will be more than 20 billion connected devices by 2020. As the number of IoT devices grows, the devices are becoming an increasingly attractive target for cybercriminals. Security is becoming one the most important product requirements for IoT devices. Arm has announced Arm Cortex-M23 and Cortex-M33 processor architecture, which includes TrustZone for Armv8-M and provides hardware-enforced isolation between trusted and untrusted resources while maintaining the efficient exception handling and determinism that have been the hallmark of all Cortex-M processors.

In the Mbed OS 5.6.0 release, we have also added several new drivers and platform APIs. Following are some of the notable additions.

NonCopyable Class: NonCopyable class allows the creation of classes whose objects cannot be constructed using a copy constructor or assigned to another. It forces the classes copy constructors to be private. More information is available at https://os.mbed.com/docs/v5.6/reference/noncopyable.html.

Apart from the features described above, Mbed OS 5.6.0 also includes several new features, improvements in current APIs and HAL specification to ensure cross platform support of all APIs. You can find all the changes on Github.

Mbed OS already includes the cellular point to point stack with IPv4 connectivity, and in Mbed 5.6.0, we are releasing cellular stack supporting IPv6. IPv6 is being widely adopted because it allows almost unlimited (3.4×1038) addresses, and IPv4 only allows up to 4.3 billion addresses. More information is available at https://os.mbed.com/docs/v5.6/reference/cellular-api.html.

Mbed TLS is an open source, portable, easy to use, readable and flexible SSL library. It enables you to include cryptographic and SSL/TLS capabilities in your embedded products.

Thanks to our partners’ hard work, Mbed OS 5.6 adds eight new target platforms and now supports 93 target platforms. We’ll continue to add targets in our biweekly patch releases as partners work with us on support.

Mbed OS 5.6.0 adds early support for the latest and most efficient version of the Arm compiler, the Arm Compiler 6. This version is based on the LVVM framework, optimized to best use hardware features. You can read about the Arm Compiler 6 at https://developer.Arm.com/products/software-development-tools/compilers/Arm-compiler. The current support for Arm Compiler 6 is limited only to the Mbed CLI tool, and we plan to migrate to Arm Compiler 6 as a default in Mbed OS release 5.7.0.

The release includes many general enhancements and fixes and upstreams those that have been maintained within the Mbed OS codebase itself. Please visit https://os.mbed.com/releases/ for the full list of changes and known issues.

The upgrade should be generally transparent to developers using the Mbed OS RTOS APIs, but please report in the forums or contact us at support@mbed.com if you have any issues in this area.

Mbed OS is designed to significantly reduce cost and time for embedded software development by providing production quality code and toolset. We are committed to delivering high-quality code working across all supported boards and platforms. To ensure that all the features of the code meet our quality control requirements, we have built an automated testing environment and processes that perform rigorous testing on the code. Following are some of the highlights of our testing framework.

- For every new feature, we create tests that we then deliver to our partners. For every board to be Mbed Enabled, we need our partners to successfully conduct these tests.

- Partners test the changes on their board before submitting a Pull Request (PR) on GitHub.

- Once the PR is submitted, then the gatekeepers manually review the code to make sure it meets all the coding guidelines and code standards.

- Once approved by gatekeepers, the code goes through the automated test setup where code is added to Mbed OS for testing and examples built across all the platforms, such as IAR, ARM and GCC.

- During the testing phase, we select the combination of boards and devices that support a variety of peripherals, MCU cores and features to select maximum coverage.

- To make sure that the Mbed OS code is compatible with all the IDEs, we test that the code exports properly to all the compilers.

- We merge the PR only if the all the above is successful. 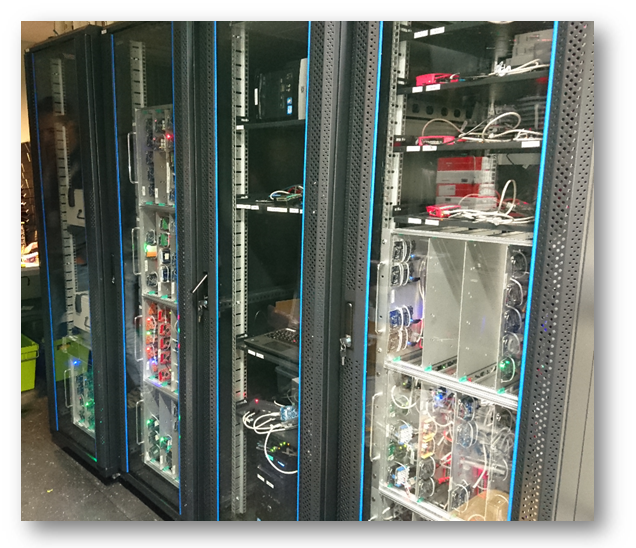 Above: One of the Mbed OS test farms.

Following are the summary results for testing conducted for Mbed OS 5.6.0:

· We have added 94 new test cases since the Mbed OS 5.5.0 release to test new and existing features on Mbed OS. The number of total test cases is 312.

We plan to share more details about testing processes, such as our out of box testing coverage and system testing, in upcoming release blogs.

You can fetch the latest version of the Mbed OS 5.6 release from the mbed-os GitHub repository using the branch https://github.com/ARMmbed/mbed-os/releases/tag/mbed-os-5.6.0.