We have some really big news. We didn't want to promise too much before it was all set in stone, but we've been working very hard to make mbed *real*, and I think we've done it!

We've teamed up with NXP and have been developing a version of mbed based on their new LPC1768 MCU, which gives us an upgrade to an ARM Cortex-M3 core, so there is even more performance. And best of all, the hardware design is now complete and we've got them going in to production as we speak!

And NXP have invited us to be on their stand at ESC Boston next week, so that means we'll be going live!

NXP are going to be selling these boards through some major distributors too, and they'll be available for pre-order next week.

We'll have a demo there too, and we'll put up a page about it soon, but hopefully it will be interactive :) To give you a hint, here is a little logo I just made: 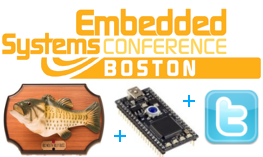 More info next week, and on our http://twitter.com/mbedmicro feed.

Thanks again to everyone who has helped mbed get this far. Hopefully this is just the beginning!