We thought it was about time to get time() working...

The mbed Microcontroller has a Real-Time Clock (RTC) on it, which is a built in hardware clock that can keep track of the time and date. We've now done the plumbing to make use of it sane, and you can now just use standard C functions to read, set and format the time. Ideal for data logging and other time related functions!

The basic function to read the time is named time(). This returns the time in seconds since January 1st 1970, often known as the UNIX timestamp. This is a fairly universal way to define time, and can be transformed in to other string forms using C functions. The function time() actually takes a pointer as an argument, but in most case you'll just want to pass NULL. Here is a most basic example to get the current time:

Of course, that isn't much use until the time has been set somehow, as the RTC won't have been setup. Here is the minimal way to set the time, in this case providing the UNIX timestamp:

A natural thing to want to do is display the time and/or date in a human readable way, either on a screen, in a file, or over a terminal. For that, C provides a number of functions to help do this. This example shows these functions in use:

The results of this are shown below: 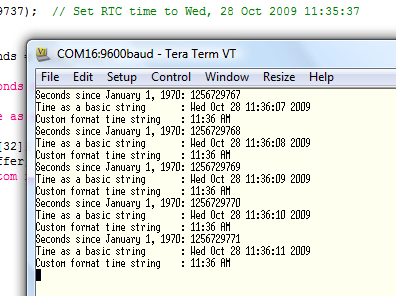 For all the string formatting options, see the list of format specifiers in the strftime function api documentation.

While we were testing, Rolf said he thought it'd be nice to be able to set the time from the terminal, so here is the final example for this post that does just that:

Hopefully this gives you a good insight in to how to use the RTC from software, but of course one of the nice features of the RTC is that it is designed to support a battery backup. This means just like your PC or various equipment around the house, the mbed can keep time even when the power is disconnected.

It obviously needs some source of power to keep the clock running, but it is very tiny and this is where the VB pin comes in. By connecting a 3V battery to this pin, the clock can be kept running for a long time with only a single coin cell (watch battery). Wire a 3v coin cell battery between VB and GND, and when you disconnect the main power (e.g. USB cable) the clock will continue to run: 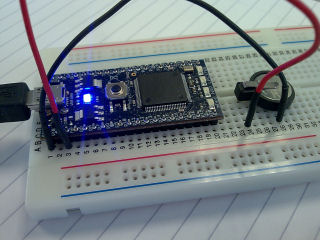 For full details of the time related functions, see the time API page:

To update to this new library version, as ever just start a new project or select the existing mbed library in an existing one and hit "Update". Please feedback any problems/questions to the forum.