When it comes to programming microcontrollers, the one scenario that you never want to face is a device that suddenly hangs. It's already very frustrating while you're developing software, and tracing down these bugs can be very time-consuming; it's even worse when the device is already deployed in the field. Replicating the exact conditions in which the device failed can be almost impossible in the lab, especially when the failure manifested itself months after deployment.

Fortunately, mbed-enabled hardware ships with CMSIS-DAP or its successor DAPLink, which allow you to directly hook into devices using the built-in USB ports (on developer boards), or a debugging probe like SWDAP. CMSIS-DAP is responsible for mounting your mbed board as a mass-storage device for easy flashing, but it can also be used to dump the RAM and ROM of a running device, enabling you to do post-mortem debugging on a hanging device.

In this blog post we'll show you how to install all dependencies, crash a device, and subsequently do a post-mortem debug session. To follow along you'll need:

Note: Unfortunately, you may not be able to run the debug session in an unlicensed version of uVision 5. This depends on the size of your RAM, because of the debugger's 32 Kbyte program limit.

This article assumes knowledge of building applications with the mbed online compiler. If you're unfamiliar with mbed, read Getting started with mbed first.

Creating a program that crashes

Here's an application that reads from a pointer at address 0xfffffff when the button at SW2 is pressed. 0xfffffff is an invalid address, and reading from here is not allowed, so the core hard-faults:

Save the program and verify that it compiles.

Exporting to an offline toolchain

When you build an application with the online compiler you only get access to the firmware. If you want to do a post-mortem debug session you also need the debug symbols for this build. To obtain those you can export the program to an offline toolchain, and build locally.

Right click on your program in the online compiler, and select Export. 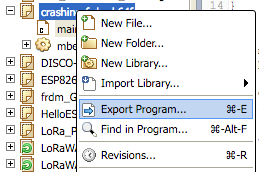 Choose GCC (ARM Embedded) as the toolchain and click Export.

A ZIP file with the source code of the application, all libraries and a Makefile is downloaded. Extract the ZIP file to a new directory on your computer.

Open a terminal and navigate to the directory to which you extracted the ZIP file. We can now build the program locally and obtain the debug symbols.

When the build finishes, your build directory will have either a *.bin or *-comibned.hex file, depending on your board. Use drag-and-drop to copy the file onto your board to flash the program.

The program starts running and blinks the LED (press the Reset button if the LED does not start blinking). Now press the SW2 button to crash the board.

Now we can put the dump_firmware_classic.py Python script to good use. Run the script with the crashed device plugged in:

A crashdump folder is created. It contains debug symbols, the RAM and ROM of the device, and a uVision 5 project file.

Double click on the project file to open uVision.

In the Disassembly panel we see that we're in the HardFault_Handler, which is expected. We can drill down into the stack by selecting Debug > Step. 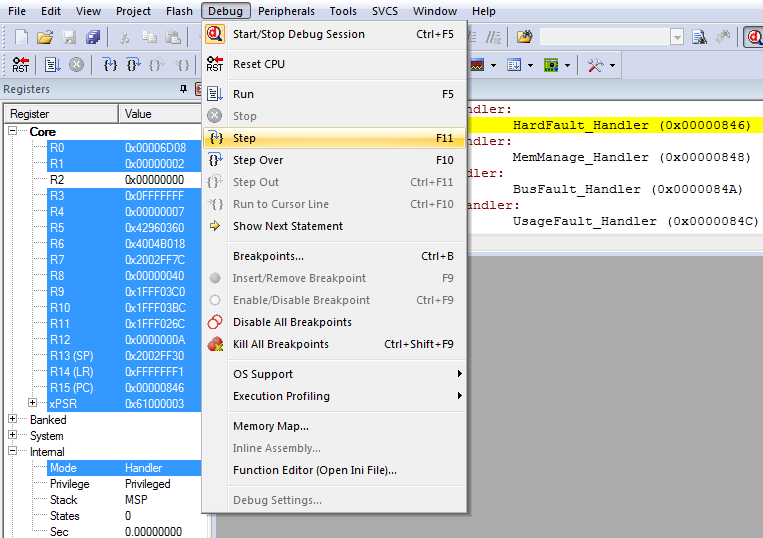 Now we get more information about the state of the application. On the right bottom corner we see the Call Stack that led up to the crash. We can see that we passed an interrupt (handle_interrupt_in) and that we went through one of our own functions (btn_interrupt) right before the device hard faulted.

Now that we found the function we can also find the actual line that our application crashed on. In the Call Stack panel, right click on btn_interrupt and select Show Callee Code.

When we read the assembly we see:

On the last line before the crash we tried to read from registry R3 (0x0FFFFFFF) into registry R1. We also see that right after that, we called the printf function. This maps perfectly to our C++ code, and we found the line which crashed the device.

This approach can be used for more than just debugging hard faults. We can also use it when a device hangs because it entered a never-terminating loop. Let's look at the following code:

Here turns will always be greater than -1 (because turns is a uint8_t), so the device will never exit the loop. When we start a post-mortem debug session, we can immediately see the function that we are currently stuck in:

And if we're lucky, we can even see the values on the Call Stack, showing that turns overflowed and is now 0xED.

CMSIS-DAP on ARM mbed can be a tremendous help with hard to find issues. The ability to recover a crashed device from the field, and use post-mortem debugging on it, is a great addition to the toolchain of every developer. If you want to learn more, there is a KEIL application note on Using Cortex-M3 and Cortex-M4 Fault Exceptions.