After the release of the Pull requests feature, the focus with the mbed Compiler has shifted towards improving the code editing experience. We are happy to announce a new set of features aimed at enhancing the Editor capabilities in the mbed Compiler. These features are now live.

Here is a sneak peek of the main feature: 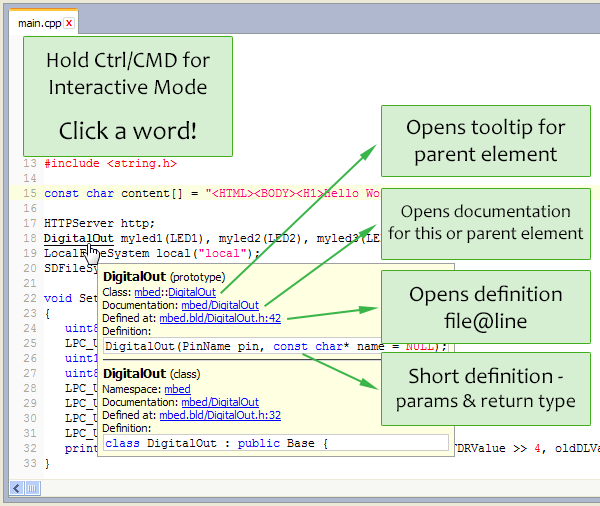 The Interactive mode is a new way to interact with the mbed Editor for easy and quick information lookup about a code element. The mode is triggered by tapping and holding the Ctrl key (Command key on Mac) and moving the mouse cursor over text elements like words, numbers, hexadecimals or even URLs. Valid elements will be underlined when hovered and can be clicked. Depending the element type the Editor will respond differently:

The feature shows results based on the existing code saved in your workspace, meaning that the definition results may not reflect the contents of any unsaved files.

Other features in beta

These changes have now been rolled out to all users.

These are great updates, thanks.

Just had to do two days of coding, and there was a real productivity boost by the build process not recompiling libraries and the IDE having previews of function signatures.

These are great updates, thanks. Just had to do two days of coding, and there was a real productivity boost by the build process not recompiling libraries and the IDE having previews of function signatures.

These changes are great! Nice one!!

These changes are great! Nice one!!