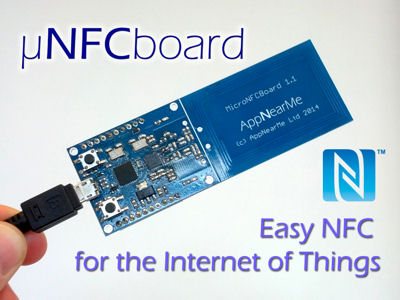 Have you seen the recent Kickstarter, MicroNFCBoard? Well the creator is one of mbed’s very own, Donatien Garnier. Donatien is a former mbed intern (from about 4 years back) and active mbed community member. I got a chance to met him at our team bbq in Cambridge just a few weeks ago and got a close up look at his new Kickstarter project!

MicroNFCBoard is an mbed-enabled board with Near Field Communication (NFC) functionality and it makes it really easy to use all three NFC modes (tag reading/write, tag emulation and Android Beam/P2P). It contains a NFC transceiver, a microcontroller and all the software you need to use NFC. The board features a NXP LPC11U34 microcontroller based on an ARM Cortex-M0 and a bunch of peripherals. 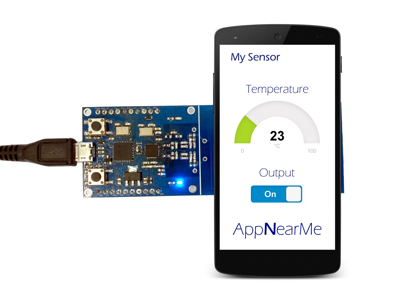 Donatien said, most people only think of NFC technology for payment applications, but in reality it has the potential for many more functionalities and applications. He saw an opportunity to create an NFC-enabled developer board that integrates a simple user interface, so that it is easier for developers to use this ultra low-power technology. To improve the use interface, he created the AppNearMe mode, so that you can view your device’s inputs and control its outputs through the NFC-enabled Android app.

The MicroNFCBoard will be supported on mbed after its official release, so lets make sure Donatien hits his funding goal. Show them your support by signing up to get your own MicroNFCBoard. They are about £40 currently, but I am sure that price range won’t last long.