If you missed Martin Smith's post in the forum about E.R.I.C the robot dog, you might just want to take a look at this:

It is an awesome project, not just because of the finished product, but because the wide range of skills showcased. These range from embedded software development and debug, to the very theoretical/mathematical pursuit of image processing algorithms, to the mechanical aspects of the design with the AX-12 servos, and of course CAD/CAM design, leading up to milling things out of aluminium! 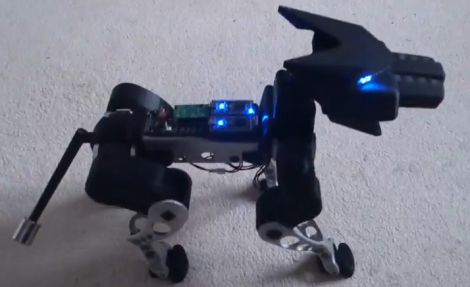 I'd spoken with Martin before a couple of years ago, so didn't feel shy about asking him to do a bit of a write-up. As he'd already kept a very detailed on-line notebook (which I spent a good deal of time reading through!) all I was really asking for was an overview.

As a part of this project Martin has also documented and published under the default MIT license a library for the AX-12 servos used by ERIC. I'd previously make a prototype version of this library, so it was nice to see it given the love and attention it deserves.

I think congratulations are in order to Martin for pulling off such an awesome project, and documenting it so thoroughly.

If anyone else has produced a project of similar quality (either as part of their studies, just for fun, or even as a prototype design in their job) and would be happy to share it in this sort of detail, please drop me a line support@mbed.org.

But now, it's over to Martins pages :