Jogging through the city center in the middle of an intense snow storm, without the risk of slipping? No problem in Holland, Michigan, where they have deployed the Snowmelt system. An ingenious system of pipes has been installed under the downtown streets, pumping hot water that is created by recycling excess heat from the local power plant. Implemented in 1988, the system is now almost 5 miles long and covers an area of 600,000 square feet (5,500 m2). At the moment, the system sends out a constant flow of water, heated to about 90 degrees Fahrenheit (32°C) - but the engineers at the Holland Board of Public Works would prefer to make informed decisions when to operate the snowmelt system. If they could get temperature information from the field (sidewalk), they could adjust pumps and valves to more efficiently operate the system to save energy. And that kind of intelligent decision-making… starts with data.

Enter Pete Hoffswell - a computer scientist working for the Board of Public Works - and his idea to use a sensor device to capture the relevant data and optimize the system. He got his hands on the mbed-based AT&T IoT starter kit and combined the starter kit - consisting of a FRDM-K64F development board, a WNC M14A2A cellular module and an AT&T sim card - with a temperature sensor and a wetness sensor to build the Snowmelt System Monitor. A small box measures both ground temperature and the ground wetness, sending its data over a cellular connection to the cloud, ready to be analyzed. The design proved so popular that it won the Realtime AT&T IoT StarterKit challenge yielding Pete a ticket to the AT&T Developer Summit in Las Vegas where he presented the system. When they heard about his success, Jan Jongboom (Developer Evangelist) and Danielle Irons (Content Specialist) reached out to have a chat with him. 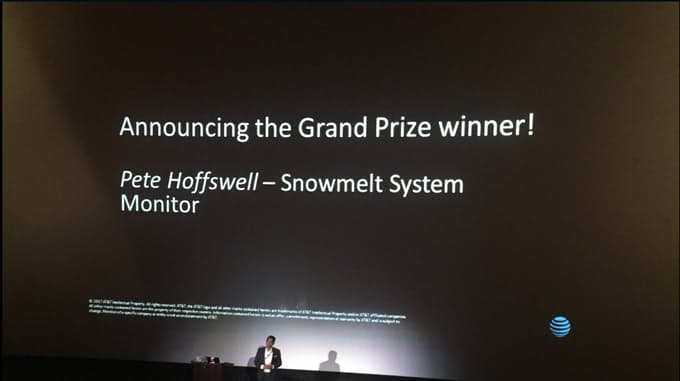 Congratulations on winning the AT&T challenge, great achievement. How did you get your hands on the development kit?

Actually through Hackster. I'm an ambassador for the website and I organize the Hackster-Holland meetup group. They launched a new program in 2016, called Hackster Live, which focuses on local events, and part of the program allows us access to hardware. AT&T gave out a number of their starter kits to participants, and one of them landed in my hands.

The kit contains a FRDM-K64F board, which is programmed through mbed. Did you use mbed before?

No, this was actually the first time. I've done microcontroller development on Arduino before, and I have a background as a computer scientist, so it was not all new. But, when I got the starter kit I decided to try mbed. And with success! The online compiler makes the process very frictionless, especially when you’re dealing with a starter kit that just came out. Every time there is an update to the libraries, they’re only one 'Update' click away. I also like mbed's public code repository. The shared code there made it easier to figure out how to add temperature sensors to the starter kit code. I just found a sensor code example and mashed them together.

Did you encounter any big problems when designing the system?

Not that many. In the end, I managed to develop both the hardware and the software in just ten days. I ran into some small issues with coverage due to antenna placement, since the system needs to be on the ground, but I worked around it. Also sometimes the cellular connection would just drop off, which caused a lot of grief during development, when you don't know whether to blame yourself or the hardware! AT&T and Avnet are still releasing updates to the software libraries, so that will hopefully be resolved. Battery life is currently not that great, lasting about a day and a half, because the power management APIs were originally not implemented, but that’s being addressed now.

So, what's next for the Snowmelt System Monitor?

We'll definitely continue our work and roll out boxes around the city. The Board of Public Works is very interested in the project, so that's great! With more data, we can run the Snowmelt system more cost effectively by adjusting the water flow and temperature depending on actual snowfall. Personally, I'd also like to experiment a bit more with the hardware. Currently we're using cellular, but we're also rolling out a LoRa network in the Holland area, built on top of The Things Network. It'd be interesting to see if we can build a next version of the Snowmelt Monitor with a LoRa radio.

Luckily we have plenty of options to build LoRa devices in mbed, so no need to change platforms. Thanks Pete, what a great project! 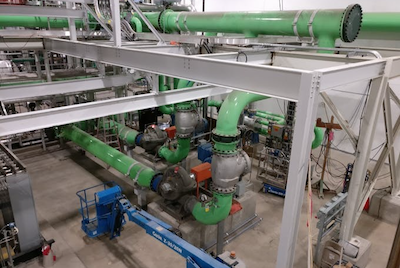 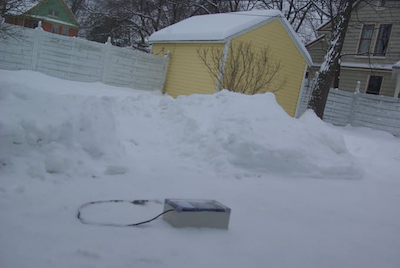 The Snowmelt circulation pumps, and the Snowmelt System Monitor. Photos via hackster.io/kayakpete.

This was the first article of 'Built with mbed'. In this series, we look at innovative IoT projects that use ARM mbed. Next month we’ll speak with Martin Bradley, who automated his home brewery using mbed Enabled boards and mbed Device Connector. Want to get featured as well? Contact us!.

Jan Jongboom is Developer Evangelist IoT and is from the other Holland. Danielle Irons is Content Specialist for mbed and her years in Sweden have given her a taste for snow.