TL;DR? Here's the link to the SimpleBLE library.

Four months ago I joined the mbed team as Developer Evangelist. A big part of my job is running around at events and talking to developers. Not only does that make for very entertaining conversations, it also gives some first hand insight into how developers are using mbed. This is especially true for new users, especially if they've never done embedded development before. There's no better way of testing the user-friendliness of your platform than by giving a workshop to novice users.

Last week's event was RISE Manchester, where we held an IoT workshop around Bluetooth Low Energy. The mbed Bluetooth library is one of the most popular libraries on mbed (and the reason I started using mbed!). But we saw that people were struggling with concepts like services, characteristics and advertisement frames - all things that you need to think about, even when you just want to broadcast a sensor value to your phone. 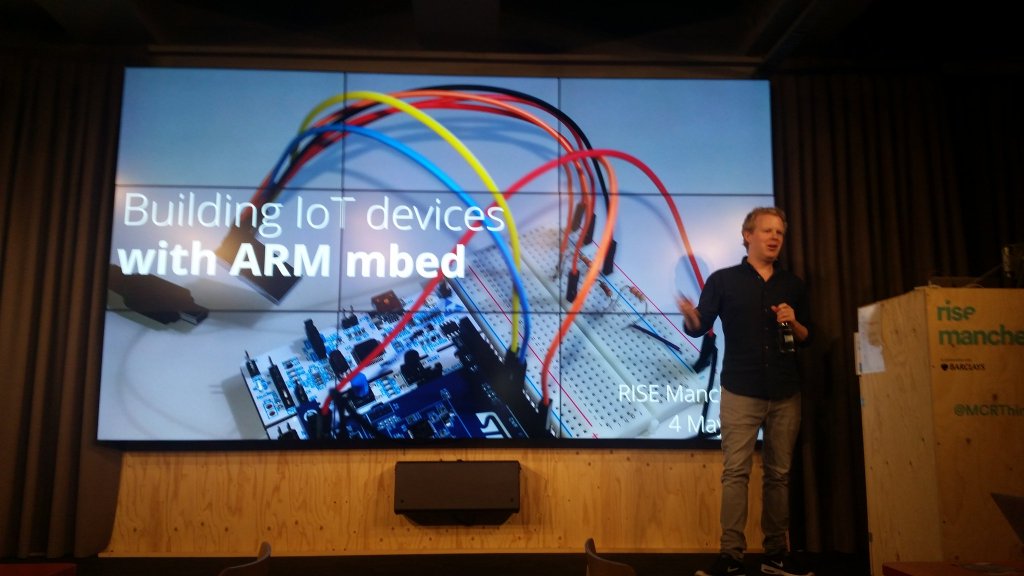 This got Jonny Austin and me thinking about a 'workshop-friendly' version of the Bluetooth API, with the following premises:

The result of that work is now published as the SimpleBLE library. Here's an example program that exposes a light sensor (on pin A0) over BLE, and lets it update every second:

SimpleBLE will now take care of declaring services, preparing advertisement frames, handling disconnects, and updating the value of the characteristic whenever you write to it. Easy peasy!

You can also read the variable, as it acts like any other variable. For example, this is how you count button presses:

Another feature that is hard to grasp in the BLE API is how to get write callbacks, as there is only a global onDataWritten callback. We fixed this by adding the possibility to provide a callback function to the SimpleBLE variable. Whenever someone writes a new value over BLE we'll call the callback function, and let you know the new value.

For example, here's how you expose an LED over BLE using SimpleBLE:

We can easily write more complicated programs, for example exposing a tri-color LED over BLE. We create one characteristic with 4 bytes (`uint32_t`) where we use the first byte as red, the second as green and the third as blue.

We currently have three types implemented, which are accessible under an instantiated `SimpleBLE` object:

Note: The access classifier only applies to BLE. Your program can always read from and write to the variable.

The following arguments can be passed to create a type:

We will probably expand this API to enable exposing pins directly over BLE, but we're happy to see what you can build with this today.

SimpleBLE is a brand-new library, but is built on top of the very well tested normal Bluetooth library. We hope that it significantly decreases the barrier for people to start programming BLE devices, especially in a time-constrained environment like a hackathon or workshop.

You can find the library here, and an example program here. If you want more information on the internals of the library, look at the mbed BLE docs. If you have feedback, please let me know!

1 answer
Can I use the bonding functions?

1 answer
The sdcard library not working with the ble nano?

1 answer
How can I add more arguments in and existing BLE program?

1 answer
[closed] Can I implement this library to modify an existing code(cyclespeedandcadence)?