This is a concept for an HDMI-CEC Interface to control an AV Receiver that does not support HDMI. CEC is the low-speed communications protocol that traverses the HDMI interface and allows unified control of devices that are plugged in (TV, DVD players, AV Receivers, and so on).

The goal of this project is to interact via the HDMI port with modern equipment (TVs, DVD players, etc). This interaction has a few specific sub-goals of its own:

This design is intended to provide a simple interface to the CEC bus on an HDMI cable. Additionally, but with less attention to the details, the circuit supports the I2C link that is also on HDMI. It makes no attempt to deal with the high speed (Video and Audio) signals on HDMI. This device is an end-point, not a pass-thru.

I'd like the interaction with the CEC-Bus to be one of several possible communication paths, so it can "bridge" different interfaces.

This design has now [20120701] been built but not yet tested. It is presented to open discussions on this topic, see what others may have already learned, and hopefully refine the concepts into a successful build. 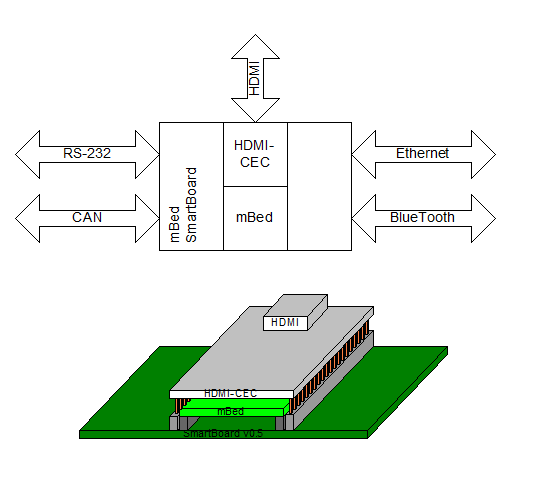 It's a pretty simple schematic, as you see here or in the downloadable PDF. 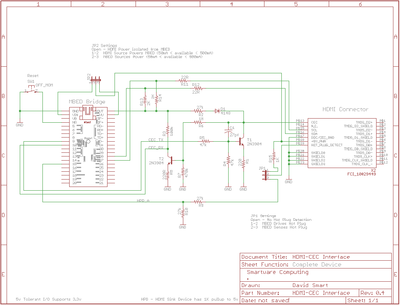 It follows the pattern from some other sites, with a few component values changed based on the analysis I did using LTC Spice.

In analyzing the waveforms from the LT Spice analysis, you can see good signals in all cases. Another pair of eyes would be helpful, but this appears to satisfy the electrical requirements of CEC communications.

An earlier version of this was single sided, and could have been produced in the home lab, but this version opted for a few more features and a ground plane to help manage EMI. With this change, it became a double-sided PCB. 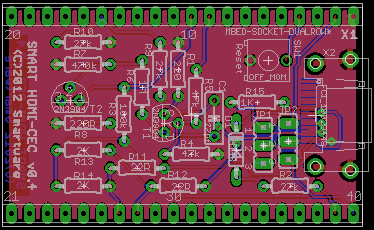 Aside from the rather fine-pitch HDMI interface (which may present some challenges), all other parts are intentionally thru-hole to make assembly in your home lab easier. Care must be taken to solder the HDMI connector first, and the remaining in whatever order makes it convenient. There are further suggestions below.

The PCB layout is intended to "bridge" over top of an mbed, which is itself plugged into one of the many baseboards (e.g. SmartBoard Baseboard or others) that provide two rows of pins.

1 Jun 2012: Parts are on order, but I have not yet built this design. So, while every attempt has been made to produce a working design and an accurate BOM, please review the information carefully.

28 Jun 2012: The PCBs arrived. Here's my progression of the build. Since it is a pretty simple circuit, hopefully not much will go wrong (except as you see in the first step).

Now that it is built, I first plugged it into a breakboard, so I could perform just a few basic checks that it is working correctly. 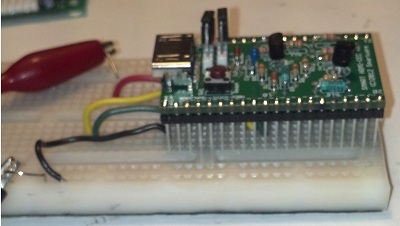 Some of the same pins that the HDMI-CEC interface uses to communicate with the mbed are also used by peripherals on the SmartBoard, so a few of the shunt / jumpers must be removed. See the following table to see which to remove.

Then, it is ready to install as a bridge over the mbed on the SmartBoard.

Changes for the Future Version

For this, I have just about nothing so far - aside from research and a few concepts. Here, perhaps, this community can provide the greatest benefit. And the mbed site will soon (as of mid-June 2012) have collaboration capability.

What I do have:

Comments and Feedback are Encouraged

If you've thought about this, done anything about it, or thinking of doing something, I'd like to hear from you. Please comment on this page.

This is a concept for a simple CEC interface using the mbed. CEC is the low speed communications protocol carried on HDMI cables, and could let you monitor and control TVs, DVD players, AV Receivers, and other HDMI interfaced equipment.