A lot of mbed libraries rely on I/O transactions of some kind. Whether it's a toggling pin, an I2C, SPI or Serial transfer, or even something else, these transactions have one thing in common: they tend to take time. Since the bus speed is commonly much lower then the frequency at which the core operates, these libraries tend to introduce a lot of while(transmitting)-like code. Since this just burns CPU cycles without doing anything useful, it's not a recommended design practice, but up until recently mbed had no support for doing something else.

Enter the asynchronous APIs. They allow you to set up a transfer, send it to the peripheral for execution, and get a callback when the transfer is finished. This way, you can do something else, such as more number crunching, or even go to sleep using the improved sleep API. Going to sleep while waiting for an I/O transaction to finish can save you a lot of power, as demonstrated in this article: Reducing Power Consumption with the ARM mbed Low Power APIs and EFM32 MCUs 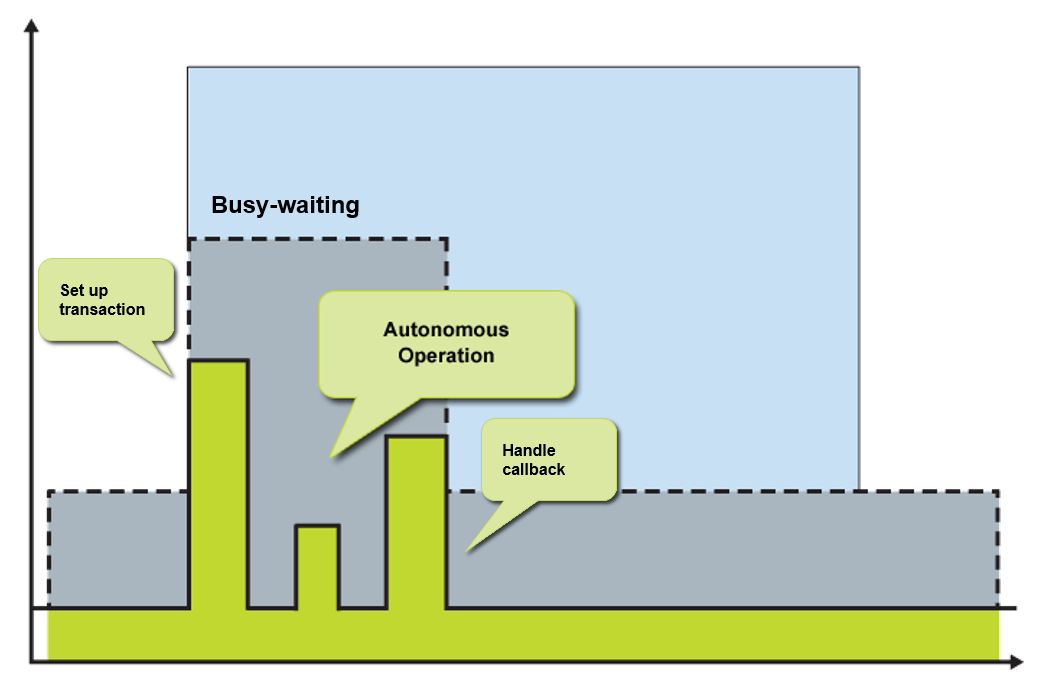 The first thing you realize is different about asynchronous calls is that they can optionally tell your program that the transfer has completed (or something bad has happened). This is called a callback, and happens through executing a function you define with some status flags. Beware though, this can happen anytime, so you should make sure your code is robust enough to handle that!

In order to deal with this callback system in C++, mbed introduced a new object type called 'event_callback_t'. It declares a FunctionPointer object, and initializes it so it can point to a function taking an int as argument, and returning void. The benefit of doing it this way, instead of passing around regular C-like function pointers, is that you can also have member functions as a callback. This is particularly handy when you have multiple instances of an object doing I/O!

Setting up an event_callback_t object

From a back-end perspective, calling the call(arg) method on the event_callback_t object, will call the attached function with the passed argument.

Now that we know how to set up a callback mechanism, let's look at how the different communication peripherals now do asynchronous operations.

Until now, SPI really only consisted of one function, write, which would write the configured amount of bits to the bus, and return the response. With the asynchronous API, we are introducing the ‘transfer’ function, much like the I2C equivalent. The difference here is that if the amount of bytes to receive is greater then the amount of writes, the transaction will automatically write fill words to receive the given number of bytes. The other way around also works, the transaction will only fill the receive buffer with the specified amount of data, even if the write buffer is larger.

The transfer function also takes an event argument, which is the logical OR of all events you want to get a callback for (defined in spi_api.h), and a pointer to an event_callback_t for your callback handler.

You can see the new APIs being used in Silicon Labs’ mbed library for the Sharp LS013B7DH03 memory LCD.

Display driver for Sharp's range of SPI-driven memory LCD's, leveraging the power of asynchronous transfers. Currently supports LS013B7DH03, but easily extendable to other models as well.

The serial bus is the odd one out of the three. Because it is asynchronous by nature, the functions had to be split up in two: one for sending, and one for receiving data.

Likewise, the receive function, called ‘read’, takes a buffer, its length, a collection of event flags, and a pointer to the relevant event_callback_t object. However, it can also take a fifth argument, which is a character to listen for. If the SERIAL_EVENT_RX_CHARACTER_MATCH flag is enabled, reception will cease upon seeing this character, and the callback will get called with this flag.

You can see the new API in action in Silicon Labs’ low power serial demo program.

A code sample showing the use of the asynchronous Serial APIs.

For I2C, the traditional start, stop, read and write functions have been superseded by a single ‘transfer’ function. It takes both a write (tx) and read (rx) length in bytes, and char pointers to the respective write and read buffers. It will automatically add start and stop conditions before and after the transaction, and if both write and read lengths are greater then zero, a restart condition will be generated between the write and the read. Additionally, it takes an event argument, which is the logical OR of all events you want to get a callback for (defined in i2c_api.h), and a pointer to an event_callback_t for your callback handler.

You can see the new APIs being used in a real-world scenario in Silicon Labs’ mbed library for the si70xx series of relative temperature and humidity sensors.

This is a library to read out sensor values from Silicon Labs' si70xx-range of relative humidity and temperature sensors.

The API to Ticker, Timer and Timeout functionality did not change. However, since they are also asynchronous in nature, they are included here for reference. Please note that starting with mbed release 99, on supported platforms, there are also Low Power versions of these APIs. The time resolution for these is quite granular (on Silicon Labs about a quarter millisecond), but they are much more power friendly.

The one thing that sets their API apart from the transactional model of Serial/SPI/I2C, is that the callbacks you get from a time-based event have no event flags. Therefore, they do not use the event_callback_t model. Instead, the API has an attach() method that allows you to attach either a static or member function by passing the relevant pointer(s). The callback function signature has to be of the type void functionName(void);

Using a timeout with a member function as callback