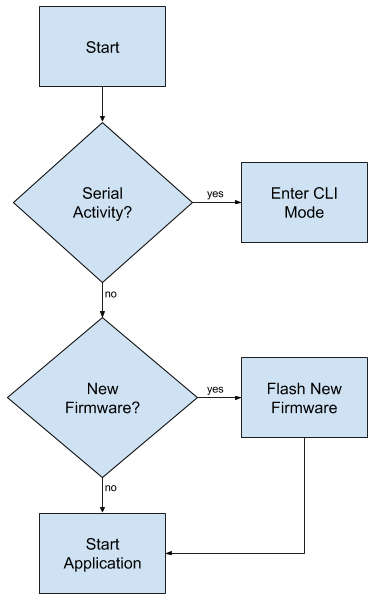 This feature has been tested with minicom 2.7 with lrzsz 0.12.21rc on Ubuntu 14.04 and Tera Term 4.71/SVN#4604 on Windows 7. Using other terminal emulators or even different versions of minicom or Tera Term than the ones listed above may cause the YMODEM file transfer to fail. Please use the versions listed above for best results.

To enter CLI mode, connect a terminal emulator to the USB debug port at 115200 8N1 with flow control disabled. Hold down any key on your keyboard and reset the mDot or Dragonfly. You should see the following prompt appear:

The bootloader CLI supports a number of commands. Typing "help" on the command line will result in a list of available commands and descriptions being printed.

Follow the following steps to upgrade the firmware on a mDot or Dragonfly using the MTS bootloader CLI and YMODEM.

The bootloader logs out the debug port while it is upgrading the application.

After the upgrade process is complete, the bootloader will automatically reset the system which will start executing the new application.

Updating firmware on a mDot or Dragonfly from the application involves 3 major steps:

Move New Firmware Into the Filesystem

It is the responsibility of the application to get the new firmware into the filesystem. This can be done using the SPI flash driver and the spiffs filesystem driver on the Dragonfly. An example program demonstrating how to use the filesystem can be found here. The new firmware must be saved with the name "fw_upgrade.bin" in order for the bootloader to detect it.

On the mDot, the filesystem API in libmDot should be used. The function moveUserFileToFirmwareUpgrade() should be used to properly rename the file so it will be detected by the bootloader.

After reset, the bootloader will execute and detect the new firmware. It goes through the following steps in the upgrade process:

The bootloader logs out the debug port while it is upgrading the application.

If programming the new firmware fails, the bootloader will attempt to restore the old firmware to prevent bricking the device.