Firmware Over the Air FOTA Updates

We've got over-the-air firmware updates (FOTA) working for the platforms based on Nordic's nRF51822. This means that it is possible to update the firmware of an nRF51822 based device from a BLE-enabled smartphone (and hopefully soon from a development PC over a BLE dongle).

Presently, there is very little security or safety in this firmware-update process, but this is being worked upon.

We're also working on standardization of the FOTA protocol; and for defining a security model for validating/authenticating firmwares.

FOTA requires the use of a (Nordic-specific) DFU-bootloader to provide the functionality for firmware download and reprogramming. Once the DFU-bootloader is resident, any BLE application may be updated as long as the operation of the BLE stack isn't impaired. https://devzone.nordicsemi.com/documentation/nrf51/6.0.0/s110/html/a00062.html covers some more technical detail compared to what's written here.

The following image shows the layout of the main software components which go into a FOTA capable system. These include: 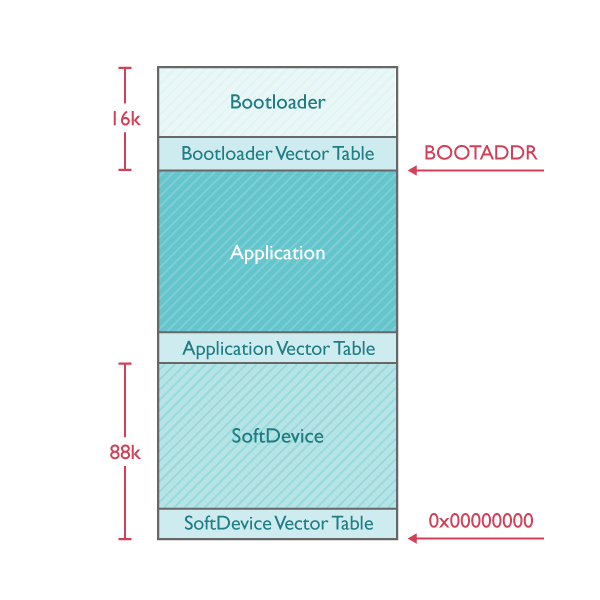 The bootloader image needs to be installed initially; and thereafter the FOTA mechanism can update any DFU-service enabled application as long as it doesn't crash. The softdevice and the bootloader components don't change during FOTA updates; and therefore don't need to be combined with the firmware sent over the air.

We'd like to re-emphasize that FOTA applications don't need to be combined with the softdevice (as is needed for stand-alone applications used with CMSIS-DAP). For this reason, FOTA applications need a separate (virtual) build target for each Nordic platform. be generated by building for 'shadow' platforms meant for FOTA.

Here are some links to these alternate/virtual platforms:

Please be sure to add these platforms to your online compiler; and build for them when generating FOTA binaries.

Here's an initial image for the Nordic mKit to install the bootloader.

Here's the corresponding initial image for the nRF-DK platform.

Please unpack the appropriate .zip archive into a .hex file for programmed onto the target.

Together with the bootloader, these images come with a default application offering Device-Information and Console Output services.

You can find more information about the internals of the DFU bootloader at: http://developer.mbed.org/forum/team-63-Bluetooth-Low-Energy- community/topic/5201/.

FOTA enabled applications work by offering a DFUService. This service contains a 'control' characteristic which when written to forwards program control to the resident bootloader in preparation for FOTA. This division of responsibility implies that FOTA applications need bear only a small overhead while keeping most of the FOTA heavy-lifting in the bootloader.

When building for a FOTA-enabled platform (see discussion on virtual/shadow platforms above), an instance of the DFUService gets added to an application implicitly during the call to ble.init(); the assumption being that for such a platform an application will always want to enable FOTA.

If an application built for a non-FOTA platform wishes to introduce the DFUService explicitly, it takes a single line of code to do so:

In that case you will also need to include DFUService.h. An example of such use would be the creation of the initial application which goes with the bootloader.

Sequence Diagram for Firmware Over The Air¶ 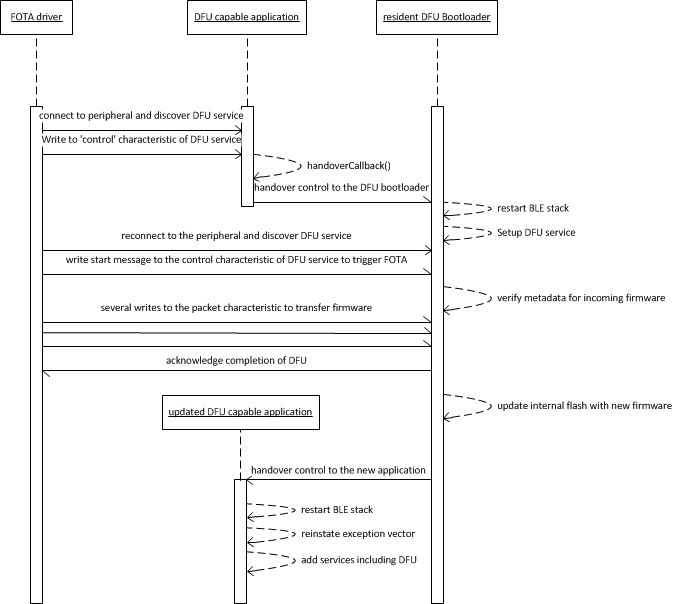 This process can currently be driven from an external BLE agent such as an Android phone. We'll soon be releasing our own reference apps for iOS and Android; together with SDKs to build custom apps for FOTA. For the moment, we recommend using Nordic's nRF Master Control Panel as a generic tool to drive FOTA. https://play.google.com/store/apps/details?id=no.nordicsemi.android.mcp

Here's a video showing FOTA (starting at around 2:00).

The following sections provide snapshots of the process as driven by the Master Control Panel.

Lising the device with DFU Service¶

The following images (taken using Nordic's master-control-panel Android-app) expand on the capabilities of the defaultApp bundled into the initial bootloader image (mentioned above). Among other services, this application offers a DFU-Service which allows FOTA. All DFU-capable applications should offer this service.

The following set of images shows how Nordic's Master Control Panel can be used to cause a DFU capable application to forward control to the bootloader:

And these images show the main FOTA sequence using the bootloader:

At the end of this process, the new application is handed control automatically, and you can see it appear on the master-control-panel.

You should be aware that to save energy a GATT client often caches the results from a service discovery. Changing/updating an application (especially when replacing it with a different application) may require the client to re- attempt service discovery. After a FOTA update, you may want to restart your client application, if this doesn't happen automatically; or restart the Bluetooth service on the client's system.