The MultiConnect® Dragonfly offers developers an FCC and carrier certified solution that makes connecting sensors and other edge-of-network devices quick and easy.

The MultiConnect® Dragonfly™ cellular SoMs are complete, ready-to-integrate processing and communications devices that offer developers the functionality of a SoM with the convenience of an onboard cellular radio all in one compact design. With its integrated Cortex M4 processor, developers can host their application and have access to a full suite of interfaces for connecting sensors or other remote assets.

Dragonfly also comes with an ARM mbed compatible software library for even faster development. This powerful suite of hardware and software products greatly reduces your time to market and makes your Internet of Things (IoT) device a reality today.

It is possible to develop offline for the Dragonfly using mbed-cli and the Eclipse IDE. See our wiki page for more information.

To program and use the Dragonfly, you will need a UDK2 Developer Kit. 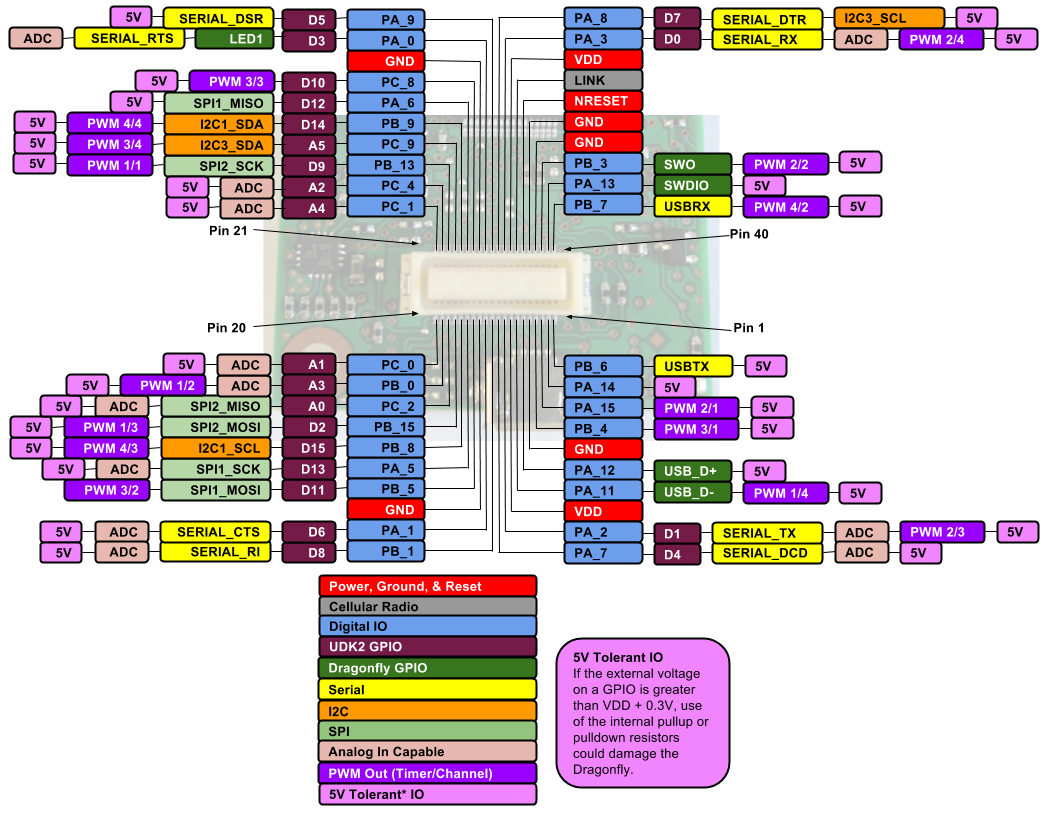 This code is for the Dragonfly(MTQ) not the Dragonfly Nano(MTQN). It has been tested and developed against mbed-os version 5.4.7. Later versions of mbed-os may not be compatible.

The MTSCellularInterface library implements the mbed-os CellularInterface for the cellular radios on MultiTech Dragonfly devices. MTSCellularInterface provides TCP and UDP sockets, SMS messaging capabilities, and GPS location*. After cloning this repository, run the setup script (setup.sh or setup.bat) to generate the version header and clone required dependencies. The library can be cloned from GitHub.

* Not all radios support GPS. GPS location requires a lock on GPS satellites, which may not be possible indoors.

Import our example programs to get up and running quickly and easily, then modify them to create your own solution using the Dragonfly!

Most radios require an APN string to be set before the radio can be used. The APN can be set in the source of the specific example you're using. The SMS example also needs a phone number to send/receive SMS messages to/from.

Example programs for MultiTech Dragonfly devices demonstrating how to use the MultiTech MTSCellularInterface library for cellular radio communication and control.

This old cellular stack is not compatible with mbed-os. Consider using MTSCellularInterface instead!

These old example programs use the deprecated MTSAS library which is not compatible with mbed-os. Consider using Dragonfly-Examples and MTSCellularInterface instead!

Ping a server using the onboard cellular radio.

Send and receive SMS messages using the onboard cellular radio.

Does HTTP GET and POST requests using the onboard cellular radio.

Does HTTPS GET and POST requests using the onboard cellular radio.

The Dragonfly ships from the factory pre-loaded with AT Passthrough Firmware. This firmware implements serial passthrough and provides direct access to the cellular radio via the external serial port on the UDK2. It is available here.

It is possible to compile for the Dragonfly and debug them on the Dragonfly using the Eclipse IDE. See our wiki page for more information.

You can also point elsewhere to include some other bootloader

The Dragonfly includes a bootloader which allows applications to be upgraded OTA (Over The Air) or via serial without the need for a developer board. See the wiki page describing how the bootloader can be used for more information.

The DK boards for the Dragonfly require the ST-Link driver to be installed before the debug serial port can be used on Windows PCs. This driver is different from the mbed Windows serial driver.

In its current state, the program will blink the D3 LED on a UDK2 board.

1 answer
Can not get GPS Fix

0 answers
Is it possible to use GPS and Cellular Data simultaneously?

2 answers
Is it possible to use an external IP stack with Dragonfly using PPP ?

2 answers
Do this board has any mbed client example

To compile a program for this board using Mbed CLI, use MTS_DRAGONFLY_F411RE as the target name.