The mbed includes a very broad range of integrated peripherals:

However, in some cases you need to hook up devices that require a parallel 'bus' connection. This often includes a databus (8 bit), an addressbus (several bits) and some controlsignals like RD*, WR*, Reset and Chip Select. An example of such a device is a (legacy) LCD controller or a UART. Rather than use up the limited set of mbed portpins and loose all the available special functions that are provided on these pins, it may be possible in some cases to use a so-called port expander. A good example of a port expander for I2C is the PCF8574. Multiple PCF8574 devices can be connected by using the mbed I2C bus (SDA and SCL).

Given the fact that in many cases some protective buffering of mbed is preferred anyhow, the combination of the I2C bus and a number of low-cost I2C port expanders has other advantages too:

The I2C bus is well supported by the mbed libraries. The disadvantage of the approach using the I2C serial bus (typically 100Kbit/s, max 400Kbit/s) over a fully parallel bus is a slower update rate. However, that should not be a problem in many cases which need only a relatively low rate of data exchange (e.g. keyboard entries and displayresponses). The update rate issue has been further reduced by directly using a small number of peripheral pins for the controlbus (Read, Write etc). These signals are protected and level converted from mbed 3V3 to 5V TTL by a separate buffer device (SN74HCT244). The TTL levels may be input to mbed without adjustment to 3V3 since all LPC1768 inputs are 5V tolerant.

The blockdiagram is shown below. 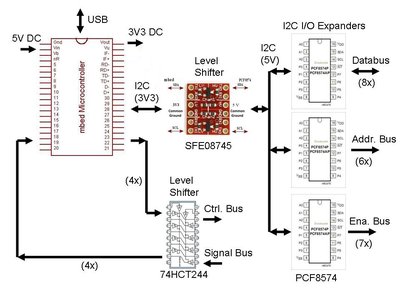 In this setup we have

The controlbus inputs may be used for Interrups, busy signals etc. Level translation for I2C is provided by a Sparkfun module SFE08745.

A typical Write interaction between mbed and a display device on the bus is as follows:

This results in the following WR sequence on the mbed bus: 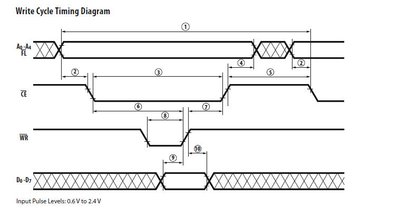 Software has been developed to allow easy use of the parallel bus. For example:

In your own application you can develop a Class for each specific slave device and include modified versions of the 'read' and 'write' functions as 'private' member functions. This allows you to hardcode the device CS_pin signals, define specific delays when needed, change the sequence of CS, WR etc or mask out certain address or databits when they are not used in a particular case.

The libraries and example code can be found here [http://mbed.org/users/wim/programs/mbed_bus/lwtorn].

An example of how you may use this parallel bus to control a smart alphanumeric display can be found here http://mbed.org/users/wim/notebook/smart-alphanumeric-displays/

The mbed and the bus expander hardware is shown in the picture below. Note the 3 PCF8574 devices on the right hand side next to the flatcable connector. 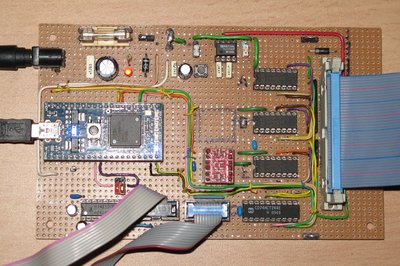 In some cases you need to hook up devices that require a parallel 'bus' (eg databus, addressbus and controlsignals). Rather than use up all many mbed portpins it may be possible to use a so-called port expander instead.