Users » Strikewolf » Notebook » Robotics for Cat and Mouse with mbed

Robotics for Cat and Mouse with mbed

Spring 2014, ECE 4180 project, Georgia Institute of Technolgoy. This is the human driver (RF controller) program for the Robotics Cat and Mouse program.

Spring 2014, ECE 4180 project, Georgia Institute of Technolgoy. This is the autonomous driver program for the Robotics Cat and Mouse program. 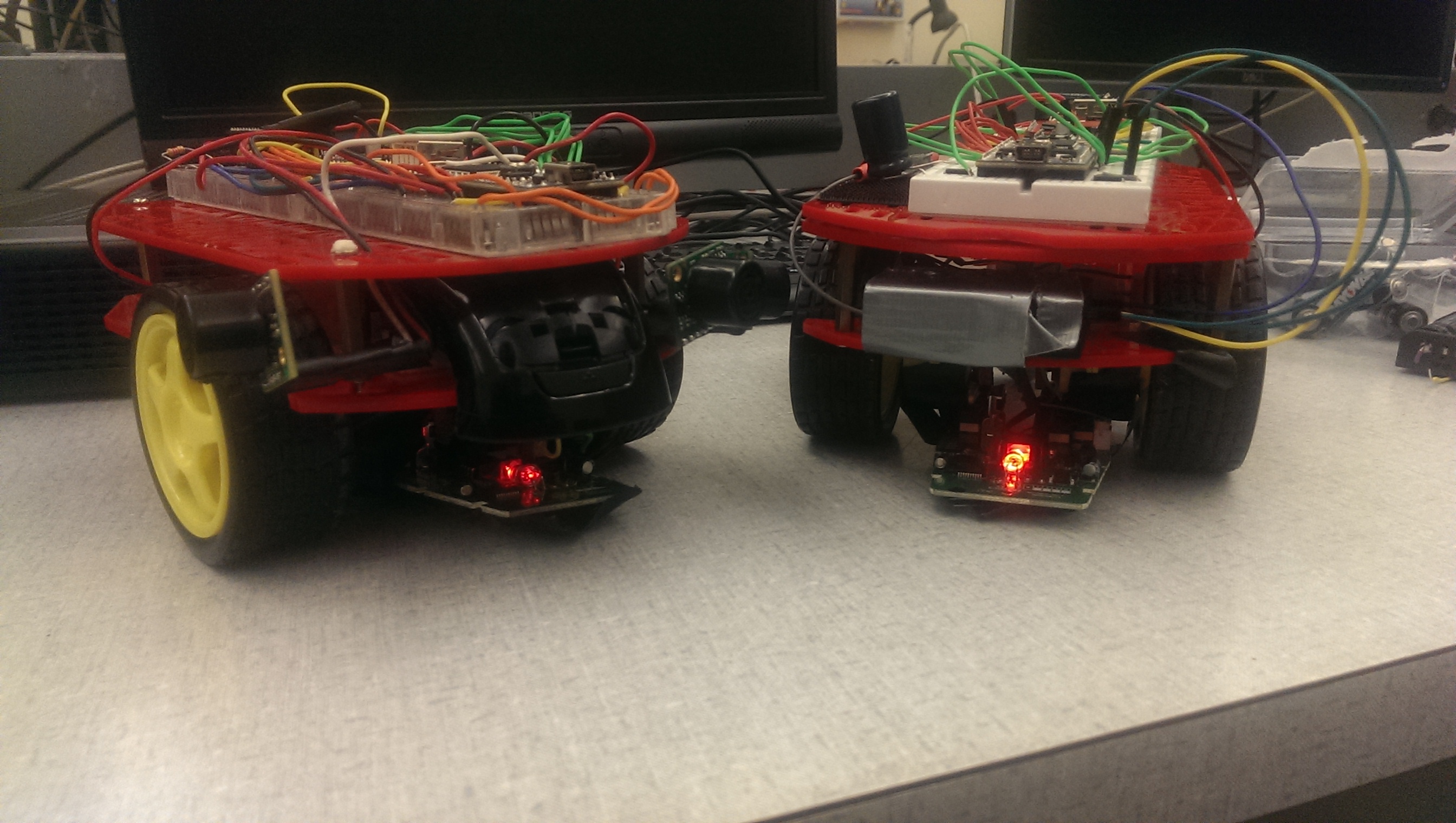 The objective of this project is to implement a robotic version of "Cat and mouse." The "Cat and Mouse" construct has one player chase the other until tagged. For this project, there will be two robotic cars utilizing the mbed lpc1768: a user car, and autonomous car. The user car will be controlled by a human via an RF remote control, while the second car will be completely autonomous. The implemented version explained below has the user car chase the autonomous car, until the user is close enough to the autonomous car to register a "tag." The following hardware was required:

Hardware Common to Both Cars

Note, USB cables are attached for power only (the car's batteries were beginning to die).

Devices Common to Both Cars

The accelerometer and gyroscope is an IMU combo-board which uses I2C. This combo board gives us 6 degrees of freedom and allows us to use intensive IMU filtering with the IMUFilter mbed library from the mbed cookbook. The products from the filter, specifically the getYaw(), produce a stable orientation value relative to 0, ranging from 0 to +179 and 0 to -179. The orientation is necessary in order to assist calculations with the xy positioning from the optical sensor as well as calibrating the motors to drive in a relative straight path.

This is a video of the magician autonomous car driving straight with the assistance of the accelerometer/gyroscope and its IMU filtering.

It is important to note that before deferring to the accelerometer/gyroscope, both a compass and the optical sensor were used individually. However, due to too much electromagnetic interference and instability while the car was moving resulted in the compass being dis-guarded. For the optical sensor alone, dozens of custom filters ranging from low-pass and high-pass filtering and average filtering were tried to reduce the static values at idle and account for the overall accumulative error. It was found that the optical mouse sensor we used was terribly overprecise, where the number of samples and sample values were too inconsistent in order to use regression analysis to obtain orientation based on it's x and y outputs. In the end, the accelerometer and gyroscope with the IMU filtering proved to be the most stable, reliable and consistent tool in order to determine the orientation of the robot. Below is the wiring for the IMU combo board.

The USB breakout was necessary to interface with the optical sensor from a wireless mouse. The IC surface mounted chip was removed from the wireless mouse casing, along with's its 2 AA battery power supply. The 2 AA power supply used a two pin molex connector to supply the optical sensor with power, while the wireless dongle was attached to the usb breakout connector. In software, we used the USBHostMouse library within the human interface devices (HID) to obtain code that will generate an interrupt with the status of each button and the x/y position change of the mouse every time an event occurs. 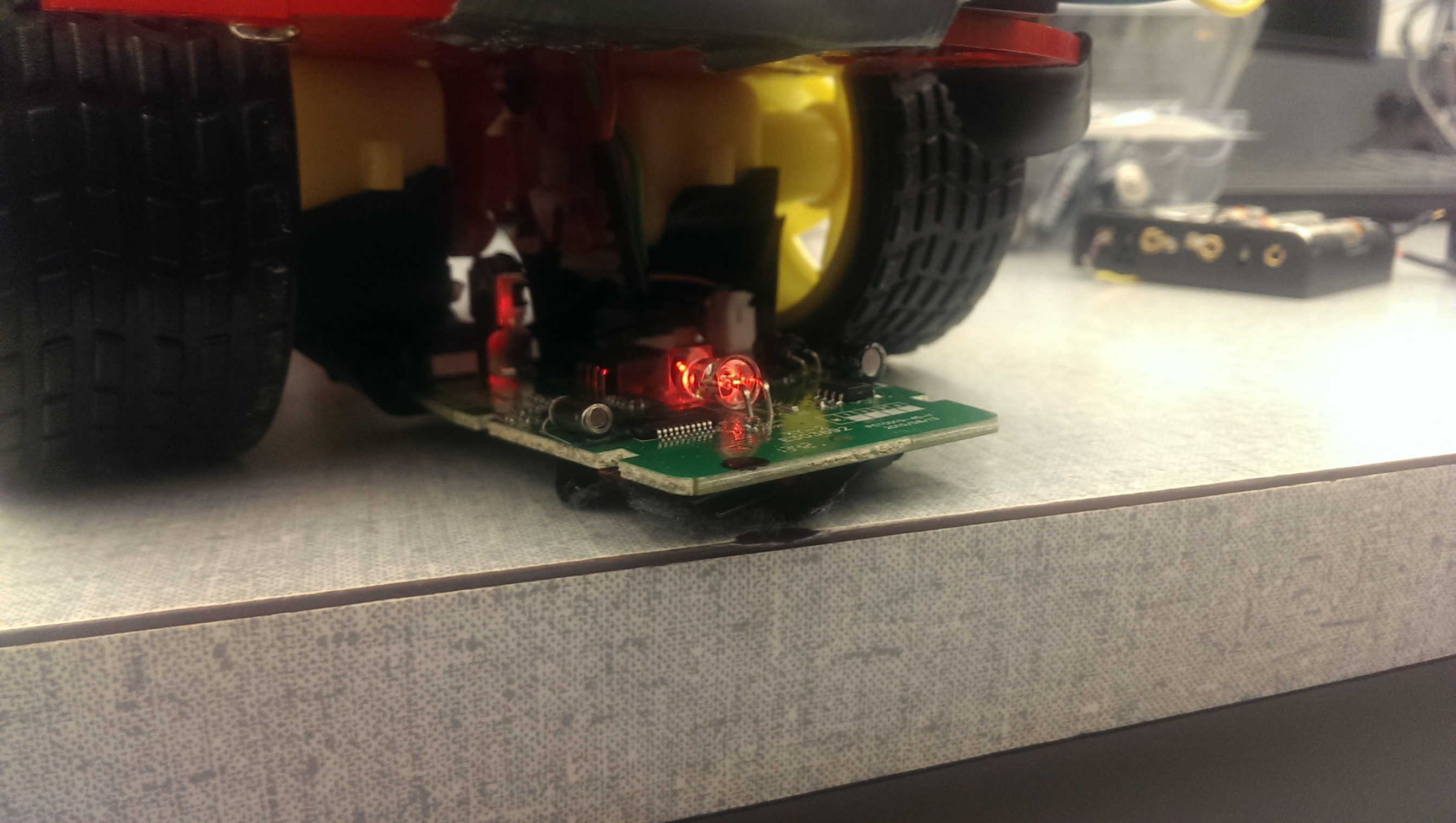 The mouse's original intention was to calculate the car's x and y coordinate positions. To reduce error, the same model mouse was mounted on each car. As stated in the Accelerometer/Gyroscope section, the optical mouse was proven to be a insufficient device to solely determine the car's orientation. However, the the accleremotoer/gyroscope's orientation, simple trigonometry allowed the delta y of the USBHostMouse interrupts to determine the cumulative x and y position. Below is the wiring for the USB breakout, and also the interrupt code to generate the cumulative x and y position.

For the autonomous car to send the game over signal back to the user car, it really can write anything to the buffer. For this project, we write the ascii code for 'd' to the buffer 500 times as a sanity check to make sure the byte is received successfully.

Below is the wiring for the xbee as well as the send and receive code to implement this protocol.

Example demo using the Xbees with our custom protocol.

Sending an XY coordinate via XBee

Receiving an XY coordinate via XBee

The External Power supply is required in order to drive the Magician Chassis's two DC motors. This is because the mbed's 5V VU USB Out can safely handle only 4mA. The motors require at least 7mA to function correctly. For this project, 4 AA batteries at 1.4V each wired in series were used as the external power supply. Below is the wiring for the external power supply:

The dual-H-Bridge is used to take in the external power supply and feed the two DC motors on the magician Chassis. Below is it's wiring. 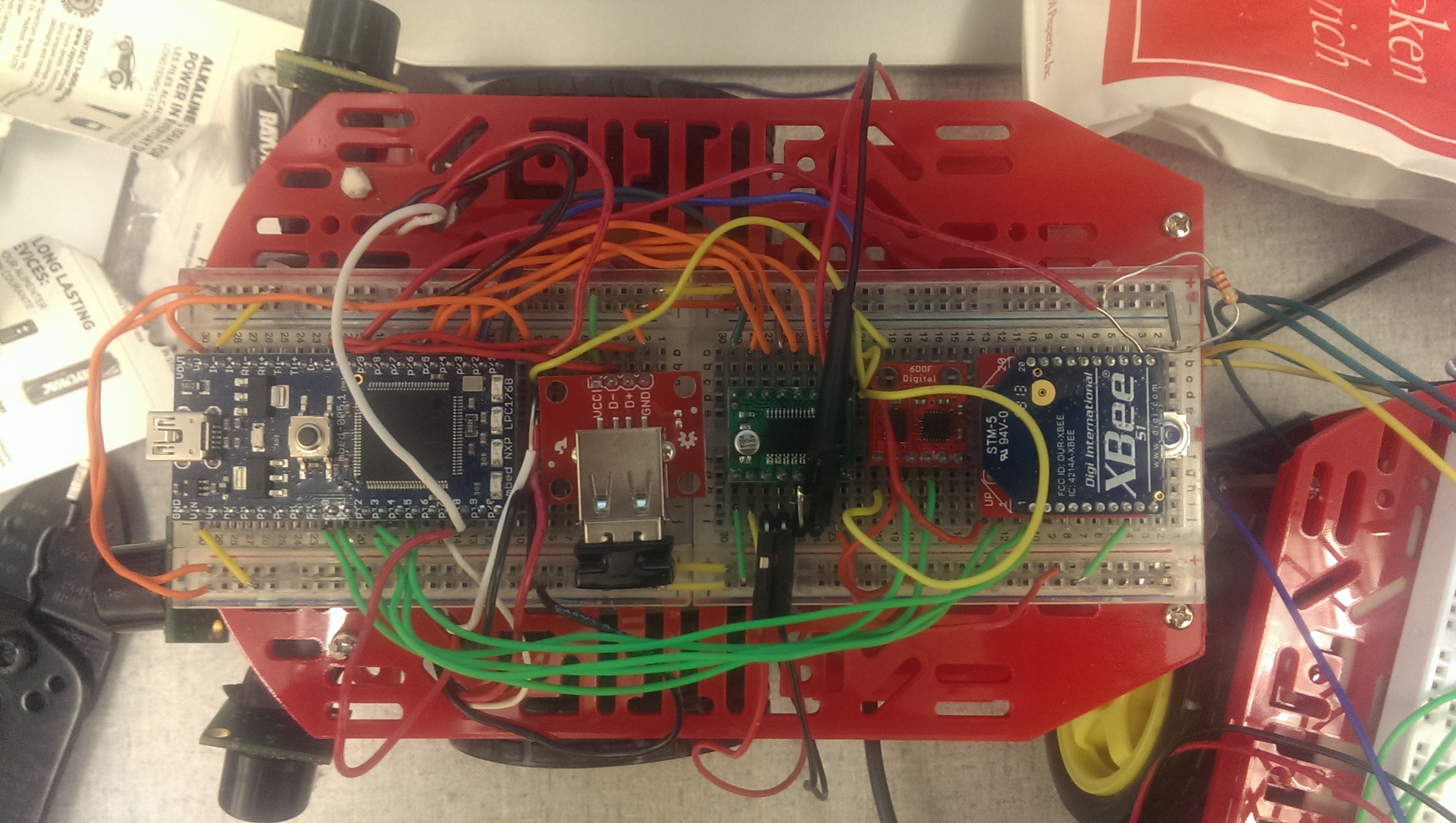 The user car is directly controlled by the human. To accomplish this a 2.4 GHz radio receiver was used in conjunction with an RC flight controller. The RF receiver has independent PWM outputs for each control axis on the RC controller (Right stick X and Y). The mbed uses a captive waiting loop in conjunction with a timer to implement PWM reads, and acquire the stick value on the controller. This is then passed to a control algorithm which drives the motors according to user input.

Example demo of the user car being controlled by the RF remote controller and receiver. 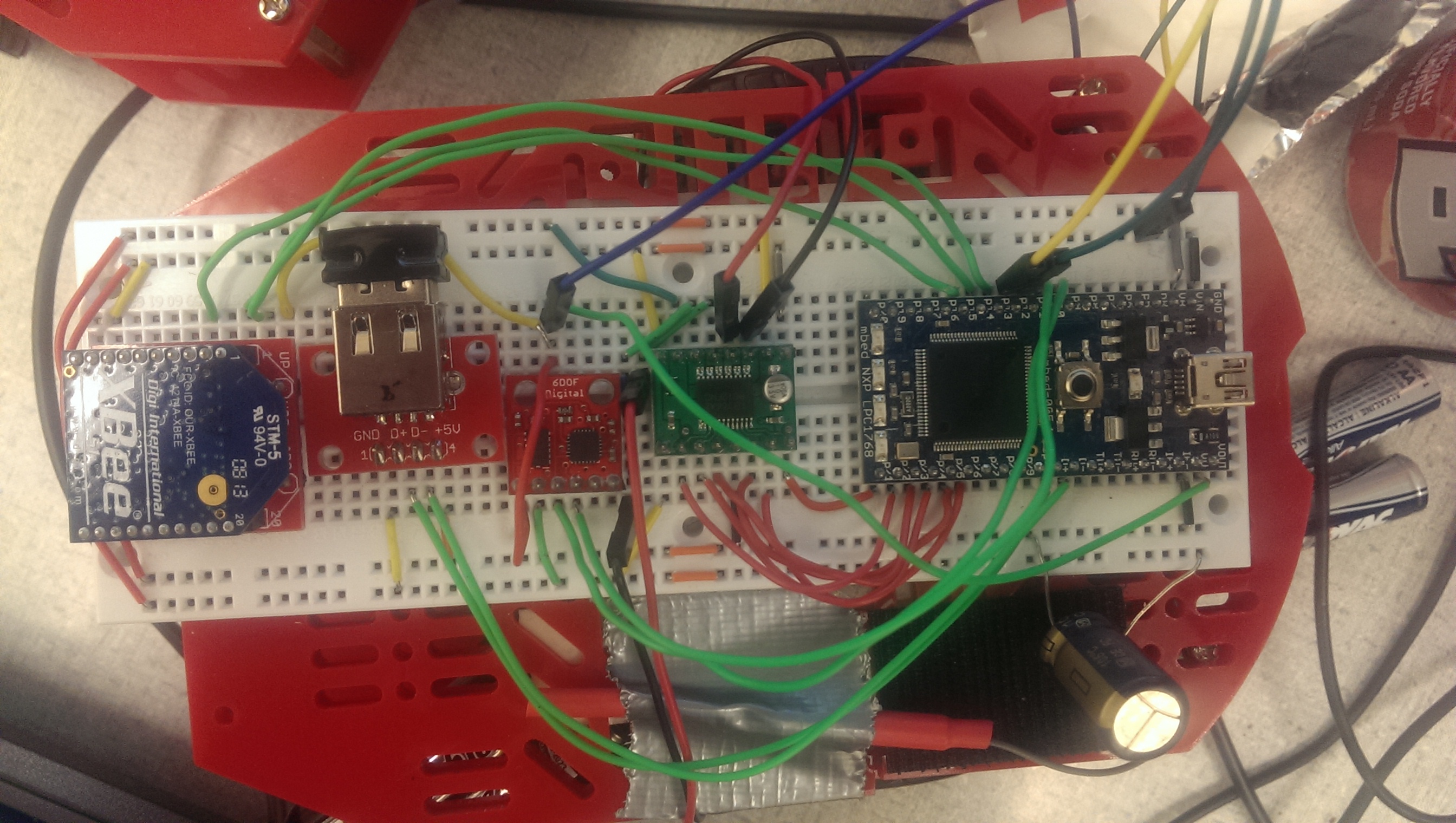 In order to implement collision detection for the autonomous car, three sonar sensors were attached to the front of the Magician Chassis. Each sensor was scaled to provide a value in the range of 0 to 10 where any read value less than 1.8 (approximately 6 inches) is considered an obstacle. The collision detection system will first check for an obstacle in the front center. If detected, it will determine whether the left or right center has more distance. Based on the sensor with the lesser distance, the car will turn itself towards that direction until the sensor on the opposite side shows no obstacles.

Below is the pin configuration for the sonar sensors.

Example of the sonar sensors driving the collision detection system.

1 comment on Robotics for Cat and Mouse with mbed:

Robotics for Cat and Mouse with mbed