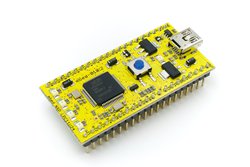 This board is no longer available; this information is provided as a reference for existing users. The mbed1768 mbed-LPC1768 and L-TEK-FF-LPC546XX boards provide alternatives in the same form factor, while the LPCXpresso11U68 and FRDM-KL25Z provide more capable Cortex M0+ platforms from NXP.

The mbed Microcontrollers are a series of ARM microcontroller development boards designed for rapid prototyping.

The mbed NXP LPC11U24 Microcontroller in particular is designed for prototyping low cost USB devices, battery powered applications and 32-bit ARM® Cortex™-M0 based designs. It is packaged as a small DIP form-factor for prototyping with through-hole PCBs, stripboard and breadboard, and includes a built-in USB FLASH programmer. 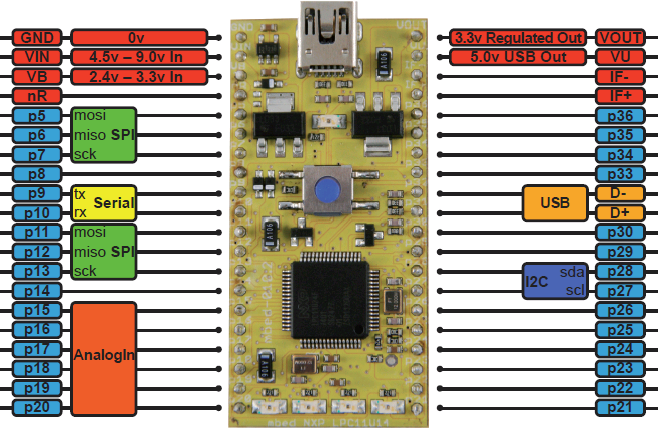 It is based on the NXP LPC11U24, with a 32-bit ARM Cortex-M0 core running at 48MHz. It includes 32KB FLASH, 8KB RAM and lots of interfaces including USB Device, SPI, I2C, ADC, and other I/O interfaces. The pinout above shows the commonly used interfaces and their locations. Note that all the numbered pins (p5-p30) can also be used as DigitalIn and DigitalOut interfaces.

The mbed Microcontrollers provide experienced embedded developers a powerful and productive platform for building proof-of-concepts. For developers new to 32-bit microcontrollers, mbed provides an accessible prototyping solution to get projects built with the backing of libraries, resources and support shared in the mbed community.

The mbed NXP LPC11U24 is one of a range of mbed Microcontrollers packaged as a small 40-pin DIP, 0.1-inch pitch form-factor making it convenient for prototyping with solderless breadboard, stripboard, and through-hole PCBs. It includes a built-in USB programming interface that is as simple as using a USB Flash Drive. Plug it in, drop on an ARM program binary, and its up and running!

Make sure you have updated your firmware to the latest revision.

1 answer
how many files can I make and store in local file?

To compile a program for this board using Mbed CLI, use lpc11u24 as the target name.