The mbed microcontroller is capable of connecting to the internet, and functioning as client or server for a variety of protocols. To achieve this, the LwIP TCP/IP stack has been ported to mbed.

On the RJ45 page you will find wiring diagrams for popular RJ45 sockets. You can skip this step if you have a baseboard with RJ45 socket (see list of baseboards on the cookbook homepage).

On the Ethernet Interface page you will find everything you need to set an IP address, and bring up the stack.

Afterwards, you should hopefully have TCP/IP up and running over Ethernet.

Where to look next: 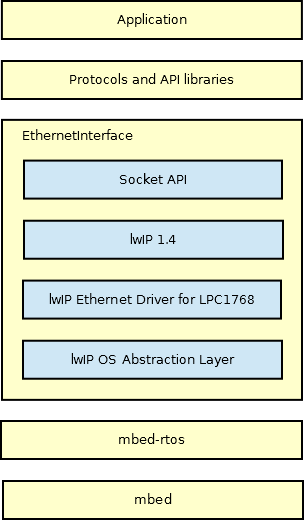 Let's analyse the above layers from top down:

If you have questions on the usage of this stack, the best place to ask is in the Forum.