The LPC4088 QuickStart Board contains a number of on-board peripherals which doesn't have a corresponding driver implementation in the mbed SDK. Embedded Artists has developed a separate library with drivers for those peripherals as well as other related components.

A library with drivers for different peripherals on the LPC4088 QuickStart Board or related add-on boards.

Example showing how to create a file system on the QSPI flash.

The mbed official USB device library has been ported to the LPC4088 QuickStart Board. There are several USB device class implementations available. Please visit the USB device page in the handbook for more details.

The micro-B connector used for USB device is shown in the picture below. 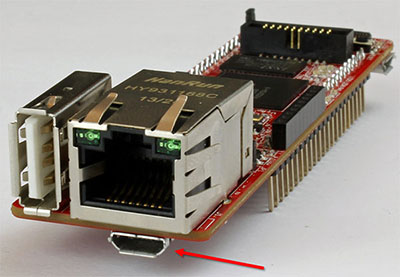 The mbed SDK contains a USB host library. Currently this library is NOT supported by the LPC4088 QuickStart Board. The reason is that the implementation mix the use of main SRAM (where stack and heap are located) and peripheral SRAM. On the LPC1768 microcontroller this is okay since the USB Host block has access to both these memory regions. On the LPC4088 microcontroller main SRAM is however not accessible by the USB host block.

The USB host implementation must be modified to only use one memory region in order for it to work on the LPC4088 microcontroller. This is currently being investigated, but there is no date when it is planned to be fixed.

Segger's graphical library emWin can be used free of charge with NXP's microcontrollers. More information about how to use this library can be found on the emWin page.

The LPC4088 has a SDRAM that must be initialized before use:

By default the SDRAM is attached to the heap and thus allowing malloc(), realloc() and free() functions to use it, see the example below.

The code that hands over the SDRAM to the heap is very toolchain dependant and if it causes you problem then comment out the two functions at the top of the sdram.cpp file in EALib.

The LPC4088 has an SPI Flash Interface (SPIFI) allowing external serial flash memories to be connected with low performance penalties. A driver API included in on-chip ROM handles setup, programming and erasure and after initializing the SPIFI driver, the flash content is accessible as normal memory (in the 0x28000000..0x28ffffff memory range) using byte, halfword, and word accesses by the processor and/or DMA.Programming (i.e. writing data to the flash) is supported for up to 256 bytes at a time (which is the size of a "page" in the flash). Programming means that a bit can either be left at 0, or programmed from 1 to 0. Changing bits from 0 to 1 requires an erase operation.While bits can be individually programmed from 1 to 0, erasing bits from 0 to 1 must be done in larger chunks (manufacturer dependant but typically 4Kbyte to 64KByte at a time).

The SPIFI driver handles flash memories connected via standard SPI as well as Dual I/O and Quad I/O with Quad I/O SPI (or QSPI for short) being the fastest. See the User's Manual for LPC4088 for a list of compatible memories.

The LPC4088 Quick Start Board has 8 MByte of QSPI FLASH from Winbond. This particular memory allows programming of up to 256 bytes at a time and erasing is done in 4KByte blocks.

To make the use of QSPI flash as easy as possible the linker scripts for the online compiler automatically places read-only parts of the code in QSPI FLASH if the space in the internal flash is too small. As for normal compiling, the online compiler will generate one binary even if both internal flash and QSPI FLASH is used. The mbed HDK is responsible for writing the binary to the correct memory addresses so no special user action is needed when flashing.

It is possible to execute code directly from the QSPI FLASH and/or put a file system on it (see next section below).

One way to utilize the 8MByte of QSPI FLASH on the LPC4088 QuickStart Board is to place a file system on it. The QSPIFileSystem is using mbed's FileSystemLike interface making using it is as simple as:

The file system can be formatted to a specific size in increments of 1MByte and will allways be placed at the top of the address range. For the 8 MByte memory on the LPC4088 QuickStart Board this means:

The file system must be placed at the top of the memory because the linker scripts places your program at the bottom of the memory (if needed).

The QSPIFileSystem has some limitations:

The QSPIFileSystem class is a subclass of FileSystemLike and not the FatFileSystem as a FAT file system has some disadvantages:

A FAT file system has some features that the QSPIFileSystem hasn't:

The QSPIFileSystem can be manipulated using one of the two sample apps or by directly downloading one of the prepared image files.

Example showing how to create a file system on the QSPI flash.

By flashing one of these images you will get an empty file system of the desired size in MBytes as indicated by the last number in the file extension, i.e. qspifs_erase.fs3 will create a 3MByte file system leaving the first 5MBytes of the QSPI free for program download.

The *.fsX files can be drag-n-dropped on the MBED drive in the same way as the *.bin files are. A *.fsX file will not overwrite the program stored in internal flash (if any).