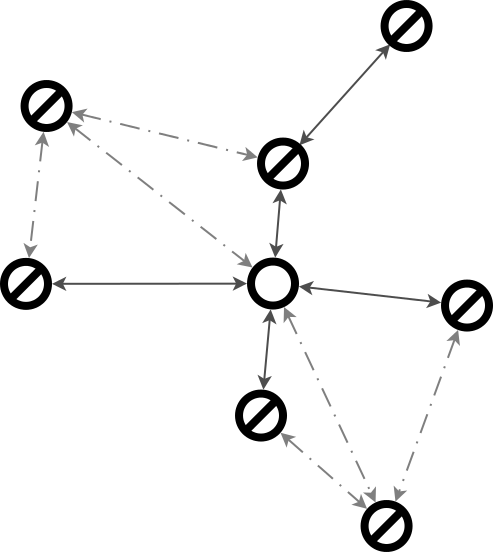 Network achieves low-power operation by device waking up at regular intervals to check if LoRa preamble exists. If so, packet is received, otherwise devices sleeps. In this type of operation, trade-off is made between transmitter sending long preamble, and receiver waking up to receive this preamble along with associate message at the end of preamble. This long preamble is only used for request packets: the reply packet will have normal 8-symbol preamble length. This is known as asynchronous low-power operation, permitting an arbitrary number of devices to operate.

Devices start operation on the network by sending a discovery request to any devices that can hear it. Any devices which hears this discovery request will then send a discovery reply at randomized time offset relative to the request. After a pre-established time limit, the discovering device will decide which device to attach to depending on signal quality and how many hops away from the central gateway the device resides.

After device has attached to network, downlinks and uplinks can be sent to/from device. To facilitate downlinks, the devices closer to central gateway will be sent a new-device-notification to inform all devices between the central gateway and the newly attached device, which devices the new device can be reached via.

All devices on network are programmed with same firmware, except for gateway. In main.h #define GATEWAY is commented-out for devices on network, or is defined for central gateway device. Only one central gateway must exist on this network. The unique identifying address of device is derived from CPU unique ID registers, of which 4 byte ID number is used on this network. Using this CPU serial number permits the same binary file to be programmed into any number of devices.

Network is configured in main.h

MAC layer timing scales according to LoRa symbol period. When spreading factor and/or bandwidth is changed, all network timing is scaled accordingly by MAC layer.
The transceivers used with the project operate at one datarate. This datarate is fixed, and must be defined at compile time for all devices and gateway.

This MAC layer uses mbed eventqueue for scheduling. To enable low power operation, events.use-lowpower-timer-ticker is defined in mbed_app.json. This requires bare-metal operation to have eventqueue use low power timer, permitting deep sleep. LoRa applications such as this do not require RTOS: bare-metal mode is preferred for typical LoRa use.

For gateway, app_gateway.cpp handles user payloads. For downlinks, an example is provided in cmd_downlink() where destination and payload is entered on serial port. All uplinks are handled in callback function gateway_uplink().

This page describes how to use the network, for more detailed description of implementation, see details page.

The STDIO UART is used to send and receive user-payload on the gateway, but is also available on end-devices. This serial port is configured at 115200 : 8,N,1.

For the list of downstream devices, on start each row is printed directly attached device. If devices are attached further downstream, they will be subsequently printed on the same row.

Use 3 devices for testing: one gateway and two devices.
Three devices required for checking message repeating (relaying) function. The gateway device must be installed at some distance to prevent both devices from connecting directly to gateway.
Gateway needs to be located far enough away, so signal strength preference overrides hop count from gateway.