By Daniel Hamilton and Eleni Spring

This 5x5 LED Display Snake Game is the first stepping stone to a fully functional 3-D snake game on a 5x5x5 LED Cube which will be built in a future project. This introductory project serves to provide experience for soldering the LEDs and creating a framework for the more involved LED cube. For this more simple first step project, the following hardware is required: 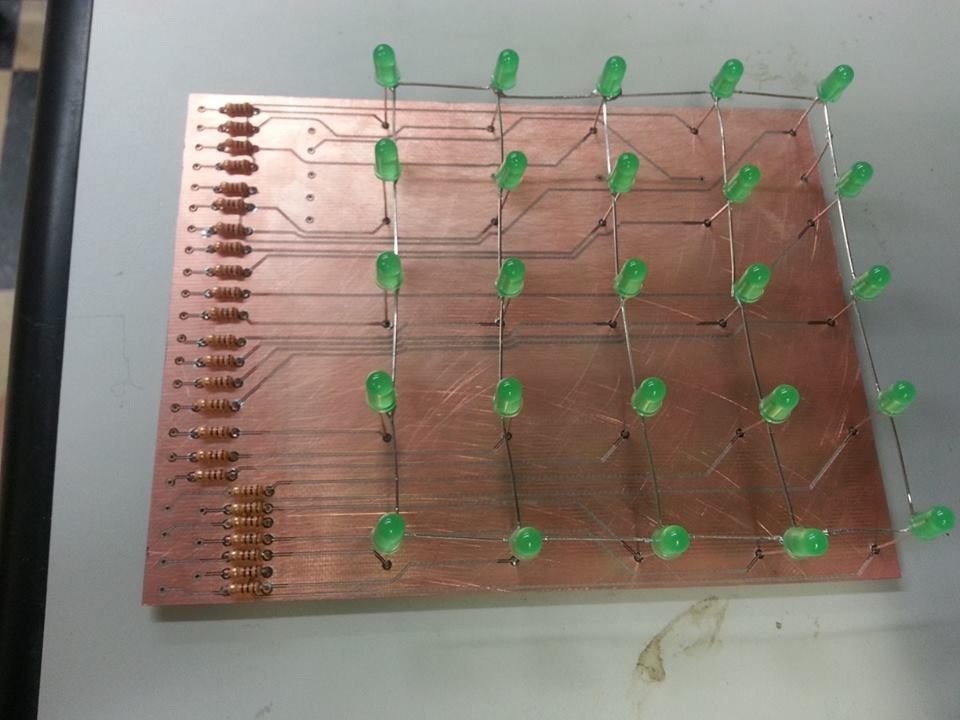 Because this design will eventually become a fully functional LED cube, a desire for multiplexing is kept in mind when designing the LED matrix. Every LED anode has its own pin, while all LEDs share a common ground. This means that 25 digital output pins are needed just for the LEDs, not to mention two analog inputs for the controller. In order to accommodate these requirements, an I/O expander like the MCP23S17 is required, which can be controlled using SPI.

The goal of the game of snake is to eat pellets to make your snake as large as possible without running into walls or yourself. This becomes more difficult as the snake gets larger and your speed increases.

In order to build the 2D LED Matrix, we took a piece of wood and drilled holes to place the LEDs in as we soldered them together as seen in Figure 2. 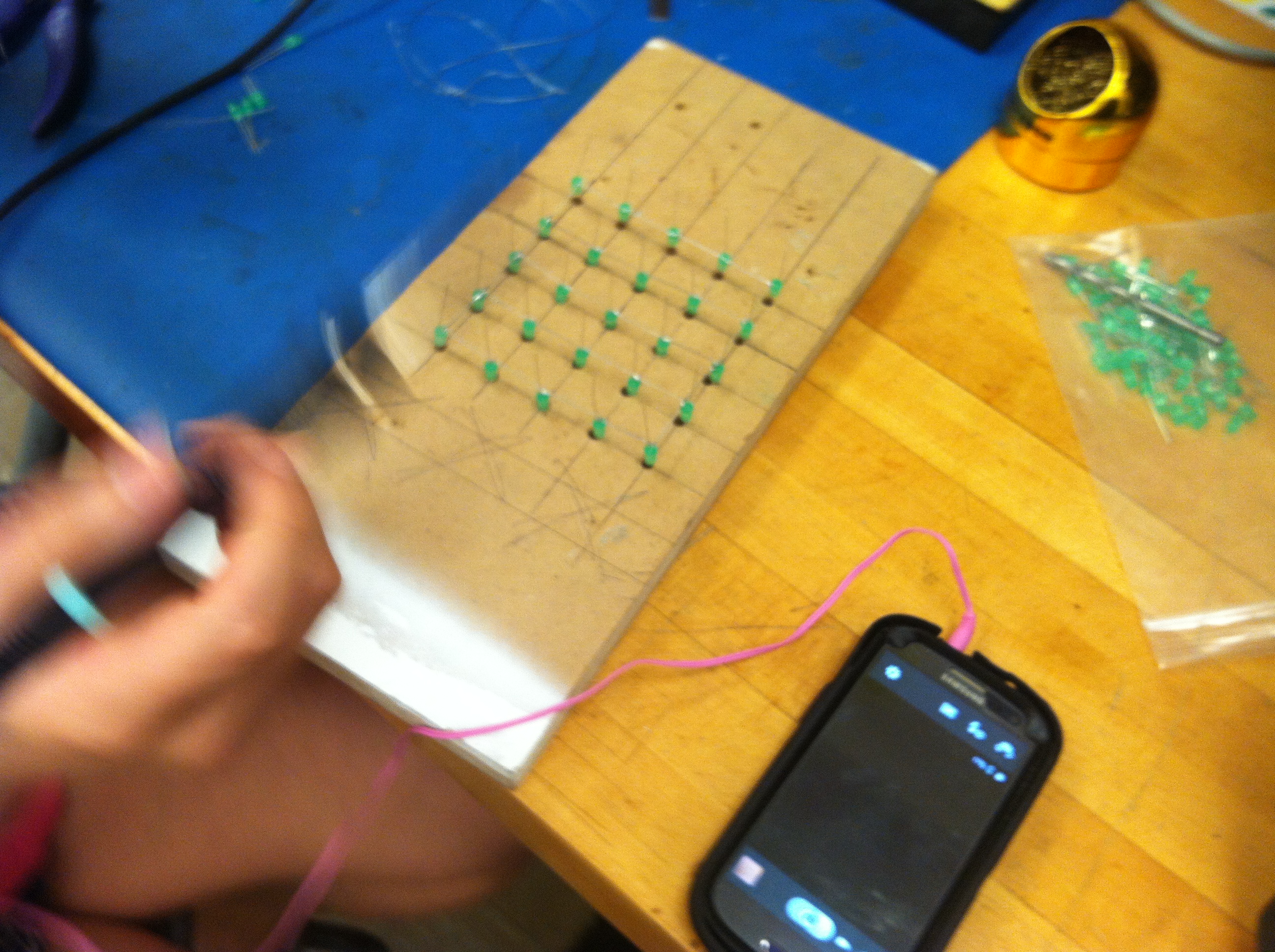 Figure 2: Soldering LEDs together using wood block as a base

This template ensures equal spaces between the LEDs, the end result is much more ordered than a free-hand attempt would be. The same template must be used for future layers of the cube as well.

We decided to go ahead and design a PCB to hold the LEDs and resistors, as well as be the base for the later LED cube. A protoboard should work just as well though. Figure 3 shows the PCB design layout, and the files can be downloaded below. 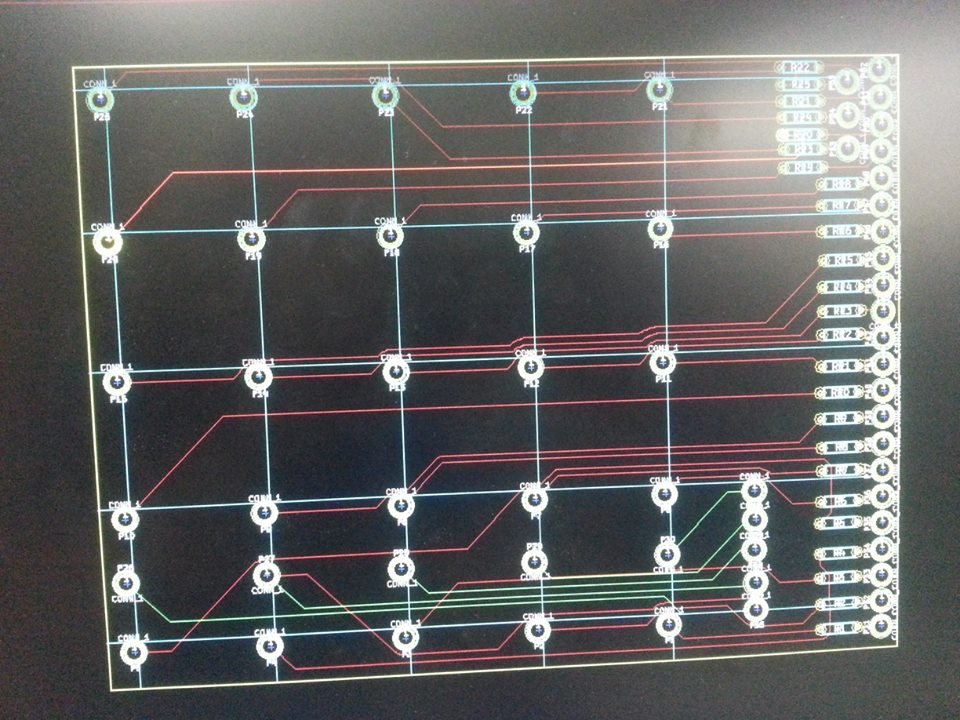 Figure 3: PCB layout for 25 LEDs, 5 leads for ground (one for each layer of the cube to come later) and 25 resistor mounts.

Connecting to the mbed

Using the PCB design above and the syntax LED[row][column]

The code consists of a few major classes which work to make up the entirety of the display driver, the game mechanic, and input/output control. Below is a breakdown of the major classes and subfiles:

Video 2: Notice the speed increase as I play the snake game.

The snake itself is distinguished from the pellets because the snake is moving. There is a counter, called snakeUpdateCounter which counts up to a value, mySnake.movementSpeed, in order to determine how quickly the snake moves. The food is moved with the simple rand() function and does not currently use a seed, meaning the order of food location does not change. When the Snake runs into a wall or itself, the LEDs will all blink until the mbed is reset.

The PCB mounting holes were made a little too small, and the PCB material is rather cheap and difficult to solder. Thus, one of the LEDs isnot fully connected, which is our next step. The game itself could be further improved as well to keep track of score, allow for newgames without a mbed reset, and a better randomization of the food.

After the minor fixes mentioned above are completed, the objective will turn to adding 4 more layers on top of the current one using the same technique mentioned in Section 1. This will create a 5x5x5 cube, meaning PORT_B will very likely be needed for additional pins, as well as additional inputs to move the snake along the Z-axis as well as the X and Y.