After being frustrated by the SPI system's performance, I ended up using an approach inspired by Paul Stoffregen's OctoWS2811. This uses 3 of the 4 DMA channels triggered by the TPM0 timer PWM and overflow events.

This design will allow for up to 16 strings of up to 60 (limited by RAM space) WS2811/WS2812 LEDs to be driven on a single port. Adding more strings takes the same time to DMA, because the bits are output in parallel.

Here is my test program:

Here's 60 LEDs on a single string, at 10% brightness: https://www.icloud.com/sharedalbum/#B015oqs3qeGdFY

Note though that the 3.3V output from the FRDM-KL25Z's GPIO pins is OUT OF SPEC for driving the 5V WS2812 inputs, which require 3.5V for a logic HIGH signal. It only works on my board if I don't connect my scope or logic analyzer to the output pin. I recommend that you add a 5V buffer to the outputs to properly drive the LED strings. I added a CD4504 to do the 3.3 to 5V translation (mostly because I had one). You could use (say) a 74HCT244 to do 8 strings.

The way I have my code set up, I can use up to 8 pins on PORTD. However, changing the defines at the top of WS2811.cpp will change the selected port.

Alternatively, you could use another port to get more strings. Watch out for pin mux conflicts, though.

Here are your choices:

Here is how the DMA channels are interleaved: 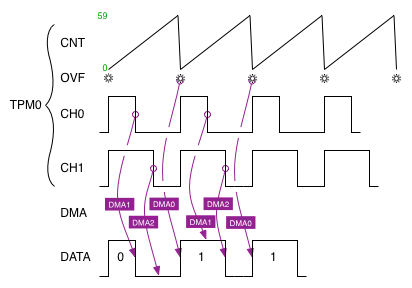 The way I have it set up to generate the three phases of the required waveform is this:

At timer count = 0, DMA0 fires, because it's triggered by TPM0's overflow (OVF) event. This results in the data lines being driven to a constant "1" level, as the data that DMA0 is programmed to transfer is a single, all-1's word. (This is the easiest way to explain what is happening; this is the way I'd wanted it to work, but I had to use as much precious RAM as for the RGB data to hold 1's to get it to work).

At 250 nsec, DMA1 fires, because it's triggered by TPM0's CH0 compare event. This drives either a 0 or 1 level to the pins, because DMA1 is programmed to transfer our data bytes to the pins.

At 650 nsec, DMA2 fires, because it's triggered by TPM0's CH1 compare event. This results in the data lines being driven to a constant "0" level, as the data that DMA2 is programmed to transfer is a single, all-0's word.

Because this library uses three of timer TPM0's six channels (and sets TPM0 to 800kHz), you will need to select TPM1 or TPM2 output pins if you want to use PwmOut pins in your program (for instance, for RC servos, which want a 50Hz frequency). If you just want to change discrete LED brightnesses, you can use TPM0's CH3, CH4, or CH5 pins. Just make sure that you set up your PwmOut instance at the same frequency.

Here is a table showing the assignment of timer resources to PwmOut capable pins in the FRDM-KL25Z: