This project implements differential drive on a four wheeled robot, gives it wireless communication using Xbee modules, and sends commands through a virtual COM port on a Windows 7 PC using TeraTerm. It is suggested to first familiarize yourself with these parts since this demo will assume the reader has a basic understand of what they are and how they used:

This demo has a specific hardware and software setup that was used with a specific robot; however the general implementation can be used for almost any two wheeled (or 4 wheel paired) robot. The basic general IC components need to run the robot properly are the mbed, an H-bridge,

Note: Xbee Modules had a wide range of breakout boards where some pins are switch and the VCC pin could be right next to the GND pin. Double check datasheets and pin outs to make sure there is not a misplaced connection. Also, it is recommended to have two USB connections to mbed for debugging purposes when you are trying to learn and understand how the modules work. Using the XCTU software from Digi is extremely helpful and recommended. 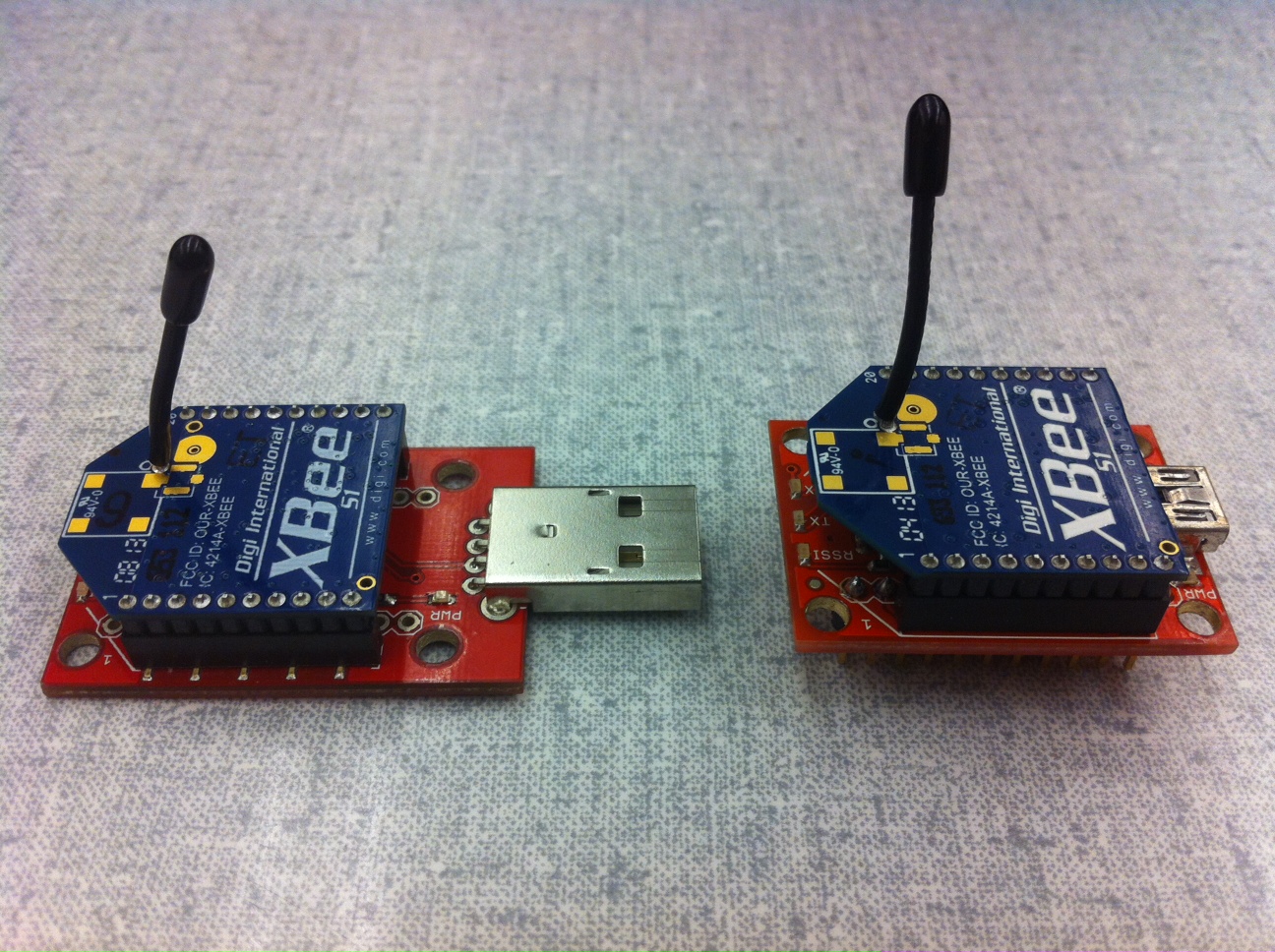 GND of the H-bridge should also be connected to the GND of mbed (and therefore battery GND also). Depending on the Voltage needed to power the H-bridge you can use mbed's Vout (3.3v) or VU (5v) pin. H-bridge will need mbed PwmOut pins to allow the H-bridge to drive the motors at different speed (and direction depending on the model of H-bridge), so connect some PwmOut mbed pins to the correct pins on the H-bridge. The demo code uses pins 22,21. Some boards also need Digital Out pins to control the motor direction, but the H-bridge use in this demo does not need these pins so add them as needed.

Specific Implementation Used in this Demo

There was a 6 cell 7.2v 1500mAh NiCD battery used to power all the parts that was connected exactly in the same manner as the general guidelines section.

H-Bridge (This demo used a Sabertooth v1; VCC is red, black and green are ground, the colorful 3 sets of 3 wires are from the Sabertooth H-Bridge see the data sheet to know what each color does): 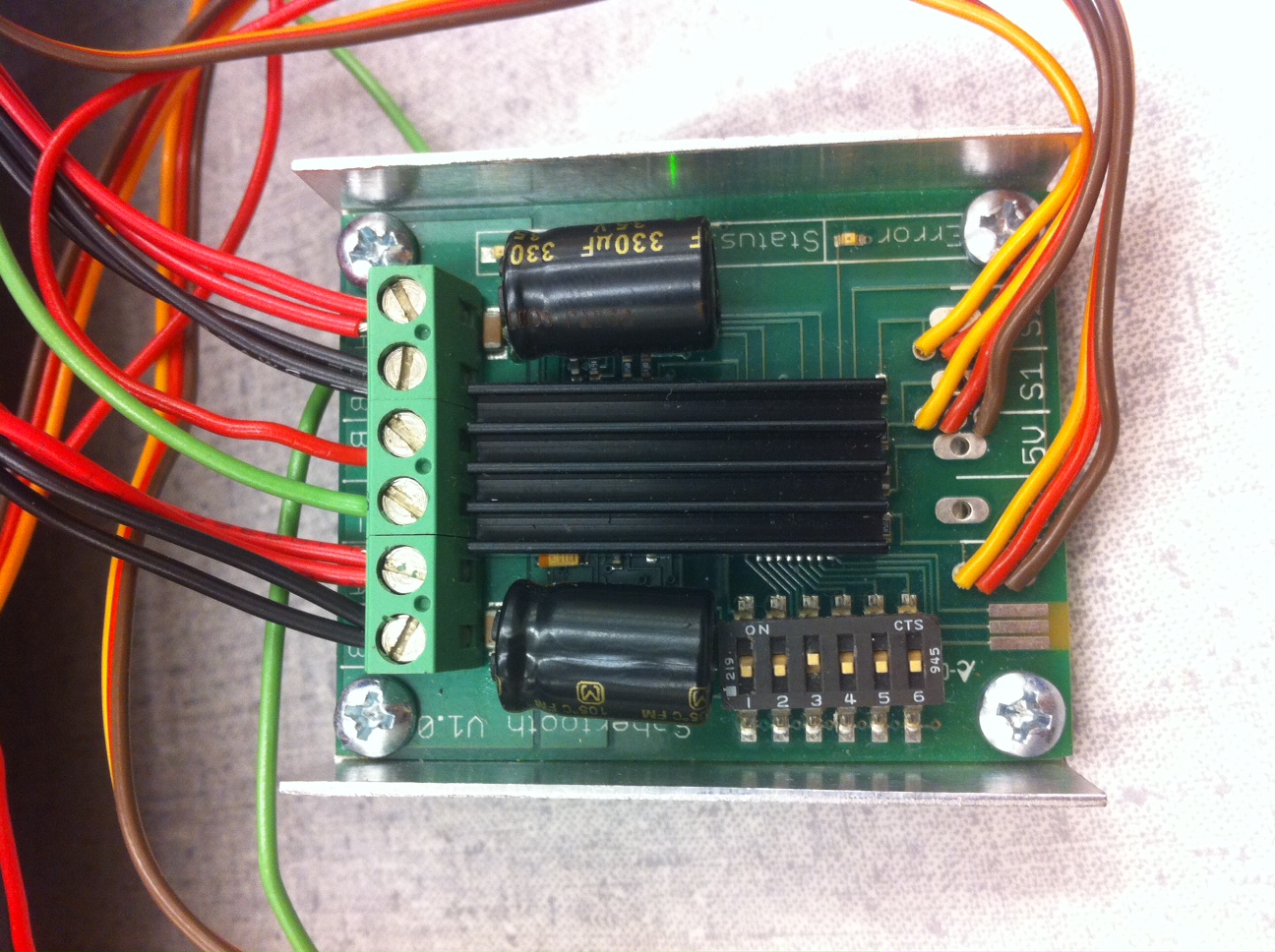 Mbed and Xee Connections that were described above (all wiring is color coded: green is ground, red is VCC, yellow is serial data or PWM): 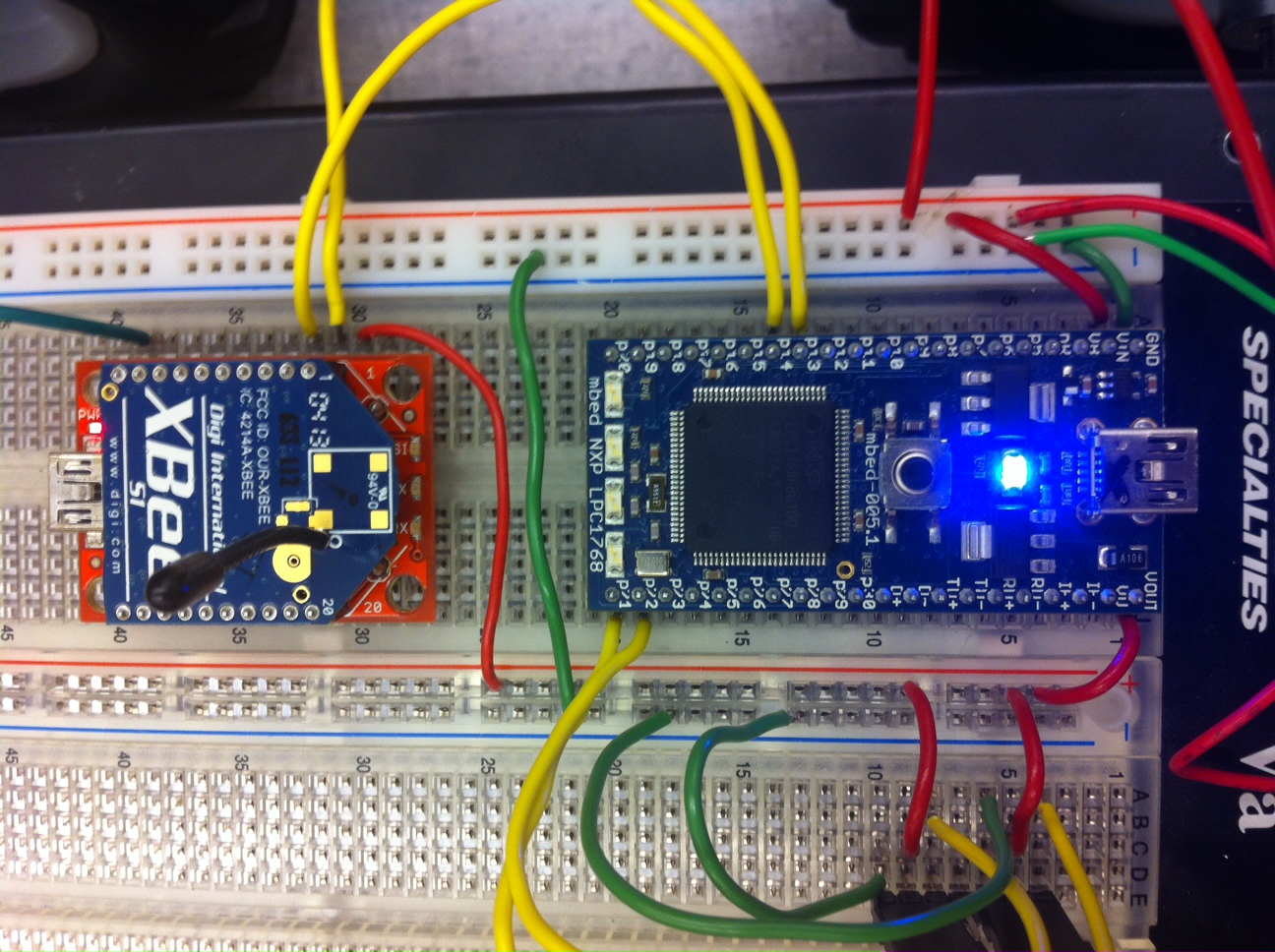 All connections shown between battery, mbed, and xbee: 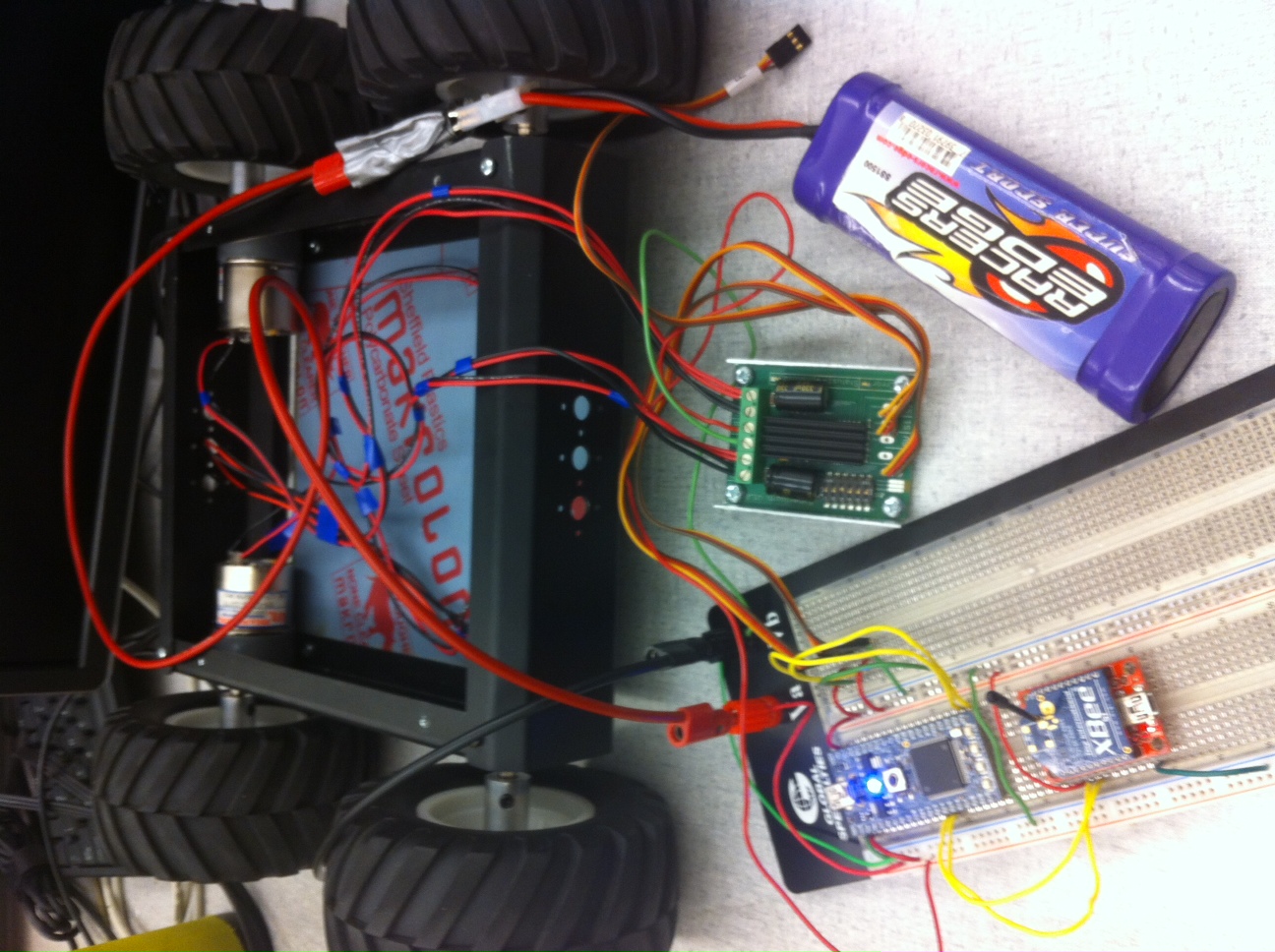 Drive ready setup for the robot: 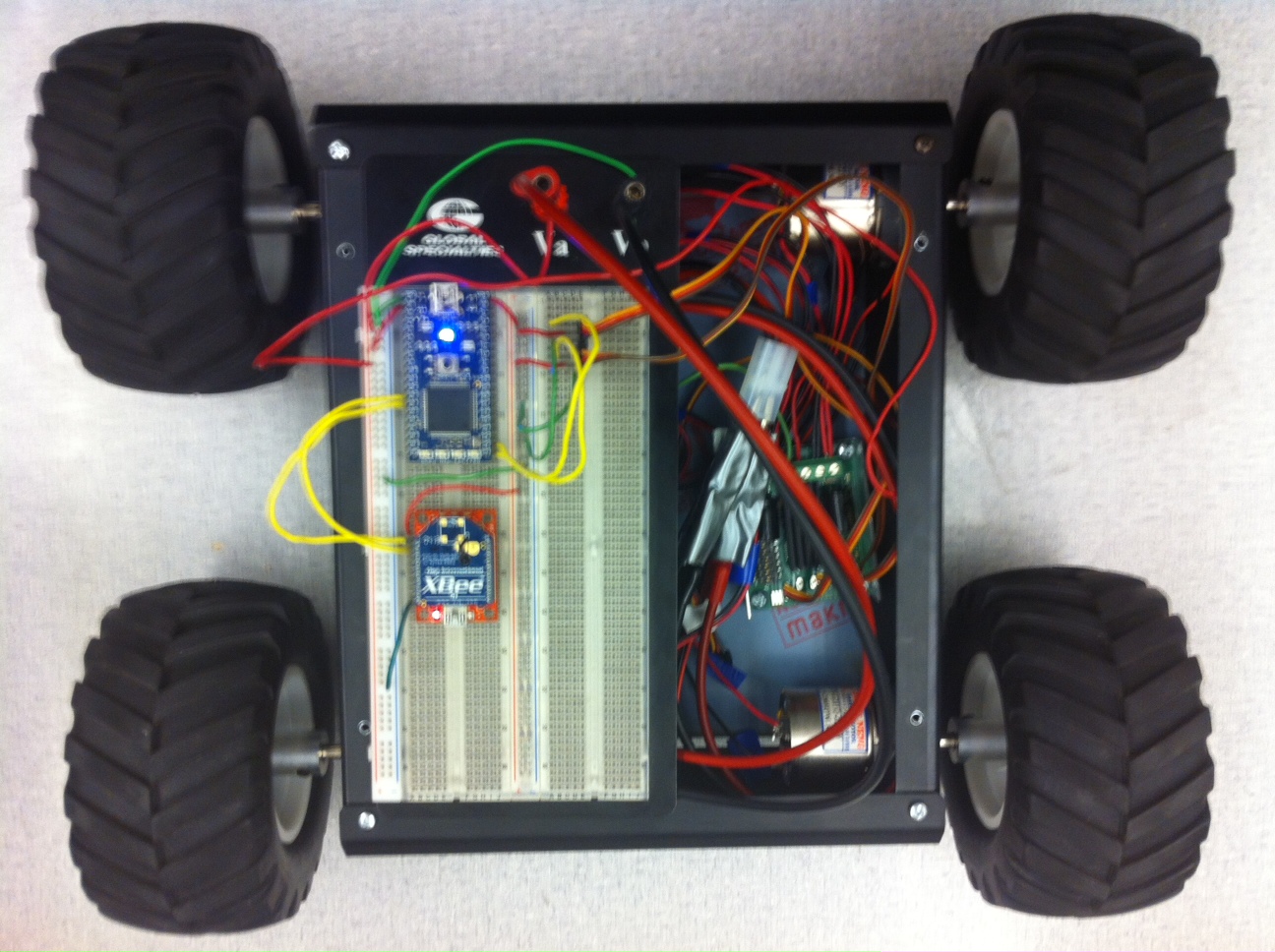 Software to Run the Robot 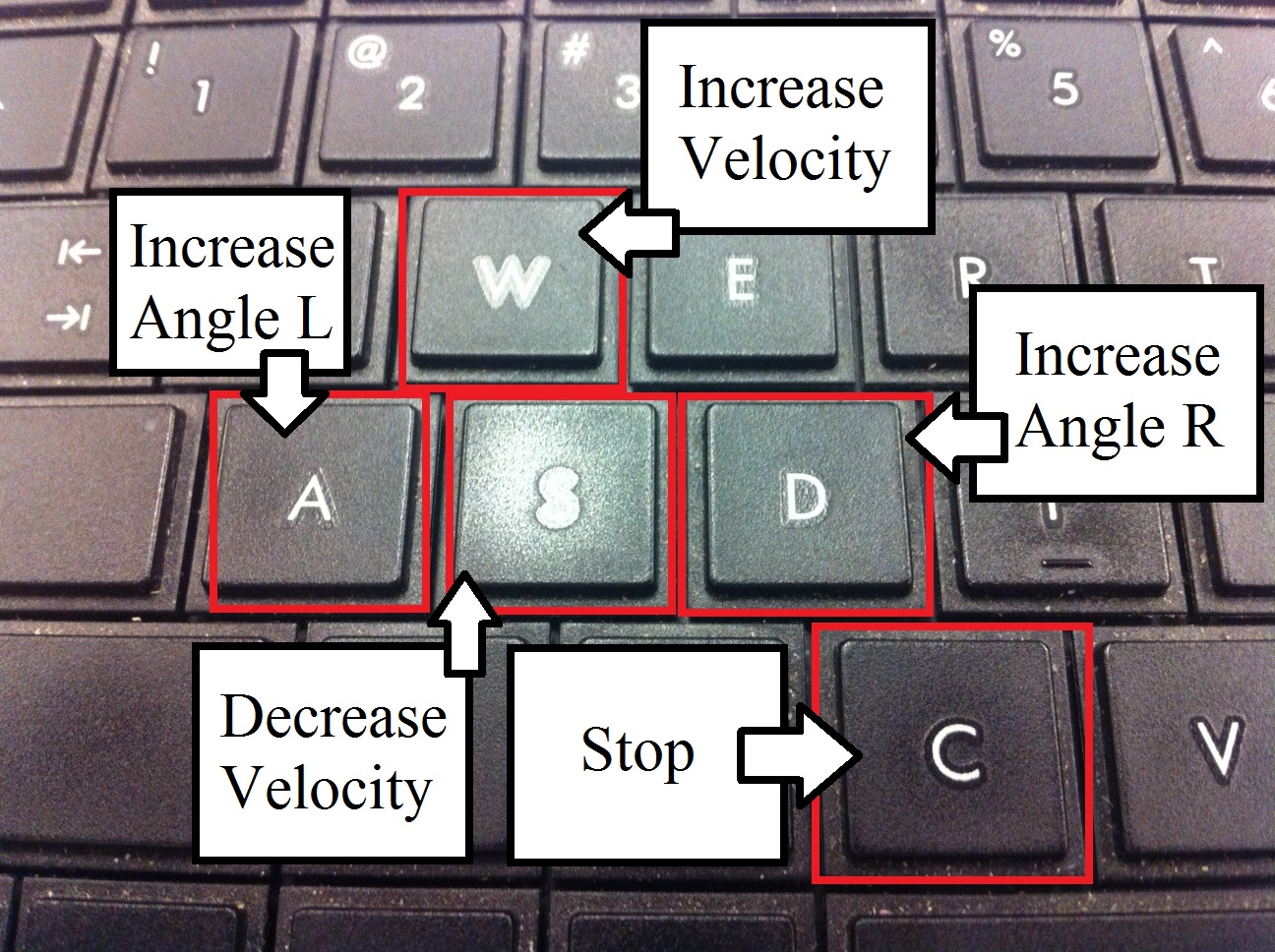 I am trying to use your code for my differential drive robot. I have the following questions for you 1. What DIP switch configuration did you use in sabertooth? 2. If we change the v1 value to 1 to maximum PwM signal, the motor does not run. Why?

I am a beginner in this area, and I would really appreciate any help.

Hello, I am trying to use your code for my differential drive robot. I have the following questions for you 1. What DIP switch configuration did you use in sabertooth? 2. If we change the v1 value to 1 to maximum PwM signal, the motor does not run. Why? I am a beginner in this area, and I would really appreciate any help.