Whilst the IoT 7 talk focused on the graphics library and online submission aspects being promoted, an interesting coincidence of the talk was that people could send messages to the thermal printer during it. After thinking for a while about where to put our printer, we asked ourselves "How about if the feedback element was *the focus* of the demo, rather than an aside?".

Thus, we fashioned a giant question mark out of old wooden flooring, attached the thermal printer to the "dot" section, and programmed it to print out SMS messages upon reception. Thus was borne the adhoc instant feedback point for anywhere gatherings: 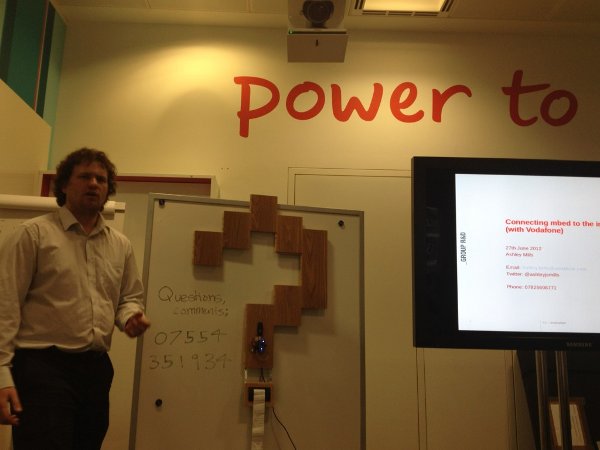 From a pragmatic standpoint the demo illustrates the SMS functionality of the Vodafone K3770 dongle driver library for mbed. It is comprised of three components: the circuit; the software; and the physical form. These are described in the next sections.

The circuit layout for the question mark is shown below. 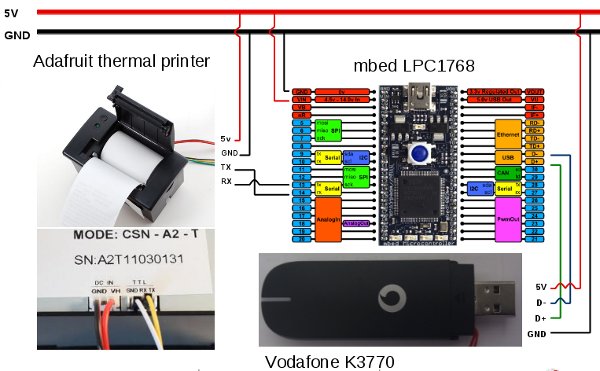 The circuit consists of an mbed microcontroller and only two additional hardware components: (i) a Vodafone K3770 modem, (ii) an Adafruit thermal receipt printer.

The connection from the mbed to the thermal printer requires four different elements: the first two being 5V and GND for power, and the second two being transmit and receive lines of a TTL serial connection. Practically, it isn't really necessary to connect the transmit line unless status feedback is required from the printer, but it requires little extra effort. Note that the printer actually has two ground inputs as can be seen in the bottom left of the picture above.

WARNING: The USB dongle draws high peak currents during transmission and so is sensitive to the power supply. This may manifest as an inability to register, or function correctly. It is best practice to power the dongle from a reliable 5V power supply if possible, or alternatively to buffer the dongle power supply with a suitable capacitor.

The mbed program which drives the printer is multi-threaded and runs on the RTOS. The first thread scheduled by the RTOS is the standard c *main* function. From this, a thread is launched to control the printer. For pragmatic purposes, only the second thread is shown below. Please see the RTOS entry in the mbed cookbook for details on how to control threads.

Space is allocated for the store the sender number in "numBuffer", for retrieved SMS messages in "msgBuffer", and for the number of SMS messages received in numSMS.

In overview the loop simply runs forever, retrieving items from the SMS queue and printing them. The printer is very trivial and simply prints whatever is sent to it. The printer library has additional functions for setting font tone and other properties of the printer. Let us step through the loop internals:

Now we are getting into using the K3770 dongle library. This line retrieves the number of short messages in the dongle mailbox. It uses the getSMCount function:

getSMCount takes a pointer to a size_t number variable, into which the number of short messages is stored. The function returns an integer indicating success or failure of the operation. Thus, the first line, both retrieves the number of SMS and checks that the call was successful.

If there are some SMS in the buffer, then continue.

The library maintains a list of received message identifiers in a FIFO queue. The getSM function is used to retrieve messages from this queue. When the function is called, it retrieves the oldest message in the queue. It is specified as follows:

The function returns an integer indicating success or failure.

Thus the program line both retrieves the oldest message in the FIFO queue and checks for success of this operation.

Once the message is retrieved, it is simply sent to the receipt printer for printing. Following this, a couple of linefeed characters are sent so that the latest message will be separated from the last in the paper stream. In addition, the printer head is inside the printer, so in order to see the message a couple of line feeds are necessary.

After printing the message, or if any of the above stages fail, then the thread just waits for 500ms.

That's it! The software then loops round again to check for further messages.

The full source code for the printer program can be found here:

The printer has been used at a number of events, these are some of the, sometimes strange, messages it has received: