I have imported the program from this page into my compiler: https://os.mbed.com/cookbook/TLV320-WAV-Player

When I compile the program, a .bin file is created but I get the error messages shown in the screenshot below. Presumably this code worked in 2012 when the program was published. What might have happened in the interim and how can I fix the errors please?

My hardware platform is LPC1768 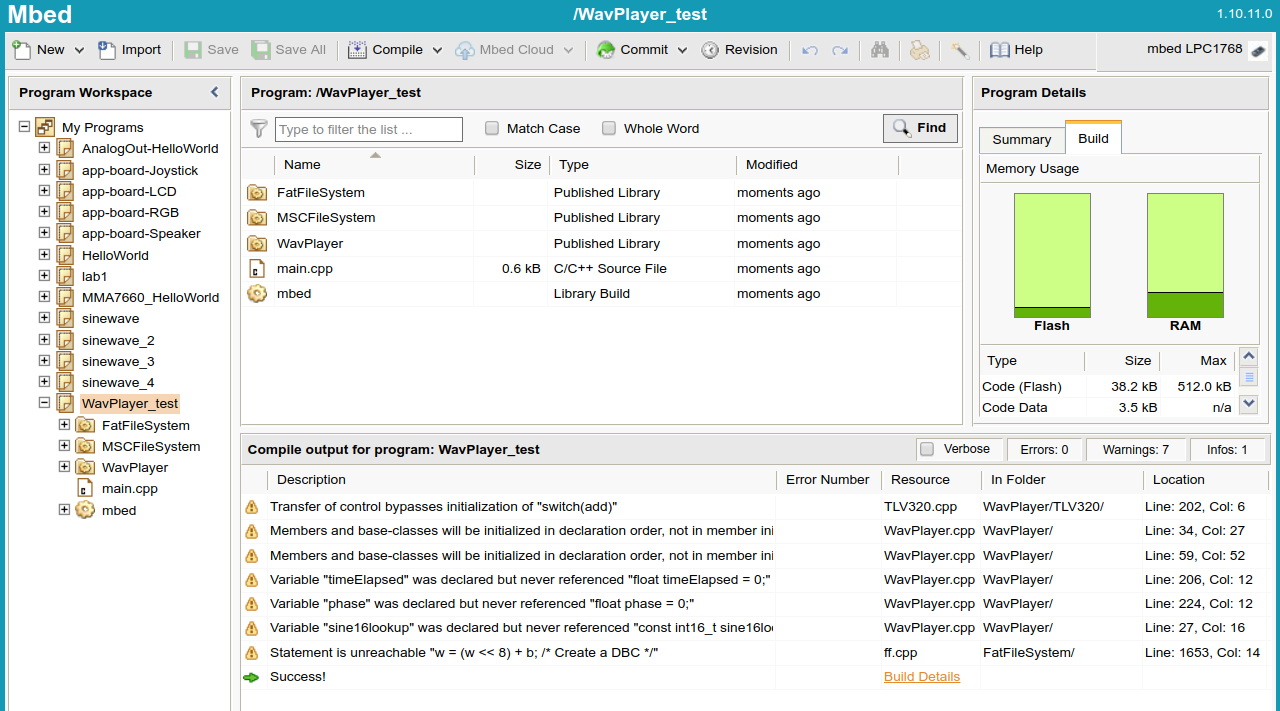 When I run the program, the serial terminal returns the following message

Edit #1 Ok, I forgot to use the pull up resistors on the I2C pins of the TLV320. Now that I have corrected that, the printf output is

There is now an audio output from the TLV320 ! ( The USB drive has test.wav on it, downloaded from https://mbed.org/media/uploads/p07gbar/test.wav)

Would still appreciate some reassurance on the warning messages output by the mbed compiler and the program itself. I don't know how important they are or how to fix them.

I'm glad that you were able to fix the issue! As for the compiler, the warnings that appear should be harmless to the program. However, if you would like to fix them, they should be relatively simple fixes:

The first warning “Transfer of control bypasses…” is because the switch statement is treated as a goto statement. As a goto, C++ language does not allow you to bypass declarations with initializations. To fix the warning, you should add curly braces around all the cases in order to contain them within a local scope:

The next two warnings follow the rule that data members should be initialized in the order they were declared in the class definition. To fix the warnings, you should go into WavPlayer.h and change the order of flag_play, i2s, and codec to match the order of their initializer list:

The final warnings for “variable <blank> was declared…” appear because the program never uses those variables after they are initially declared. Hope this helps!

If this solved your question, please make sure to click the "Thanks" link below!

Thanks, Karen. I'm very grateful to you for your time and trouble.

I will implement the changes that you have suggested. The program seems to be working as it is but I would like to understand how to fix the warning messages. Thanks again.