mbed time delay interfacing with LabView (code and GUI below)

I have been working on a small personal Labview/mbed project which is currently capable of functioning the brightness of the 4 LED's and read the two potentiometers.

Unfortunately there seems to be some lag on the mbed which seems to be overloaded by the data passing in and out through the usb port. I have seen some other posts which discuss reducing the baud rate. I suppose the main aspect to consider is the actual bandwidth on the USB cable which I believe has a maximum bandwidth 60MB/s.

Not sure whether LabView can show how many bytes of data are passing through the USB port during the run of the simulation?

Here is the Block Diagram

I did try to build an array block for the mbed application board pots using the mbed read block similar to that created for the LED's however that didn't seem to work for outputs. Please feel free to provide any alternatives upon how to build something similar to an array block where by more outputs can be connected to one mbed read block. I did try connecting p19 and p20 to one read block however the issue was that when one of either pots were moved on the mbed application board both Gauges were caused to move, therefore an undesired outcome.

Feel free to have a go and if you manage to find a way to improve response time, then you are more than welcome to post it.

Here is the Front Panel

Here is the code compiled for the mbed

Will let you know if I get any further ahead in due course. Otherwise drop a line with any ideas!

After some time I managed to use the event structure that managed to get all the LED's turned off upon using the STOP button. 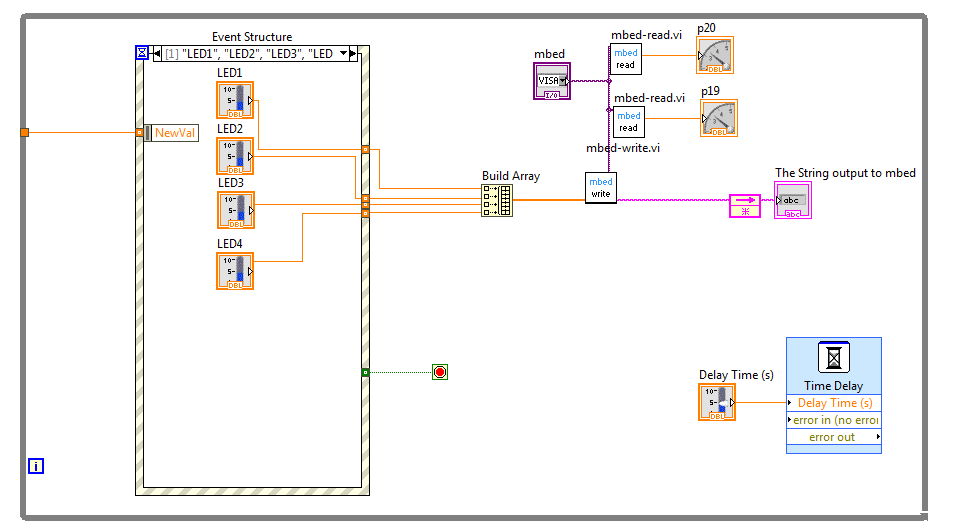 It looks like your code is fixed so I edited away my reply.

This means that the question has been accepted and is being worked on.