mbed to Pmod Adapter board with ethernet and microSD connectors

mbd2pmd Web Server uses the mbd2pmd adapter board to serve files from a microSD card and provide a RESTful interface to the Pmod connector.

This is a baseboard for the mbed LPC1768 that provides the following features:

This board allows you to put just about any Pmod board online for IoT. This is the smallest board that provides ethernet and microSD connectors and makes a great compact web server.

To assemble the board you will need the following connectors: 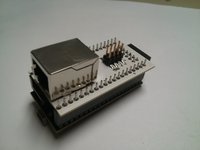