The SX1509 is a 16 Output I/O Expander that communicates over an I2C bus interface. Additional features of the I/O expander include programmable pull-up/pull-down on all I/O pins, an integrated LED driver interface with 256-step PWM control, and a keypad scanning engine with input debouncers for a matrix of input buttons. A breakout board of the SX1509 can be found at Sparkfun for use with prototyping on a breadboard.

If you are using the same breakout board from Sparkfun as seen in the top image, you may have already had to tackle the problem of adding header pins. In the case of this breakout board, simply soldering standard 0.1" pitch male header pins through all holes will make the board unable to be plugged into a breadboard. One solution to this can be found in the image above.

The list below contains the pin names used for interfacing with the mbed.

By looking at the diagram from the SX1509's Datasheet, one will notice 2 user settable address lines (provided below). These are used for providing alternative address if you have need to change it (another chip with same address, multiple SX1509 chips). Regarding the breakout board from Sparkfun, both of these lines are connected to ground, and that translates to an I2C address of 0x3E.

One last thing to note about Sparkfun's schematic for the breakout board is that pull-up resistors are provided for the SDA and SCL. This means no other resistors are needed to setup a functional I2C bus.

There is also a pin named OSCIO on the breakout board that can be used for different applications and programmed to different functions. For most applications, it is not needed and will not be covered here.

One can control an LED connected to the SX1509 by using the SX1509::setupLED(LED_t) method from the C++ library. A helloworld program of controlling this interface can be seen below.

Below is a video showing an LED fade in and back out very quickly.

Using an LED matrix like the ones that can be found at Sparkfun, one can create their own control interface using the SX1509. A helloworld program is given below that makes use of the library. 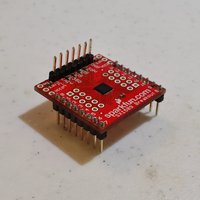