A debug probe based on the NXP LPC11U35, supported by the DAPLink project. It provides drag and drop programming to a various target MCUs, and a CMSIS-DAP interface for debugging.

If you wish to have ability to debug with UART too check out our identical DIPDAP programmer.

NOTE : this is a debug probe only. It is not a platform that contains a target MCU

This debug probe is supported by the DAPLink project.

For a overview of DAPLink, please refer to the handbook page

To find out more about the DAPLink firmware, see the GitHub page at :

When a new SWDAP is plugged in to your machine, it will not contain valid any firmware, and so will appear as a disk drive called "CRP Disabled" as.

You can re-program your SWDAP at any time by plugging it in with the button held down. This will cause it to appear as the "CRP Disabled" drive, at which point you can follow the steps above.

To use the SWDAP, simply connect to your host machine with a micro-USB cable, and to the target system using a 10 pin Cortex debug cable.

The mbed-HDK can be found on GitHub, along with release notes and documentation. 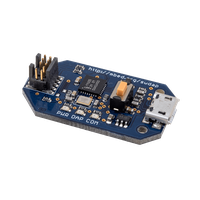 L-Tek is engaged in the development and production of electronic modules and electromechanical components for the electronics industry.