Grove Recorder is based on ISD1820P, which can record 8~20 sec by set resistor and cycle play.

Grove - Recorder is based on the ISD1820P chip, and can record 8-20 secs of audio. It offers true single-chip voice recording and provides non-volatile storage. The recording time can be varied by changing the sampling resistor (R6) on the module's PCB. By default, the resistor on-board has a value of 100KΩ and thus the module offers a default recording time of 10 secs. The audio recording can be directly controlled by the on-board push button or by a micro-controller such as a Seeeduino. 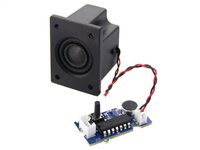 A hardware innovation platform for makers to grow inspirations into differentiating products.