The i.MX RT1050 is a crossover device with a 600 MHz Cortex-M7 with an i.MX-style architecture. 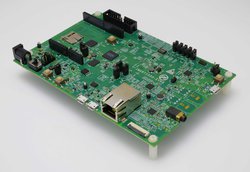 The IMXRT1050-EVKB has been designed by NXP in collaboration with Arm Mbed for prototyping all sorts of devices, especially those requiring high performance, lowest power consumption and price point.

The i.MX RT1050 crossover processor features an ARM® Cortex®-M7 core running up to 600MHz and up to 512KB on-chip RAM. It is supprted by the IMXRT1050-EVKB development board which includes, but is not limited to: SDRAM, Hyper Flash, QSPI Flash, TF card slot, dual-role USB interfaces, Audio CODEC and headers for use with LCD display, CMOS sensor, Ethernet/CAN communication, Bluetooth® and 2.4 GHz radio add-on modules. It is packaged as a development board including extension headers compatible with Arduino R3 shields and includes a built-in USB Debug and Flash Programmer.

Support for the following features of MIMXRT1050-EVK are currently in development in Mbed OS. Schedule for release is TBD.

Two development boards for the i.MX RT1050 crossover processors have been made available by NXP. They operate exactly the same, but have different part numbers as follows:

They are both supported by Arm Mbed. 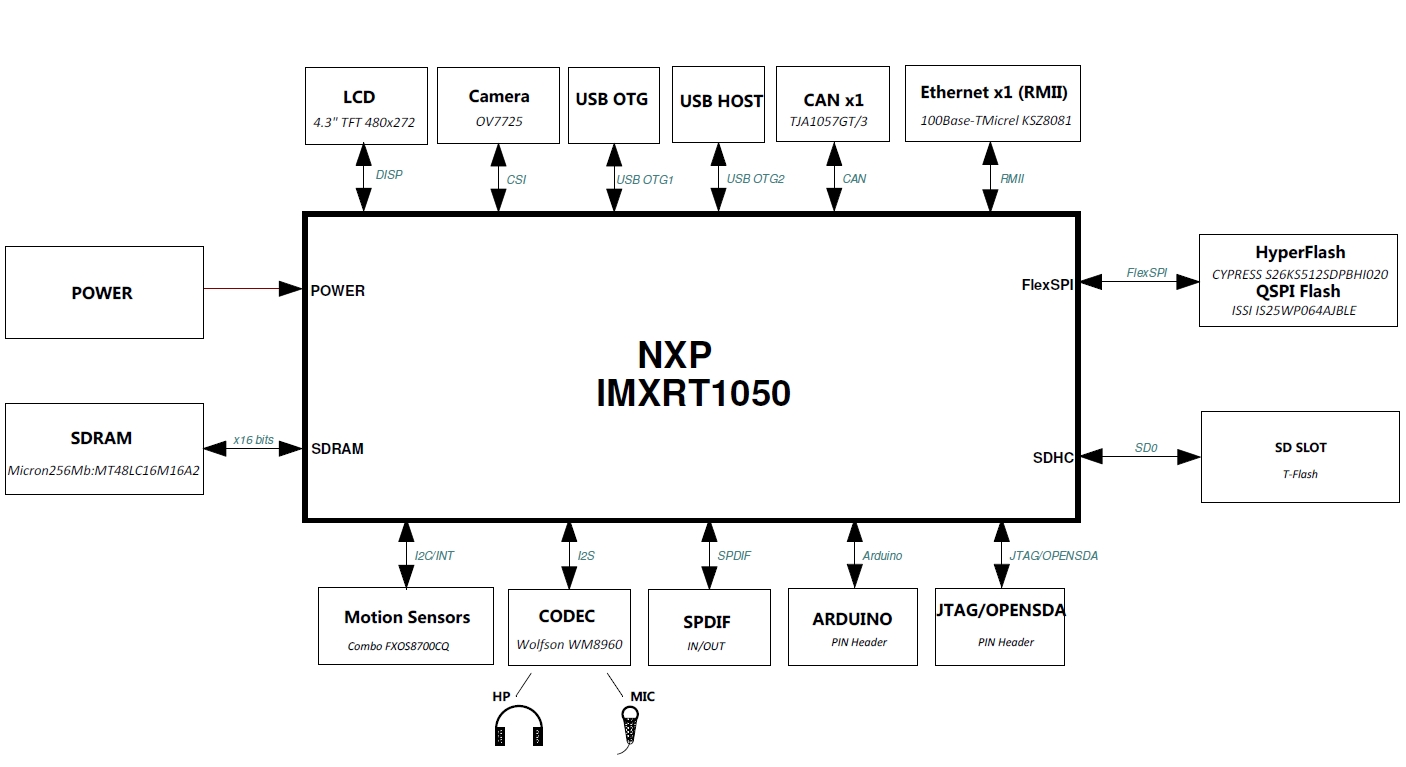 Board headers enable up to 32-pins and give access, deliver right signals to meet Arduino R3 standard 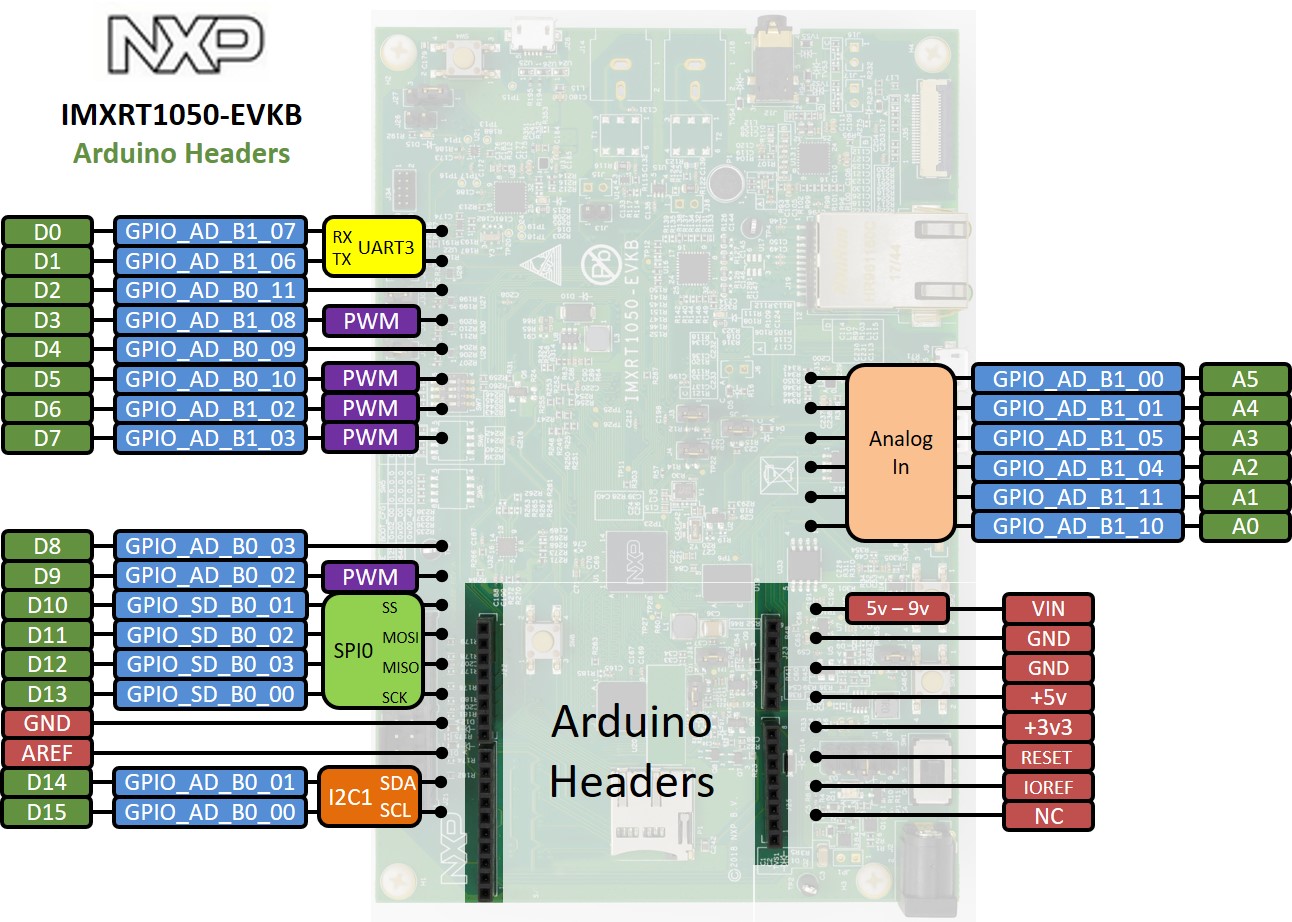 The IMXRT1050-EVKB is fully supported in the mbed platform, so it gets access to the free tools and SDK that provides experienced embedded developers with powerful and productive tools for building proof-of-concepts.

For IMXRT1050-EVKB, at the following link, choose CMSIS-DAP firmware that is compatible with OpenSDA v2.2 bootloader.

Quick Summary: hold down the reset button, plug in the usb cable to the OpenSDA usb connection, copy the new interface firmware to the enumerated drive, done!

Use the USB lead to connect your mbed to a PC. The status light will come on, indicating it has power. After a few seconds of activity, the PC will recognize the mbed Microcontroller as a standard USB drive.

Save the program binary file to your mbed Microcontroller Disk, just like you would with a normal USB disk. The Status LED will flash as the PC writes the file to the Microcontroller disk. 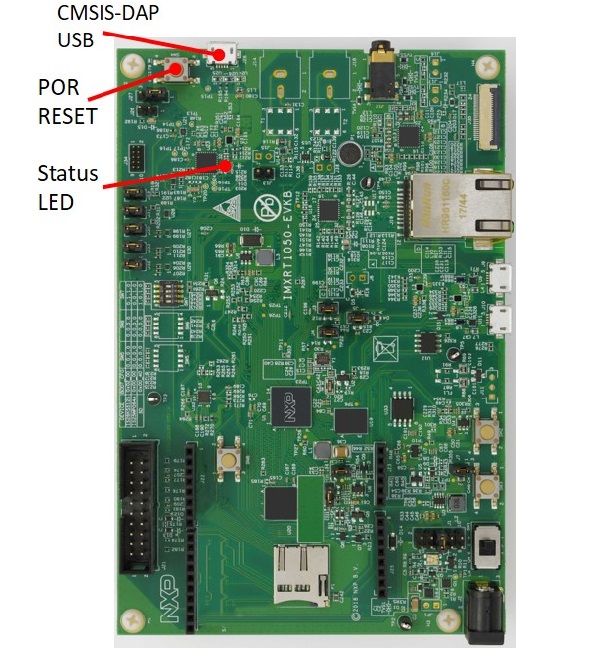 When the Reset Button in pressed, the newest program on the mbed Microcontroller Disk will be loaded in to the Microcontroller FLASH memory. The Status LED will flash as this happens.

When the program is has been loaded onto the microcontroller, it will then start it running.

It is the newest program on the mbed Microcontroller that is run after reset. We can therefore download a new program or overwrite an existing one to update the program that will run.

1. Import the Program to your mbed compiler¶

In the right panel Program Workspace Select the program you want to compile
Click on Compile in toolbar
If compilation ends successfully, you should see the comment Success! displayed in the Compile Output window available in the bottom and your web browser should download automatically the precompiled binary for the program.

Save the program binary file to your mbed Microcontroller Disk, just like you would with a normal USB disk. The Status LED will flash as the PC writes the file to the Microcontroller disk.

When the Reset Button in pressed, the newest program on the mbed Microcontroller Disk will be loaded in to the Microcontroller FLASH memory. The Status LED will flash as this happens.

When the program is has been loaded onto the microcontroller, it will then start it running.

Congratulation, you have successfully compiled your first project example, you will find more program examples for the IMXRT1050-EVKB board available on the right panel of this page or at the NXP code repositories

To compile a program for this board using Mbed CLI, use mimxrt1050_evk as the target name.