This project uses two mbeds, mounted on magician chassis, each with one xbee, two qti sensors, a dual h-bridge and a sonar sensor. The leader robot performs a set of moves that are then relayed to the other robot. The follower robot then mimics the leader robot by performing the same moves. The diagram below shows a high level view of the connected parts. 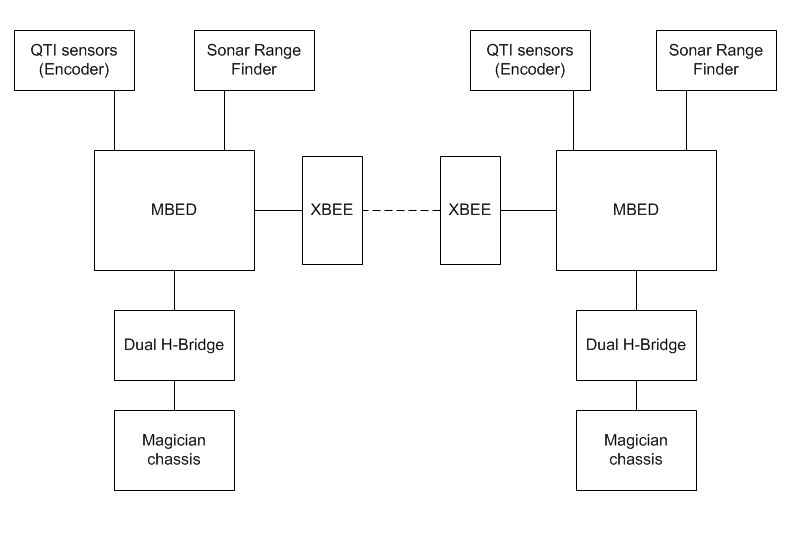 As it can be seen in the diagram above each mbed interfaces to two encoders, one dual H-Bridge that controls the magician chassis and the xbee, which communicates information to the other xbee connected to an mbed in a similar setup. Below is a picture of the hardware setup for one of the Robots. 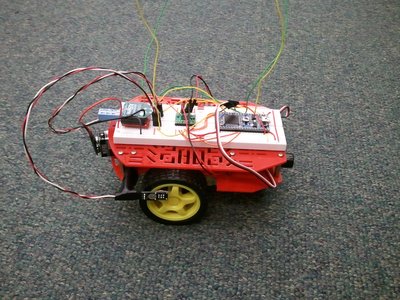 QTI sensors were used as encoders. The QTI sensors used were parallax QTI Line Sensors found here: http://bit.ly/uWgwnz. The sensor is a simple photoresistor that changes resistance based on the brightness of the object it sees. In order to measure the resistance a capacitor has to be charged periodically and some time after the capacitor is charged the analog output is measured to determine what is the brightness of the object it sees. This is achieved using the Ticker function that calls a charging and a discharging function periodically. Thus every specified period of time, the capacitor is charged and a short interval later the analog sensor value is read, after which the capacitor is discharged. The value read is then measured against a threshold value to determine whether the sensor detects a spoke in the wheel or not. Two of these sensors are mounted on the sides of the magician chassis in order to function as encoders.

The Sonar Range Finder used is a Maxbotix LV-MAXSONAR-EZ0.The Sonar works as a simple analog sensor, with 3.3V and GND. The output of the sensor is used to detect the distance of the robot from a wall and prevent collisions from walls.

In order to control the two motors of the magician chassis a dual H-Bridge is used. The Dual H-Bridge used is the SparkFun breakout board containing the TB6612FNG dual H-Bridge chip. (http://www.sparkfun.com/products/9457) The breakout board contains two H-Bridge drivers that can be interfaced with two DigitalOut pins and a PWM pin each. Furthermore the chip requires the Motor Voltage which can be supplied through the H-Bridge directly. For our purposes, a 9V battery iss used to supply power to both the motors and the mbed.

For communication between the robots the Xbee modules are used. The mbeds connect to their respective xbees via serial and can send commands to the other mbeds simply by pushing data into the Xbee modules. Similarly the data can be retrieved from the Xbees by using a serial command to get the data.

can you provide internal circuit connection of this experiment....please..send complete information to venkateshkonduru1@gmail.com

can you provide internal circuit connection of this experiment....please..send complete information to venkateshkonduru1@gmail.com

Hi Shahan Najam.. could you please send me the image for the circuit connection of this project with information? I apprecite it, thanks. email: faizmatrodzi@gmail.com

Hi Shahan Najam.. could you please send me the image for the circuit connection of this project with information? I apprecite it, thanks. email: faizmatrodzi@gmail.com