The program brings up the WiFi and the underlying network interface, and uses it to scans available networks, connects to a network, prints interface and connection details and performs simple HTTP operation.

This example has been used on the following platforms

Note: The ISM43362 WIFI Driver developed by ST Team can also be integrated in the mbed-os-example-client example. 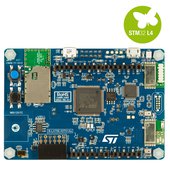 Who changed what in which revision?