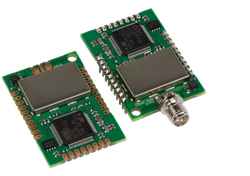 The MultiConnect® mDot™ is the first MBED integrated and deployable product. Featuring an FCC/CE certified LoRaWAN™ ready, Low-Power Wide Area Network (LPWAN) sub-GHz ISM band module. The mDot is capable of 2-way single-duplex communication over distances of up to 10 miles/16 km, line of sight, deep into buildings or within noisy environments in North America, Europe, and worldwide. An on board ARM Cortex-M4 processor, complete with developer friendly MBED libraries provide developers intelligence and decision making at the very edge of the network.

By leveraging LoRa™ technology, mDot simplifies local connectivity for Internet of Things (IoT) applications for the North American and European markets. By eliminating common deployment complexities, remote device connectivity is now simple and easy to deploy. With support for multiple interfaces, just about anything can now be connected with MultiTech’s mDot technology.

It is possible to develop offline for the mDot using mbed-cli and the Eclipse IDE. See our wiki page for more information.

To program and use the mDot, you will need a MTUDK2-ST-MDOT Developer Kit or a MTMDK-ST-MDOT.

When building with mbed-os 5 including a bootloader in applications built for the mDot requires a post-build process. The mbed tools (online compiler & mbed-cli) automatically run this process as part of an application compilation. The mbed tools currently don't support exporting pre-bulid or post-build processes, so exports for the mDot will be incomplete and will not function.

Exporting for the mDot platform is not recommended.

Instead of exporting, we recommend configuring your IDE or makefile to invoke mbed-cli to compile your application. 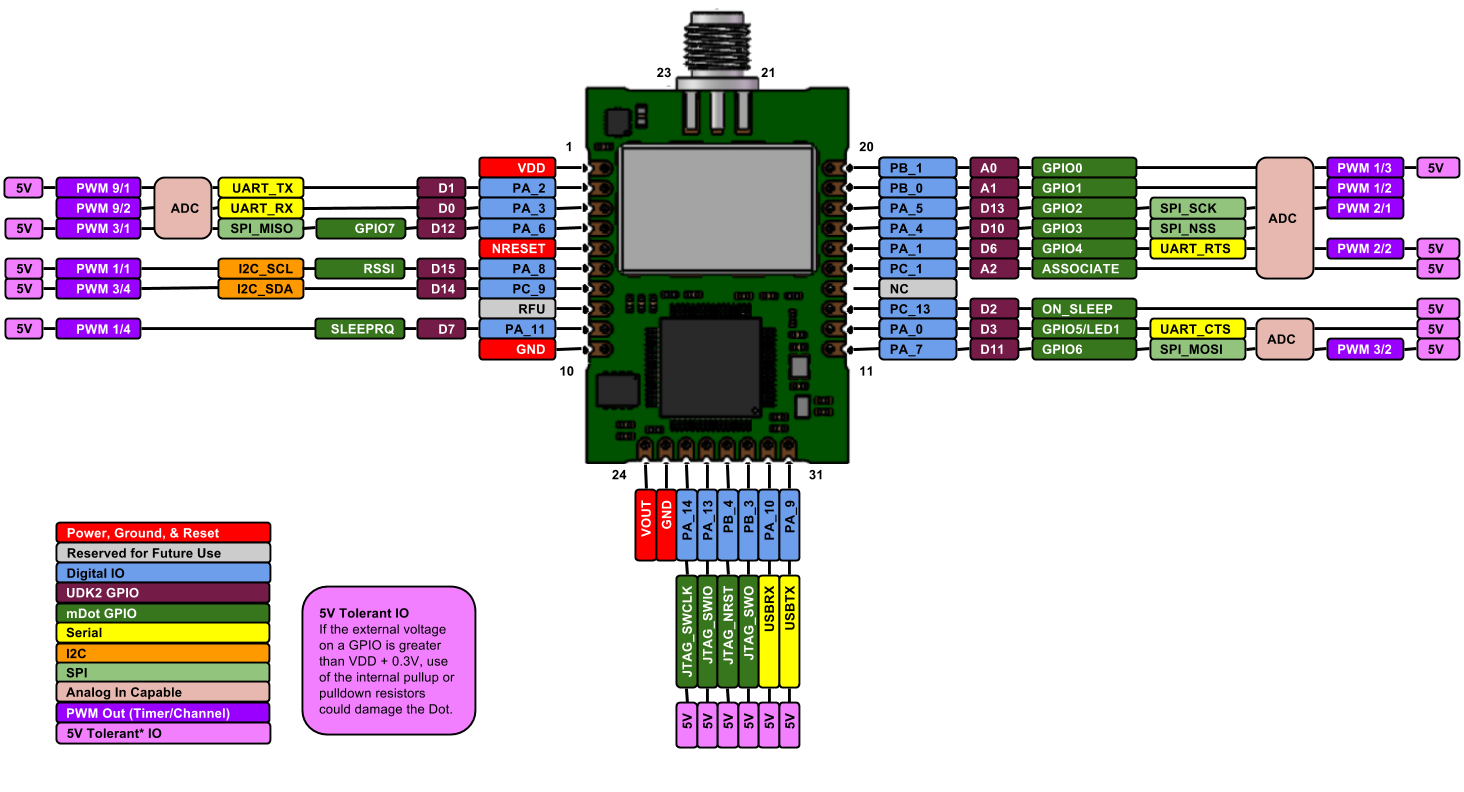 Pin numbers 5 - 9 are internally used as interrupts from the LoRa radio and may not be configured as external interrupts. Doing so will break the LoRa functionality of the mDot and cause undefined behavior.

Example: If the GPIO5 (PA_0) pin is configured to wake the mDot from low power modes, GPIO1 (PB_0) may not be configured as an InterruptIn. Doing so will cause the WAKE pin to not wake the mDot as desired.

Dot Library versions 4.x.x are compiled with mbed-os 6. Stable production build is hosted on mbed and GitHub for convenience.

Dot Library versions 3.x.x are compiled with mbed-os 5. Stable production build is hosted on mbed and GitHub for convenience.

This build of libmDot is stable, tested, and suitable for deployment scenarios. It is hosted on mbed and GitHub for convenience.

This build of libmDot contains bug fixes and new feature development which may not be complete. It is not guaranteed to be stable or well-tested and is not suitable for deployment scenarios. It is hosted on mbed and GitHub for convenience.

The following code demonstrates the basics for setting up the LoRa stack and enabling FOTA support.

Setting up the mDot instance

The Dot Library starts two threads. One to manage LoRa radio, MAC, and link layers. Another to manage LoRa application layer for multicast and FOTA. Each of these threads are allocated 2560 bytes for thier stacks.

Starting with mbed-os 6, the mDot bootloader is no longer automatically merged with the application. A bootloader binary must be specified in the project's mbed_app.json file. See this article, our example programs, and here for details.

FOTA requires an MTS Bootloader to be included in the project.

The mDot ships from the factory pre-loaded with our custom AT Command Firmware. This firmware provides a serial AT command interface for configuring and using the mDot. It can be used in production when using a separate host processor that controls the mDot via AT commands and during development for testing LoRa transmissions. It is available here. AT command documentation is available here.

It is possible to compile for the mDot and debug them on the mDot using the Eclipse IDE. See our wiki page for more information.

The mDot includes a bootloader which allows applications to be upgraded OTA (Over The Air) or via serial without the need for a developer board. See this article and this wiki page describing how the bootloader can be used for more information.

Bootloader binaries are available on GitHub.

The DK boards for the mDot require the ST-Link driver to be installed before the debug serial port can be used on Windows PCs. This driver is different from the mbed Windows serial driver.

Download the appropriate "Hello World!" binary. Because the UDK2 and MDK have the LED connected to different pins on the mDot, we've provided a binary for each option:

In its current state, the program will blink the D3 LED on a UDK2 board. To blink the RSSI LED on a MDK board, change the DigitalOut pin from LED1 to XBEE_RSSI.

More information can be found here.

1 answer
Can I measure noise level or SNR using mDot?

To compile a program for this board using Mbed CLI, use mts_mdot_f411re as the target name.