The mbed HDK and mbed-enabled hardware support the CMSIS-DAP debug interface, which consists of an abstraction of the Cortex Debug Access Port (DAP) command set over a driver-less USB HID connection. This provides a USB connection to the DAP that major tool vendors have started to support. It even provides the flexibility for users to write their own debugger, or debug script using the USB bindings in languages like Python.

CMSIS-DAP provides a standardized way to access the Coresight Debug Access Port (DAP) of an ARM Cortex microcontroller via USB. CMSIS-DAP is generally implemented as an on-board interface chip, providing direct USB connection from a development board to a debugger running on a host computer on one side, and over JTAG (Joint Test Action Group) or SWD (Serial Wire Debug) to the target device to access the Coresight DAP on the other.

Why the need for CMSIS-DAP ?¶

There are several reasons concerning the introduction of CMSIS-DAP:

How CMSIS-DAP can be integrated ?¶

As mentioned earlier, CMSIS-DAP has to be implemented on an Interface Chip. This chip provides the link between the host computer (over USB for instance) and the target that has to be debugged (over SWD or JTAG).

On the mbed hardware, the CMSIS-DAP firmware has been implemented on the mbed interface as part of the mbed HDK. In addition to the Mass Storage and the Virtual Serial port interfaces, a HID endpoint is used to establish a CMSIS-DAP communication link with a debugger. 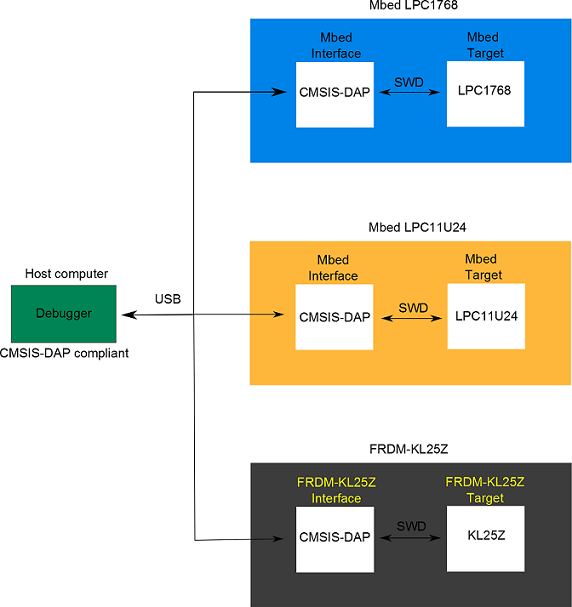 Packets are exchanged between the host debugger and the Interface Chip. Basically, the host sends a command and the debug unit sends the response of the command.

Different types of commands can be issued by the host:

Let's say that a debugger needs to read the value at a specific location in memory. The following commands have to be sent by the host:

CMSIS-DAP provides a standardized interface for debuggers. It will probably become the de-facto standard which debuggers and debug units will implement. This is why mbed chose to take advantage of this new standard to provide debug capabilities. For instance Keil uVision which combines an IDE, debugger and simulation environment already supports CMSIS-DAP. To try the new mbed interface with CMSIS-DAP, visit this page for more details :